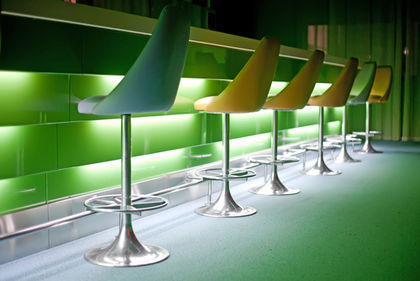 This business plan for a bar with entertainment highlights the advantages and cost benefits of an owner-managed business. The proposed business is in an Economic Empowerment Zone, and notes this as one of the reasons for the request for loan.

The Plugged Nickel Bar, on South Cassopolis in Detroit's new Empowerment Zone, will become a high quality venue for original creative arts. Live music, original theatre, performance art, and comedy will be featured, along with displays by local artists. With high quality entertainment and attention to detail, it will become a destination for patrons of the arts. Live recordings of performances will be released on CD and cassette. The diversity of the metro area will be utilized, to provide a greater variety of entertainment currently available anywhere. Well-lit parking will be available, and Chinese food from Wang's Restaurant will be available until 12:00 a.m. The business will be open Thursday through Saturday nights.

Original music venues are gaining in popularity due to the past success of alternative rock, and the "back to basics" approach that many musicians are taking. The Plugged Nickel will recreate the energy, experimental feel, and diversity that popularized alternative rock in the first place, before it was homogenized by corporate interests. People want something that is new and different, as what was once avant garde but has become mainstream. Current patrons of clubs would find new excitement, and others would be encouraged.

Most clubs center on one style of music or performance, or perhaps devote different nights to particular styles. Sometimes this works, but other times there are complaints that it all sounds the same. This complaint will never be heard at the Plugged Nickel. On any given night, customers will experience at least two completely different acts. It will be normal to have an evening that might include classical, jazz, latin, rock, blues, bluegrass, folk, or any named or as yet unclassified forms of music. These could be combined with performance art, comedy, poetry or original theatre for a completely new experience.

In order to complete renovation of the building at 772 South Cassopolis in Detroit's Empowerment Zone, I am requesting a loan of $ 10,000, at an interest rate of 10%, amortized over five years.

The Plugged Nickel bar, at 772 South Cassopolis, was opened in 1936. In 1990, the name was changed, and the business closed in 1993. Over the years, through changes in management and ownership, it has had a wide variety of themes and customers. Despite some damage due to roof leakage and vandalism, classic features remain, including the bar area, mirrors, and indirect lighting. In addition, the stage, stage lights, and dressing rooms are complete and appropriate to the proposed new usage. The bar building, two additional attached storefronts, and an adjacent large storage garage were purchased in March, 1995 by Nigel Y. Mea. There are no mortgages, liens, or back taxes owed on the property.

In 1988, Mr. Mea was a student at the Berklee College of Music in Boston, Massachusetts, with the aspiration of eventually making a living as a producer and sound engineer. Upon viewing the difficulties of life as a "starving artist," he returned to the University of Minnesota to finish dual degrees in Mathematics and English, and start his own production company. Metro Productions began in August 1988, as a small recording studio, and soon branched out into live music production, involving booking and promotion of acts, as well as operation of sound reinforcement equipment. It also provided income to help complete the degrees. In 1990, Mr. Mea graduated and moved to the Detroit area for a highly successful career as a Systems Engineer at Corporate Data Systems, and more recently, Midwest Research. Throughout this time, he continued as a performing musician, producer, and sound engineer, scheduling and promoting local shows. As the business will be operating only three or four nights per week, current professional employment will be maintained.

These establishments, though similar in initial appearance, do not feature the diversity that will be unique to the Plugged Nickel.

Items listed below were previously purchased by Nigel Y. Mea, and will become part of the assets of the Plugged Nickel.