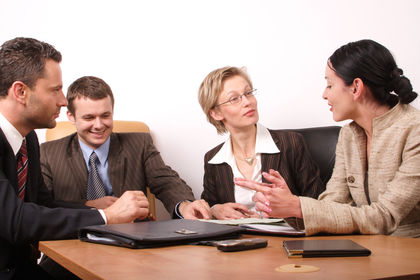 Arbitration and mediation are parts of the labor relations process. Arbitration is the procedure by which parties agree to submit their disputes to an independent neutral third party, known as an arbitrator. Although there are several types of arbitration, labor arbitration is the dispute resolution procedure used in labor relations. Mediation also involves the active participation of a neutral third party whose role is to facilitate the dispute resolution process and to suggest solutions to resolve disputes. The term conciliation is often used interchangeably with mediation, but conciliation generally refers to the third party who brings the disputing parties together. While the mediator suggests possible solutions to the disputing parties, the arbitrator makes a final decision on the labor dispute which is binding on the parties.

As a process, arbitration predates English common law and has been called the oldest form of dispute settlement. King Solomon was an arbitrator and arbitration was used to settle differences during the Greco-Roman period. George Washington was an advocate of arbitration and, in his will, mandated using the process if disputes arose over his estate. The use of arbitration in labor disputes was a common practice in the late 19th century but developed more rapidly after World War II as a substitute for work stoppages.

During World War II, the National War Labor Board gave great impetus to the use of arbitration. The board heard over 20,000 labor disputes during the war and frequently mandated that future cases employ arbitration. The president's National Labor-Management Conference of 1945 also recommended the application of the arbitration process to settle labor disputes.

In the collective bargaining process, labor arbitration is generally the final stage of resolution. Labor unions and management develop a collective bargaining agreement that details the rights of labor, the responsibilities of management, and the ultimate relationship between the two. Nearly all (96 percent) of these collective bargaining agreements provide for arbitration as the final step in dispute resolution. Arbitration can represent either all employees covered by the agreement or a specific individual on one side and management concerns on the other. Arbitration holds advantages over both strikes and litigation as a means of resolving disputes. Even the U.S. Supreme Court has determined that arbitration is the preferred method of resolution in reaching a workable solution to labor problems. A major advantage to arbitration is the cost, especially when compared to the expense of litigation.

There are, several organizations and agencies directly involved in arbitration and arbitration issues including the National Academy of Arbitrators (NAA), the American Arbitration Association (AAA), and the Federal Mediation and Conciliation Service (FMCS). The NAA was founded in 1947 as a nonprofit organization to foster high standards for arbitration and arbitrators and to promote the process. Through seminars, annual conferences, and educational programs, the NAA works to attain its objectives. The AAA is also nonprofit and offers its services for voluntary arbitration to meet its objective: promoting the use of arbitration in all fields. Meetings and educational programs highlight AAA efforts, although the organization does not arbitrate. The FMCS maintains a roster from which arbitrators can be selected and suggests procedures and guidelines to enhance the arbitration process.

The labor arbitration process involves an arbitrator and representatives of both labor and management. The arbitrator is either a permanent arbitrator, an independent arbitrator selected by the two parties to resolve a particular grievance, or an arbitrator selected through the procedures of the AAA or FMCS. A board of arbitrators can also be used in a hearing. After selection, the arbitrator then hears from both sides of the issue with testimony and evidence provided in much the same way as a court proceeding. Upon completion of the arbitration hearing, the arbitrator reviews the evidence, testimony, and the collective bargaining agreement, considers principles of arbitration, and makes a decision. The arbitrator's decision is generally rendered within 60 days, and, when all parties agree, is submitted for possible publication by one of several commercial publishers, either the U.S. Bureau of National Affairs (Labor Arbitration Reports), the Commerce Clearing House (Labor Arbitration Awards), or other sources. Fewer than 10 percent of these decisions are published. While intended to be binding or a final decision, arbitration findings can be appealed, but few are overturned.

In contrast to arbitration, mediation is a process whereby the parties involved have to solve the dispute, although the mediator does suggest various proposals to help the parties find solutions. In mediation, the various needs of the conflicting sides of an issue are identified, and ideas and concepts are exchanged until a viable solution is proposed by either of the parties or the mediator. Rarely does the mediator exert pressure to accept a solution. The role, rather, is to encourage communication and exchange in order to resolve the dispute. The key to the concept of mediation is neutrality.

Like arbitration, mediation is deeply rooted in history. English essayist and scientist Francis Bacon (1561-1626) advocated the mediation of disputes. Since the essence of mediation is compromise, it could be said that much of American history is the history of mediating disputes. As a process in labor disputes, mediation is a basic tenet of the development of American society in the 20th century. Congress created the Federal Mediation and Conciliation Service in 1947 to cut down on strikes and ease tension in labor disputes. Over the last 15 years, the popularity of mediation as a means of dispute resolution has grown enormously, with mediation increasingly being used to resolve problems other than labor disputes. In 1980, for example, the state of California adopted mediation in child custody and visitation conflicts. A disagreement over a proposed flood control dam in the state of Washington was addressed by mediation in 1983. More than 160 environmental disputes before 1985 involved the use of mediators. The obvious success of the concept has been cited as the best hope for eliminating racial violence and lesser crimes. Many police departments and law enforcement agencies now employ mediators as a regular means of solving disputes. Many attorneys see mediation as having unlimited potential in what has become a litigious society. Although mediation's critics have been quick to level sharp barbs at its weaknesses, the process may well shape the future of conflict resolution on all fronts.

In the long and often bitter history of labor disputes in the United States, arbitration and mediation have been widely used as means of dispute resolution. Unions and companies hoping to avoid a legal resolution to a labor dispute generally resort to one of these methods. The processes are now integral parts of the U.S. business environment and in use far more commonly than the general public realizes.

Arbitration and mediation are considered alternative dispute resolution (ADR) methods, but so are conciliation, fact finding, med-arb, med-fact finding, facilitation, minitrials, negotiation, and the use of ombudspersons. ADR is simply defined as any process involving a neutral party. The purpose of any of these, like arbitration and mediation, is to resolve complaints efficiently and avoid litigation. Although many labor representatives and trial lawyers oppose ADR, courts are generally in favor of their use.

Kagel, Sam, and Kathy Kelly. The Anatomy of Mediation: What Makes It Work. Bureau of National Affairs, 1989. McDermott, E. Patrick. Alternative Dispute Resolution in the Workplace: Concepts and Techniques for Human Resource Executives and Their Counsel. Westport, CT: Quorum Books, 1996.