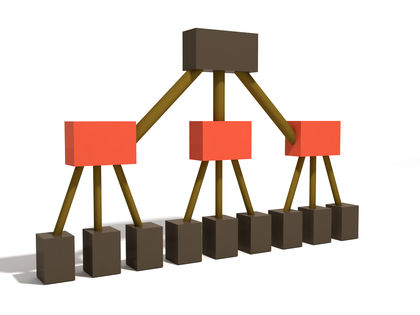 For many products and services, their manufacturers or providers use multiple channels of distribution. Personal computers, for example, might be bought directly from the manufacturer—over the telephone, via direct mail, or through the company's web site on the Internet —or through several kinds of retailers, including independent computer stores, franchised computer stores, and department stores. In addition, large and small businesses may make their purchases through other outlets.

BENEFITS OF INTERMEDIARIES IN
CHANNELS OF DISTRIBUTION

If selling from the manufacturer to the consumer were always the most efficient way, there would be no need for channels of distribution. Intermediaries, however, provide several benefits to both manufacturers and consumers: improved efficiency, a better assortment of products, routinization of transactions, and easier searching for goods as well as customers.

In terms of efficiency there is an effect of diminishing returns as more intermediaries are added to the channels of distribution. If, in the example above, there were 3 wholesalers instead of only 1, the number of essential contacts increases to 75: 15 contacts between 5 manufacturers and three wholesalers, plus 60 contacts between 3 wholesalers and 20 retailers. Of course this example assumes that each retailer would order from each wholesaler and that each manufacturer would supply each wholesaler. In fact geographic and other constraints might eliminate some lines of contact, making the channels of distribution more efficient.

Intermediaries provide a second benefit by bridging the gap between the assortment of goods and services generated by producers and those in demand from consumers. Manufacturers typically produce many similar products, while consumers want small quantities of many different products. In order to smooth the flow of goods and services, intermediaries perform such functions as sorting, accumulation, allocation, and creating assortments. In sorting, intermediaries take a supply of different items and sort them into similar groupings, as exemplified by graded agricultural products. Accumulation means that intermediaries bring together items from a number of different sources to create a larger supply for their customers. Intermediaries allocate products by breaking down a homogeneous supply into smaller units for resale. Finally, they build up an assortment of products to give their customers a wider selection.

A third benefit provided by intermediaries is that they help reduce the cost of distribution by making transactions routine. Exchange relationships can be standardized in terms of lot size, frequency of delivery and payment, and communications. Seller and buyer no longer have to bargain over every transaction. As transactions become more routine, the costs associated with those transactions are reduced.

The use of intermediaries also aids the search processes of both buyers and sellers. Producers are searching to determine their customers' needs, while customers are searching for certain products and services. A degree of uncertainty in both search processes can be reduced by using channels of distribution. For example, consumers are more likely to find what they are looking for when they shop at wholesale or retail institutions organized by separate lines of trade, such as grocery, hardware, and clothing stores. In addition producers can make some of their commonly used products more widely available by placing them in many different retail outlets, so that consumers are more likely to find them at the right time.

WHAT FLOWS THROUGH THE
CHANNELS OF DISTRIBUTION

There are also a number of support functions that help channel members perform their distribution tasks. Transportation, storage, insurance, financing, and advertising are tasks that can be performed by facilitating agencies that may or may not be considered part of the marketing channel. From a channel management point of view, it may be more effective to consider only those institutions and agencies that are involved in the transfer of title as channel members. The other agencies involved in supporting tasks can then be described as an ancillary or support structure. The rationale for separating these two types of organizations is that they each require different types of management decisions and have different levels of involvement in channel membership.

TREND TOWARD CONSOLIDATION OF
DISTRIBUTION CHANNELS

In some industries there has been a noticeable trend toward consolidation of distribution channels. Through mergers and acquisitions some companies have achieved ownership of two or more channels of distribution, as when a distributor or wholesaler acquires a retailer. As a result of this type of consolidation, channel members who are closest to the consumer, such as retailers, have acquired more control. Historically, it was the manufacturer who invented and controlled the channels of distribution. Now, end-user dominated channels are replacing those invented and controlled by the manufacturer. One example has been the explosion of discount outlet malls, which obtain high-image products directly from manufacturers and sell them at a discount.

Manufacturers have countered that trend by opening historically closed channels of distribution. That has made the lines of distinction between manufacturers, retailers, and direct-to-consumer sellers less clear. Manufacturers such as Apple Computer and Nike have opened their own retail outlets, thus blurring the line that once separated manufacturers from retailers. The distinction between retailers and direct-to-consumer sellers, or catalogers, has also become blurred as companies such as Eddie Bauer, Spiegel, and Victoria's Secret build one brand across both channels. In addition, some catalog companies such as J. Crew and Lands' End have opened retail outlets. The overall result is that there are new channel options for marketers to consider.

THIS SITE GIVE ME INFORMATION THAT I NEED ESPECIALLY IN DOING MY ASSIGNMENTS. .