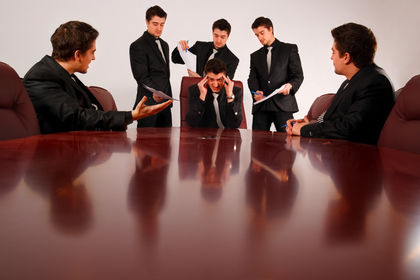 Conflict management is the application of strategies to resolve incompatible objectives in a positive manner. Traditionally, conflict was seen as negative. "In recent years, however," as observed by Borisoff and Victor, "we have come to recognize and to acknowledge the benefits dealing with conflict affords. Because of our differences, we communicate, we are challenged, we are driven to find creative solutions to problems."

THE DEVELOPMENT OF CONFLICT
MANAGEMENT STRATEGIES

Until the early 1960s, virtually all conflict was perceived as negative. Resolution of conflict had one basic strategy: a win or lose scenario. Since the loser in this scenario inevitably felt resentment, the typical managerial technique for dealing with conflict was to avoid it. Avoidance, in turn, tended to make the avoided parties feel neglected. Moreover, avoidance rarely resolved the underlying incompatible objectives at the heart of the conflict so that the source of the conflict remained, surfacing with the next problematic situation. Thus, these strategies did not prove particularly valuable in interpersonal work settings.

In the early 1960s, R.R. Blake and J.S. Mouton developed a managerial grid for identifying conflict; these included "handling strategies." The grid illustrated how strategies for handling conflict fell into differing levels of assertiveness and cooperation.

Smoothing involved the loser of the win-lose configuration and represented high cooperation with the needs of others along with low assertiveness of one's own needs. The winner of the win-lose model undertook forcing, which included low cooperation and high assertiveness. Traditional conflict avoidance (withdrawal) was seen as low in both assertiveness and cooperation. Compromise was seen as the center of the grid; that is, moderate in both assertiveness and cooperation. Compromise was simultaneously winning and losing, a situation in which neither party was completely satisfied or dissatisfied. In their last mode, problem-solving, Blake and Mouton suggested a new approach altogether. Problem-solving created a win-win option combining both high assertiveness of ones own needs coupled with high cooperation in solving the needs of others.

The first four conflict-handling modes represented variations of win-lose scenarios, but with the identification of how each could be a strategic decision for handling a particular conflict situation. For example, in conflict for market share between two companies fighting for survival, one might choose a forcing strategy with a winner and loser since the goal would be to eliminate the loser. Such a technique would not work very well within interpersonal conflict in an office environment, however, since both parties would continue to need to work together. Smoothing or intentionally losing could even be useful in conflicts over issues one did not feel particularly strongly about when used to help out a fellow worker who faced stress from other areas. Even conflict avoidance could be seen as useful in an attempt to avoid broaching a subject with a person under temporary emotional duress. Compromise could be useful when the issue was too small to justify the time and effort needed to solve the problem at the heart of the conflict.

Conflict as a problem-solving technique, however, represented an ideal mode for all types of conflict management. In such cases, conflict can be seen as a managerial tool, pointing out to the parties involved the underlying problems faced by the organization. Through collaborative behavior, the parties combine their efforts to find creative solutions to old problems.

The other four conflict-handling modes (as variations of the win-lose model) represent only conflict interventions. Problem-solving as a conflict-handling mode, by contrast, represents an attempt to harness conflict as a positive force and to use conflict as a managerial tool to resolve otherwise incompatible objectives within the organization. The problem-solving mode of handling conflict, therefore, can be seen less as a conflict intervention than true conflict management.

Conflict management as a problem-solving device is an ongoing procedure. In its most effective form, it involves continual communication and supervision. As Borisoff and Victor note, "conflict-handling behavior is not a static procedure; rather it is a process that requires flexibility and constant evaluation to truly be productive and effective."

Within this process, one can identify various barriers based on spoken strategies, writing styles, and nonverbal communication styles that can cloud the communication needed to reach creative solutions to conflict. These barriers are often further distorted by differences in communication based on gender and cultural background. When these barriers impede communication, they often result in misreading by the parties involved. This misreading, in turn, may easily lead one to perceive conflict based on misunderstood behavior where no conflict actually exists. Miller and Steinberg call this misreading "pseudoconflict", in that it is perceived rather than true conflict. Much of what is thought to be an actual conflict is the product of such pseudoconflict.

In the assessment step, the parties gather appropriate information regarding the problem. They select which of the conflict-handling modes would be most appropriate for the situation. They determine what is and is not at the heart of the problem, what they might be willing to compromise on, and what each party actually wants.

The acknowledgement step is one in which each party attempts to hear out the other. Acknowledgement allows both parties to build the empathy needed for the motivation of a synergistic solution to the problem.

The attitude step attempts to eliminate sources of pseudoconflict. Prejudices regarding cultural differences or gender-linked communication styles are recognized. Differences in communication styles (written, nonverbal, or verbal) are examined in the attempt to remain objective to both parties' concerns simultaneously.

The action step is the implementation of the conflict-handling mode selected. If that is the problem-solving mode, one communicates the possibilities for a solution while building trust and continually soliciting feedback on positions reached. At the same time, one must read cues in the other party to anticipate concerns while remaining conscious of one's own communicative behavior and seeking productive solutions.

Finally, in the analysis step, decisions are reached, summarized, and then reviewed to establish that the needs of all parties have been met (if possible). Additionally, the analysis step sets the process side of conflict management into motion as something that is ongoing by attempting to anticipate and check for short-term and long-term effects from the solution reached.