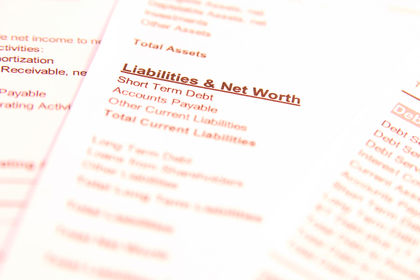 One of the most basic accounting assumptions is the concept that a business is a going concern. Unless there is significant evidence to the contrary, it is assumed that a specific business enterprise will continue to operate for an indefinite period, or at least for the "foreseeable future"—long enough both to meet its objectives and fulfill its commitments. Importantly, while the going-concern concept assumes that the firm will continue to operate for the foreseeable future, it in no way implies that the firm will make a profit.

The practice of accounting is based on generally accepted accounting principles (GAAP). These are assumptions, practices, and concepts that provide the foundation for measuring and reporting the results of business activities. As logic would dictate, they greatly influence the reported financial position of a firm; thus, simultaneous audits of the same firm can produce widely varying valuations for assets, liabilities, and equity if the audits are based on different fundamental accounting assumptions. Two concepts inherent in GAAP are historical valuation of assets and liabilities and the concept of going concern.

HISTORICAL VALUATION AS
SUPPORTED BY THE GOING CONCERN
CONCEPT

The assumption that a business is a going concern supports the practice of valuing assets and liabilities at their historical cost. The principle of historical cost dictates that assets and liabilities must be entered into accounting records at the cost the company paid for them when they were initially acquired, even if the market value changes significantly. For example, if a firm purchases land for $300,000, assets totaling that amount of money would appear on its financial statements. If the value of the land increased to $400,000, the historical valuation concept would dictate that the value of the land would continue to be carried on the books at $300,000.

Historical valuation is founded on the assumption that a business is a going concern. When a firm buys assets—such as land, machinery, or buildings—it does this with the assumption that using these assets will produce income. In other words, the firm does not intend to discontinue its operations and resell these assets. Moreover, it is assumed that the firm will be in existence long enough to fully use these assets and derive the complete benefit inherent within them. Thus, the prices at which the resources could be sold at the market value (after a period of use) would only be significant to financial reports if the business expected to cease operations at once and liquidate its assets. Assuming that the firm is a going concern, it is logical that the firm values these assets at their historical costs and not adjust them for any subsequent change in value. It follows that the current liquidation value of these assets is not important and that the firm uses the original, or historical, costs of assets and liabilities on its financial statements.

For example, on any given day, a textile manufacturer has shirts at various stages in the production process. If the business were liquidated, the partially completed goods would have little value. Accounting does not attempt to value the firm's work-in-process at its current worth. Rather, accounting assumes that the business is a going concern and that the process will be completed; thus, the amount for which the partially completed shirts could be sold is irrelevant.

In 1988 a significant change occurred in the auditing standards with the imposition of a new requirement relating to the going concern assumption. The new standard was spelled out in Statement of Auditing Standards (SAS) Number 59 of the Auditing Practices Board. It required auditors, in every audit, to explicitly evaluate whether there is substantial doubt about a company's ability to continue as a going concern over the coming year. If the auditor has such doubt, he or she must state that opinion in the audit's report paragraph.

The previous standard did not require auditors to explicitly evaluate a company's ability to continue its operations as part of every audit. The new standard was developed in part to meet investors' concerns about having an early warning signal from auditors for companies in financial distress. Further clarification of the new standard appeared in SAS-130, issued at the end of 1994, which asked that auditors play an active role in assessing a company's ability to remain a going concern.

The new standard was codified into law as part of the Private Securities Litigation Reform Act of 1995. Under the new standard, auditors are required to look at a company's management plans, strategies, and financial and business stress. They are responsible for understanding and assessing existing conditions, including those of other companies in the industry and the economy in general. They are not, however, expected to predict future conditions or events.

Studies regarding the effectiveness of SAS-59 have shown that overall auditor reporting after SAS-59 may have improved. In one study, a larger proportion of bankrupt companies received a going-concern audit opinion following the issuance of SAS-59 than before. A later study that examined going-concern audit opinions before and after SAS-59 revealed that a similar proportion of companies that received such reports before and after SAS-59 ended up filing for bankruptcy.

In infrequent cases, the auditor may be unable to express an opinion about the company's ability to remain a going concern and, thus, may issue a disclaimer to that effect. This situation can occur if limitations are imposed on the scope of the audit by the company's management. Aside from a disclaimer, the auditor can also write an adverse opinion, if he or she concludes that the financial statements do not present the firm's situation fairly. Auditors write adverse opinions if the company does not use GAAP or if the firm is no longer a going concern. Disclaimers and adverse opinions are serious situations and usually result in suspension of trading in the firm's securities.

Geiger, Marshall A., and others. "Going-Concern Audit Report Recipients before and after SAS No. 59." National Public Accountant, October 1998, 24-25.