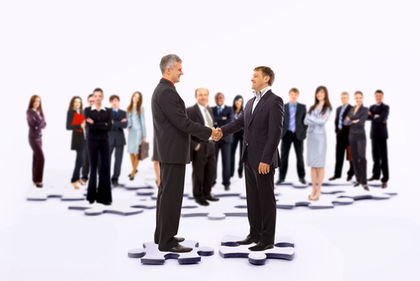 Holding companies and their subsidiaries can establish pyramids, whereby one subsidiary owns a controlling interest in another company, thus becoming its parent company. While three to five levels are common in corporate pyramid structures, as many as 60 levels have been known to exist in practice. In the case of public utility holding companies, regulations of the Securities and Exchange Commission allow only two levels of holding companies in addition to the operating subsidiaries.

Another advantage is that shares of stock in the subsidiary company are held as assets on the books of the parent company and can be used as collateral for additional debt financing. In addition, one company can acquire stock in another company without approval of its stockholders; mergers and consolidations typically require stockholder approval. Holding companies and their subsidiaries are considered separate legal entities, so that the assets of the parent company and the individual subsidiaries are protected against creditors' claims against one of the subsidiaries. However, holding companies and their subsidiaries may be considered a single economic entity, and consolidated financial statements are then prepared for the entire structure.

For tax purposes, the parent company must own at least 80 percent of the voting stock in another company in order to be able to file a consolidated tax return. The tax advantage here is that losses from one subsidiary can be used to offset profits from another subsidiary and reduce the overall taxable corporate income on the consolidated tax return. A significant disadvantage occurs when a company holds less than 80 percent of the subsidiary's voting stock; in that case separate tax returns must be filed for the parent and the subsidiary, and intercorporate dividends are subject to an additional tax.

Bank holding companies are subject to regulation by the Board of Governors of the Federal Reserve System as well as to regulations issued by the Federal Deposit Insurance Corporation (FDIC), Office of Thrift Supervision (OTS), and Office of the Comptroller of the Currency (OCC). Through holding companies, national banks are allowed to conduct activities in subsidiaries that they may not conduct directly, such as securities underwriting and real estate development, under the OCC's operating subsidiary rule. The Federal Reserve Board, whose rules supersede those of other agencies with respect to bank regulation, restricts bank investments in subsidiaries to 20 percent of the parent company's capital, with no single subsidiary allowed to receive more than 10 percent of the capital.

In addition, the acquisition of new subsidiaries and the formation of new holding companies are subject to the pre-notification requirements of the Antitrust Improvement Act of 1976, which provides that the U.S. Department of Justice and the Federal Trade Commission (FTC) be notified in advance of all proposed mergers and acquisitions. Finally, corporations must specifically be granted the power to acquire stock in another corporation, through their corporate charter as well as through state laws of incorporation. The first state to grant corporations the power to acquire stock in other corporations was New Jersey in 1889.

Internationally, Japan passed a new law in 1997 that eliminated a 50-year ban on holding companies in that nation. The new law requires firms with assets of $30 billion or more to issue a report on the setting up of a holding company. It was expected that being allowed to set up holding companies would allow Japanese firms greater flexibility in terms of creating units or subsidiaries with different pay systems and labor forces than the parent company.

In 1995 China established new rules regarding foreign companies that set up holding companies as vehicles for investment in China. Under the new rules, such firms must have a total asset value of at least $400 million for one year prior to application or have already set up at least 10 foreign investment enterprises. Additional rules were issued to limit the scope of business for projects involving foreign holding companies.

This Article is quite impressive. Kudos to the writer!
2
Minh

Dear Sir/Madam,
We would like to set up regulations for management of our corporation. Could you pls send us a sample.
Kind regards,
JohnMinh
3
Lolita Johnstone

Hello, thank you for this very informative article. You surely know how to relay a comprehensive information in a short form. It tells me that you are experienced and knowdgeable! If you are self-employed, I'm sure you are very successfull, and if you are an employee, your employer must be proud of you, and you must be on the top of the ladder with "honors' lol!
4
Tayo

Thanks for excellent explanation.would you please explane some more about other ways of managing companies.