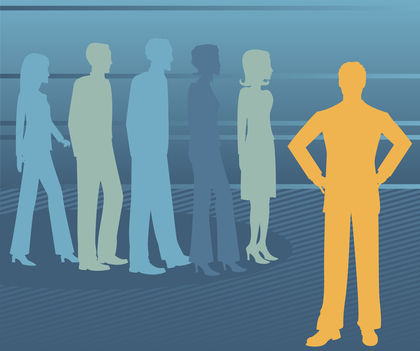 Management succession planning is the process of preparing an organization for a transition in leadership. Succession planning is helpful when a management change occurs due to unforeseen circumstances, such as the sudden death of a corporation's chief executive officer (CEO). But it is also important in ensuring a smooth transfer of power under normal circumstances. "Management succession planning will allow an institution to keep moving forward when the inevitable occurs," consultant Rhonda Cooke told America's Community Banker. "Retirement, career mobility, ill health, termination, or death will require the appointment of a new chief executive officer at some point."

One important aspect of management succession planning involves evaluating the skills of people in the organization and identifying those employees who have the potential to ascend to top management roles. In this way, succession planning encourages staff development and sends a message to employees that the organization is serious about developing people. It may also persuade talented employees to remain with the company rather than looking elsewhere for growth opportunities. Grooming a successor from within the company can save the time and expense of hiring a new leader from outside. It also aids in continuity, as an insider might be more likely to follow through with current plans and strategies.

The key to management succession planning is preparing a written succession plan. This document provides for the continued operation of a business in the event that the owner—or a key member of the management team—leaves the company, is terminated, retires, or dies. It details the changes that will take place as leadership is transferred from one generation to the next. In the case of small businesses, succession plans are often known as continuity plans, since without them the businesses may cease to exist. Succession plans can provide a number of important benefits for companies that develop them. For example, a succession plan may help a business retain key employees, reduce its tax burden, and maintain the value of its stock and assets during a management or ownership transition. Succession plans may also prove valuable in allowing a business owner to retire in comfort and continue to provide for family members who may be involved with the company.

Despite the many benefits of having a succession plan in place, many companies neglect to develop one. This oversight may occur because the CEO or business owner does not want to confront his or her own mortality, is reluctant to choose a successor, or does not have many interests beyond the business. Although fewer than one-third of family businesses survive the transition from the first generation to the second—and only 13 percent remain in the family for more than 60 years—just 45 to 50 percent of business owners establish a formal succession plan. "Succession and the planning it entails is equivalent to planning one's own wake and funeral," as Ernesto J. Poza, president of an Ohio-based family business consulting firm, remarked in Industrial Distribution. "But the fact is that the transfer of power from the first to the second generation seldom happens while the founder is alive and on the scene. The succession transition is the most agonizing change I have ever seen CEOs and top management teams confront." Up to 40 percent of American businesses may be facing the management succession issue at any given time.

Experts claim that management succession planning should ideally begin when the CEO or business owner is between the ages of 45 and 50 if he or she plans to retire at 65. Since succession can be an emotionally charged issue, sometimes the assistance of outsider advisers and mediators is required. Developing a succession plan can take more than two years, and implementing it can take up to ten years. The plan must be carefully structured to fit the company's specific situation and goals. When completed, the plan should be reviewed by the company's lawyer, accountant, and bank.

"One of the main reasons business owners should take the time to create a successful continuity plan is that they should want to get out of the business alive, with as much money as possible," Joanna R. Turpin noted in Air Conditioning, Heating, and Refrigeration News. To do this, the business owner has three basic options: sell the company to employees, family members, or an outsider; retain ownership of the company but hire new management; or liquidate the business. An employee stock ownership plan (ESOP) can be a useful tool for the owner of a corporation who is nearing retirement age. The owner can sell his or her stake in the company to the ESOP in order to gain tax advantages and provide for the continuation of the business. If, after the stock purchase, the ESOP holds over 30 percent of the company's shares, then the owner can defer capital-gains taxes by investing the proceeds in a qualified replacement property (QRP). QRPs can include stocks, bonds, and certain retirement accounts. The income stream generated by the QRP can help provide the business owner with income during retirement.

In the Small Business Administration publication Transferring Management in the Family-Owned Business, Nancy Bowman-Upton emphasizes that succession should be viewed as a process rather than as an event. She describes four main stages in the management succession planning process: initiation, selection, education, and transition. In the initiation phase, possible successors learn about the business. It is important for the CEO or business owner to speak openly about the business, in a positive but realistic manner, in order to transmit information about the company's values, culture, and future direction to the next generation.

The selection phase involves actually designating a successor among the candidates for the job. Because rivalry often develops between possible successors—who, in the case of a family business, are likely to be siblings—this can be the most difficult stage of the process. For this reason, many business owners either avoid the issue or make the selection on the basis of age, gender, or other factors besides merit. Instead, Bowman-Upton recommends that the business owners develop specific objectives and goals for the next generation of management, including a detailed job description for the successor. Then a candidate can be chosen who best meets the qualifications. This strategy helps remove the emotional aspect from the selection process and also may help the business owners feel more comfortable with their selection. The decision about when to announce the successor and the schedule for succession depends upon the business, but an early announcement can help reassure employees and customers and enable other key employees to make alternative career plans as needed.

Once a potential successor has been selected, the company then enters the training phase. Ideally, a program is developed through which the successor can meet goals and gradually increase his or her level of responsibility. The owner or CEO may want to take a number of planned absences so that the successor has a chance to actually run the business for limited periods. The training phase also provides the business owner or board of directors with an opportunity to evaluate the successor's decision-making processes, leadership abilities, interpersonal skills, and performance under pressure. It is also important for the successor to be introduced to the business owner or CEO's outside network during this time, including customers, bankers, and business associates.

In their book Family Business Succession: The Final Test of Greatness, Craig E. Aronoff and John L. Ward outline a number of steps companies should follow in preparing for succession. These steps include:

Throughout all these stages of preparation, Aronoff and Ward note, communication is key.

A final consideration in succession planning is for the owner or CEO to decide what he or she will do after concluding involvement in the business. This step, which is something like a personal succession plan, is important in helping the business leader make a successful transition. "It's so much easier to let go of something when you have a new direction in which to move," psychiatrist Barrie Greiff explained in Industrial Distribution.

Although management succession planning can be problematic and even painful, it is vital to ensuring the continuity—and perhaps even the continued existence—of businesses following the departure of the owner or CEO. Many business leaders are reluctant to plan for what will happen when they are no longer with the company, usually because they find it unpleasant to confront their retirement or mortality. It may be helpful to consider succession planning as an extension of employee development programs. "Succession planning," William T. Marshall wrote in America's Community Banker, "should reach deeply into an institution's management ranks to prepare managers at all levels for career advancement, perhaps to the very top."