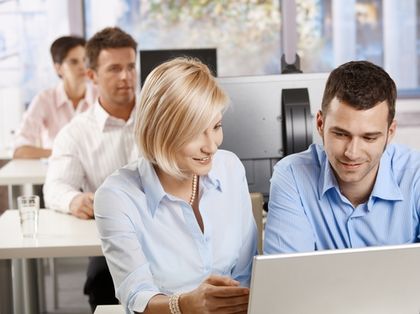 On-the-job training is the oldest form of training. Prior to the advent of off-site training classrooms, the only practical way of learning a job was working along side an experienced worker in a particular trade or profession—as evinced by the practice of apprenticeship during the Middle Ages when master craftsmen passed on skills and knowledge to novices who worked along side them.

On-the-job training programs range from formal training with company supervisors to learning by watching. In this sense, the most formal types of on-the-job training are distinct from classroom training largely in that they take place within the firm. In the face of increased international competition and the more widespread use of computers in production processes, the implementation of more formal and sophisticated kinds of on-the-job training has become a critical issue for firms in the United States.

Two different types of on-the-job training are frequently distinguished in the professional literature: structured (planned) and unstructured (unplanned). Unstructured is the most common kind and refers to loose on-the-job training programs that largely involve a novice employee working with an experienced employee, who serves as a guide or mentor in an observe-and-imitate training process. The new workers largely learn by trial and error with feedback and suggestions from experienced workers or supervisors. Unstructured training is designed based on work requirements (e.g. manufacturing products), not on imparting job skilled needed by new workers (e.g. the specific skills needed to manufacture products). Consequently, unstructured on-the-job training often fails to impart needed skills fully or consistently, because experienced employees sometimes are unable to articulate clearly the proper methods for performing a job and they sometimes use different training methods each time train new workers.

One of the first structured on-the-job training programs was launched during World War I in the shipbuilding industry by Charles "Skipper" R. Allen, who based the program on the ideas of the psychologist Johann Friedrich Herbart. Allen sought to make training more efficient by having trainees undergo four steps:

The seven-step approach to on-the-job training became known as "job instruction training" and studies indicated that this approach led to increased productivity during World War II.

Contemporary approaches to on-the-job training emphasize the training of novice workers by experienced workers who possess not only the skills necessary for the tasks to be learned but also the skills as a trainer. By selecting such trainers, companies can achieve consistency in training content, methods, and results. In addition, structured on-the-job training is viewed as a process that includes training inputs (novice employees, experienced employees, and tasks to be learned), a training program, and training outputs (job performance and novice employee development).

Federal legislation has played a large role in the provision of on-the-job training. Title I of the Comprehensive Employment and Training Act of 1973 (CETA) provides for on-the-job training and "work experience" for disadvantaged workers. This includes the establishment of subsidized government jobs in an effort to encourage regular work habits and develop job skills for those with little or no previous experience in the labor market.

Unlike CETA, programs under JTPA are intended to train and place workers in the private sector. This is in response to the political unpopularity of subsidized government jobs developed under CETA. JTPA programs also contrast with CETA programs in that they are largely regulated at the state level, give private sector representatives a large administrative role, and focus more on job training than income maintenance.

The General Accounting Office (GAO) conducted a nation-wide survey of Title III JTPA programs between 1982 and 1985. The survey indicated that 80 percent of program participants received job search assistance, compared with only 26 percent who received classroom training and 16 percent who received on-the-job training. The low proportion of participants actually receiving training resulted from the fact that trainers were largely funded on the basis of job placement, not long-term labor market preparedness or earnings improvement. Based on the General Accounting Office survey and an additional year of study, the U.S. Department of Labor recommended greater emphasis on job training to meet the needs of specific employers and particularly on on-the-job rather than classroom training.

The Department of Labor's recommendations were realized with the passage of the Economic Dislocation and Worker Adjustment Assistance Act of 1988. The act greatly increased funding for job training programs under JTPA, even though the level of spending was only one-tenth of that under CETA in its peak year. The effectiveness of on-the-job training was examined for four JTPA programs in the late 1980s. Contrary to the emphasis of the new legislation (and in contrast with more comprehensive studies of CETA programs), on-the-job training was not found to significantly improve employment rates or earnings of trainees.

Japanese production and management techniques had a large influence in the American workplace in the 1980s and 1990s. One element of this was the increased use of statistical control techniques and quality circles, which required more sophisticated on-the-job training for production workers. Firms such as the Victor Products Division of the Dana Corporation, the First Chicago Corporation, Nestle Foods Corp., and Motorola, Inc. provided basic training to lowskilled and unskilled workers in computers and statistical process controls. In addition, these firms provided on-the-job training in basic skills, including reading and math. An increasing number of firms came to provide such training in basic skills in response to dramatic changes in production techniques, for which such skills were essential.

In spite of the Japanese influence, however, U.S. firms continue to rely less on on-the-job training and more on formal education for management training than do Japanese firms. Masters in Business Administration (MBA) degrees provide an important credential for managers in the U.S., whereas only one Japanese university offers a degree similar to an MBA Japanese managers often begin their careers by doing production work and are trained by being rotated through a broad range of a firm's operations until they become top-level managers.

The German system of job training is also an influential model in job-training policy debates in the United States The German system relies heavily on on-the-job training, but in a more formal manner than in the U.S. or Japan. About 80 percent of Germans have completed vocational education programs, which prepares them for one of 400 occupations. The system supports approximately 1.5 million apprentices at a time, with an estimated $8,400 (U.S. dollars) spent per year for each apprentice. Though vocational education is overseen by a federal government agency, training takes place largely within firms. These firms take responsibility for the daily supervision of trainees and for the administration of certification exams.

Unlike the Japanese system, trainees in Germany generally do not become employees at the firms in which they received their training. That is, trainees are prepared for the job market at large, not the so-called internal labor market within the firm as in the Japanese system. This difference is a reflection of the lifetime employment system in Japan, in which firms benefit directly from investments made in entry-level on-the-job training. Germany and Japan both have lower employee turnover rates than in the United States, however. In this sense, U.S. firrns run a higher risk in investing in ongoing on-the-job training for their workers, in that they are less able to secure returns from that training.

During the 1980s and 1990s, there was a rapid expansion in the number of joint union-management training programs in the United States These programs were most extensive in the automotive, communications, steel, and construction industries, as well as in the public sector. Joint programs offer general worker education as well as on-the-job training, including apprenticeships, certifications, and licensing. The growth of joint training programs is a reflection of the greater emphasis that firms placed on training after the 1970s. This was based on the rapid pace of technical change that often required new forms of work organization, such as flexible and just-in-time production. In these forms of production, workers generally are required to perform a greater number of tasks than with traditional mass production techniques.

Joint on-the-job training programs have also been established between labor unions and institutions of higher education in the form of joint apprenticeship training. The pioneering programs were established under a grant by the U.S. Department of Labor to the International Union of Operating Engineers in 1972. These programs typically give college credits to apprentices engaged in on-the-job training, and these apprentices enroll in college courses for related education. Courses are taken mainly in two-year colleges but also in university labor education centers. An increasing number of these programs emphasize background education in labor studies in addition to the more technical aspects of the apprenticeship.

"On Being an Employee-Oriented Company," Industry Week, I November 1993.