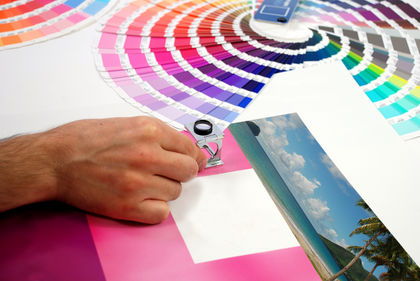 The interest of U.S. manufacturers in quality circles (or quality control circles) was sparked by the dramatic improvements in the quality and economic competitiveness of Japanese goods in the post-World War II years. In their volume Japanese Quality Circles and Productivity, Ross and Ross defined a quality circle as follows: "A quality circle is a small group of employees doing similar or related work who meet regularly to identify, analyze, and solve product-quality and production problems and to improve general operations. The circle is a relatively autonomous unit (ideally about ten workers), usually led by a supervisor or a senior worker and organized as a work unit."

Under ideal circumstances these voluntary groups of problem solvers focus on measurable indicators of quality that impact the company's costs, productivity, or other business interests. Such indicators are usually industry- or process-specific. So, for example, quality circles at a manufacturing company might focus on finding ways to minimize product defects, as measured in the amount of product with a particular defect per thousand or million; meanwhile, those at an insurance company might seek methods to reduce the frequency of billing errors.

Quality circles are generally associated with Japanese management and manufacturing techniques. The introduction of quality circles in Japan in the postwar years was inspired by the lectures of W. Edwards Deming (1900-1993), a statistician for the U.S. government. The newly formed Union of Japanese Scientists and Engineers was familiar with Deming's work and heard that he would be coming to Japan in 1950 to advise the Allied occupation government. Accepting JUSE's invitation, Deming addressed Japanese industry's top 50 executives.

Deming based his proposals on the experience of U.S. firms operating under wartime industrial standards during World War II. Noting that American management had typically given line managers and engineers about 85 percent of responsibility for quality control and only about 15 percent to production workers, Deming argued that these shares should be reversed. Production processes should be redesigned to more fully account for quality control, and all employees in a firm from top down should understand statistical control technologies and undergo continuous education on quality control. Quality circles were the means by which this continuous education was to take place for production workers.

Were Japanese firms to adopt the system of quality controls he advocated, Deming predicted that nations around the world would be imposing import quotas on Japanese products within five years. His prediction was vindicated. Deming's ideas became very influential in Japan, and in 1951, JUSE established the annual corporate and individual Deming awards for achievements in quality improvement. Deming was also awarded the Second Order Medal of the Sacred Treasure from Emperor Hirohito for his contributions to the Japanese economy. A 1954 lecture series in Japan by American quality control expert Dr. J.M. Juran gave further impetus to the development of quality control circles.

The principles of quality circles emphasized the importance of preventing defects from occurring rather than relying on product inspection following a production process. Quality circles also attempted to minimize the scrap and downtime that resulted from part and product defects. Deming's idea that improving quality could increase productivity led to the development in Japan of the Total Quality Control (TQC) concept, in which quality and productivity are viewed as two sides of a coin. TQC also required that a manufacturer's suppliers make use of quality circles.

Quality circles often rely on visual representations such as scatter diagrams, flow charts, and cause-and-effect diagrams. In one common format, various aspects of the production process were categorized by materials, manpower, methods, and machines. The reliance on statistical representations of the production process and statistical production controls was another of Deming's legacies in Japan.

Quality circles in Japan were part of a system of relatively cooperative labor-management relations, involving company unions and lifetime employment guarantees for many full-time permanent employees. Consistent with this decentralized, enterprise-oriented system, quality circles provided a means by which production workers were encouraged to participate in company matters and by which management could benefit from production workers' intimate knowledge of the production process.

Active U.S. interest in Japanese quality control began in the early 1970s, when U.S. aerospace manufacturer Lockheed organized a tour of Japanese industrial plants. This trip marked a turning point in the previously established pattern, in which Japanese managers had made educational tours of industrial plants in the United States. Lockheed's visit resulted in the gradual establishment of quality circles in its factories beginning in 1974. Within two years, Lockheed estimated that its 15 quality circles had saved nearly $3 million, with a ratio of savings to cost of six to one.

As Lockheed's successes became known, other firms in the aerospace industry began adopting quality circles, including Hughes Aircraft, Northrop, Sperry Vickers, Martin Marietta, and Westinghouse. Thereafter quality circles spread rapidly throughout the U.S. economy; by 1980, over one-half of firms in the Fortune 500 had implemented or were planning on implementing quality circles. By the early 1980s, General Motors Corp. had established about 100 quality circles among its Buick, Oldsmobile, Cadillac, Chevrolet, and Fisher Body divisions.

In the early 1990s, however, the U.S. National Labor Relations Board (NLRB) made important rulings regarding the legality of certain forms of quality circles. These rulings were based on the 1935 Wagner Act's prohibition of company unions and management-dominated labor organizations.

In December of 1992, the NLRB ruled that Electromation Inc. of Elkhart, Indiana, was operating unlawful quality circles and employee-involvement programs, referred to as "action committees" by the firm. These programs were found unlawful in that they were established by the firm, that their agendas were dominated by the firm, and that they addressed the conditions of employment within the firm. The NLRB stated that its ruling was not a general indictment against quality circles and labor-management cooperation programs, but was aimed specifically at the practices of Electromation. Electromation had been a nonunion firm, but was unionized by the Teamsters shortly after the "action committees" were eliminated.

The NLRB made a similar ruling against E.I. Du Pont de Nemours & Co., a unionized firm, in June of 1993. The NLRB ruled that Du Pont's seven labor-management committees in its Deepwater, New Jersey, plant were in effect labor organizations that were used to bypass negotiations with the plant's union, the Chemical Workers Association. The NLRB stated once again that its ruling was limited to the facts in the case at hand. Nonetheless, a number of employer representatives expressed their concern that the ruling would hinder the development of labor-management cooperation programs of all kinds.

The chilling effect from the NLRB rulings made many human resources departments wary of initiating new quality circle programs for fear of legal repercussions. This climate coincided what appeared to be a general waning of interest in quality circles among U.S. companies since the 1980s. By the mid-1990s the topic all but disappeared from discussions in the mainstream business press, and even academic journals gradually lost interest in quality circles.

Indeed, two Columbia Business School researchers, Eric Abrahamson and Gregory Fairchild, published a study characterizing quality circles in the United States as little more than a management fad. Abrahamson and Fairchild's work, based in large part on an analysis of periodical articles on the subject published over a 19-year span, suggested that the short-lived popularity of quality circles vias a product of U.S. corporations' knee-jerk decisions in reaction to a perceived competitive disadvantage versus Japanese firms. The U.S. companies grasped, the professors argued, for easy ways to emulate the practices of their Japanese competitors, and the notion of quality circles appeared to many at the time to be one such way.

Despite quality circles' decline in popularity in the United States, the practice continues to enjoy support in Japanese firms.

Journal for Quality and Participation, bimonthly.