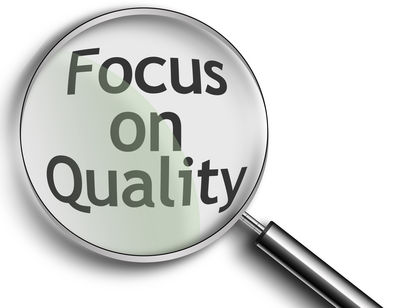 Total quality management (TQM) refers to management methods used to enhance quality and productivity in organizations, particularly businesses. TQM is a comprehensive system approach that works horizontally across an organization, involving all departments and employees and extending backward and forward to include both suppliers and clients/customers.

TQM is only one of many acronyms used to label management systems that focus on quality. Other acronyms that have been used to describe similar quality management philosophies and programs include CQI (continuous quality improvement), SQC (statistical quality control), QFD (quality function deployment), QIDW (quality in daily work), and TQC (total quality control). Despite the ambiguity of the popularized term "TQM," that acronym is less important than the substance of the management ideology that underlies it. TQM provides a framework for implementing effective quality and productivity initiatives that can increase the profitability and competitiveness of organizations.

Although TQM techniques were adopted prior to World War II by a number of organizations, the creation of the total quality management philosophy is generally attributed to Dr. W. Edwards Deming (1900-1993). In the late 1920s, while working as a summer employee at Western Electric Company in Chicago, he found worker motivation systems to be degrading and economically unproductive; incentives were tied directly to quantity of output, and inefficient postproduction inspection systems were used to find flawed goods.

Deming teamed up in the 1930s with Walter A. Shewhart (1891-1967), a Bell Telephone Company statistician whose work convinced Deming that statistical control techniques could be used to supplant traditional management methods. Using Shewhart's theories, Deming devised a statistically controlled management process that provided managers with a means of determining when to intervene in an industrial process and when to leave it alone. Deming got a chance to put Shewhart's statistical quality-control techniques, as well as his own management philosophies, to the test during World War II. Government managers found that his techniques could easily be taught to engineers and workers, and then quickly implemented in overburdened war production plants.

One of Deming's clients, the U.S. State Department, sent him to Japan in 1947 as part of a national effort to revitalize the war-devastated Japanese economy. It was in Japan that Deming found an enthusiastic reception for his management ideas. Deming introduced his statistical process control, or statistical quality control, programs into Japan's ailing manufacturing sector. Those techniques are credited with instilling a dedication to quality and productivity in the Japanese industrial and service sectors that allowed the country to become a dominant force in the global economy by the 1980s.

While Japan's industrial sector embarked on a quality initiative during the middle 1900s, most American companies continued to produce mass quantities of goods using traditional management techniques. America prospered as war-ravaged European countries looked to the United States for manufactured goods. In addition, a domestic population boom resulted in surging U.S. markets. But by the 1970s some American industries had come to be regarded as inferior to their Asian and European competitors. As a result of increasing economic globalization during the 1980s, made possible in part by advanced information technologies, the U.S. manufacturing sector fell prey to more competitive producers, particularly in Japan.

In response to massive market share gains achieved by Japanese companies during the late 1970s and 1980s, U.S. producers scrambled to adopt quality and productivity techniques that might restore their competitiveness. Indeed, Deming's philosophies and systems were finally recognized in the United States, and Deming himself became a highly sought-after lecturer and author. The "Deming Management Method" became the model for many American corporations eager to improve. And total quality management, the phrase applied to quality initiatives proffered by Deming and other management gurus, became a staple of American enterprise by the late 1980s. By the early 1990s, the U.S. manufacturing sector had achieved marked gains in quality and productivity. By the late 1990s several American industries had surpassed their Japanese rivals in these areas.

Specifics related to the framework and implementation of TQM vary between different management professionals and TQM program facilitators, and the passage of time has inevitably brought changes in TQM emphases and language. But all TQM philosophies share common threads that emphasize quality, teamwork, and proactive philosophies of management and process improvement. As Howard Weiss and Mark Gershon observed in Production and Operations Management, "the terms quality management, quality control, and quality assurance often are used interchangeably. Regardless of the term used within any business, this function is directly responsible for the continual evaluation of the effectiveness of the total quality system." The authors went on to delineate the basic elements of total quality management as expounded by the American Society for Quality Control: (1) policy, planning, and administration; (2) product design and design change control; (3) control of purchased material; (4) production quality control; (5) user contact and field performance; (6) corrective action; and (7) employee selection, training, and motivation.

For his part, Deming pointed to all of these factors as cornerstones of his total quality philosophies in his book Out of the Crisis. He contended that companies needed to create an overarching business environment that emphasized improvement of products and services over short-term financial goals. He argued that if such a philosophy was adhered to, various aspects of business—ranging from training to system improvement to manager-worker relationships—would become far more healthy and, ultimately, profitable. But while Deming was contemptuous of companies that based their business decisions on statistics that emphasized quantity over quality, he firmly believed that a well-conceived system of statistical process control could be an invaluable TQM tool. Only through the use of statistics, Deming argued, can managers know exactly what their problems are, learn how to fix them, and gauge the company's progress in achieving quality and organizational objectives.

Joseph Jablonski, author of Implementing TQM, identified three characteristics necessary for TQM to succeed within an organization: participative management; continuous process improvement; and the utilization of teams. Participative management refers to the intimate involvement of all members of a company in the management process, thus deemphasizing traditional top-down management methods. In other words, managers set policies and make key decisions only with the input and guidance of the subordinates who will have to implement and adhere to the directives. This technique improves upper management's grasp of operations and, more importantly, is an important motivator for workers who begin to feel as if they have control and ownership of the process in which they participate.

Continuous process improvement, the second characteristic, entails the recognition of small, incremental gains toward the goal of total quality. Large gains are accomplished by small, sustainable improvements over a long term. This concept necessitates a long-term approach by managers and the willingness to invest in the present for benefits that manifest themselves in the future. A corollary of continuous improvement is that workers and management develop an appreciation for, and confidence in, TQM over time.

Teamwork, the third necessary ingredient for the success of TQM, involves the organization of cross-functional teams within the company. This multidisciplinary team approach helps workers to share knowledge, identify problems and opportunities, derive a comprehensive understanding of their role in the overall process, and align their work goals with those of the organization.

In addition to identifying three characteristics that need to be present in an organization and six attributes of successful TQM programs, Jablonski offers a five-phase guideline for implementing total quality management: preparation, planning, assessment, implementation, and diversification. Each phase is designed to be executed as part of a long-term goal of continually increasing quality and productivity. Jablonski's approach is one of many that has been applied to achieve TQM, but contains the key elements commonly associated with other popular total quality systems.

During preparation, management decides whether or not to pursue a TQM program. They undergo initial training, identify needs for outside consultants, develop a specific vision and goals, draft a corporate policy, commit the necessary resources, and communicate the goals throughout the organization.

In the planning stage, a detailed plan of implementation is drafted (including budget and schedule), the infrastructure that will support the program is established, and the resources necessary to begin the plan are earmarked and secured.

This stage emphasizes a thorough self-assessment—with input from customers/clients—of the qualities and characteristics of individuals in the company, as well as the company as a whole.

At this point, the organization can already begin to determine its return on its investment in TQM. It is during this phase that support personnel are chosen and trained, and managers and the workforce are trained. Training entails raising workers' awareness of exactly what TQM involves and how it can help them and the company. It also explains each worker's role in the program and explains what is expected of all the workers.

In this stage, managers utilize their TQM experiences and successes to bring groups outside the organization (suppliers, distributors, and other companies that have an impact on the business's overall health) into the quality process. Diversification activities include training, rewarding, supporting, and partnering with groups that are embraced by the organization's TQM initiatives.

TQM INTO THE FUTURE

Total quality management—first popularized in the 1950s in Japan—swept through American businesses in the 1980s and resulted in significant improvements in quality, productivity, customer satisfaction, and competitiveness in many companies by the 1990s. The basic principles of TQM are intended to achieve continuous organizational improvement through the participation and commitment of workers throughout a company. TQM focuses all the resources of an organization upon meeting the needs of customers (both internal and external), using statistical tools and techniques to measure results and aid decision making.

Despite the impressive results many companies have achieved through TQM, its future popularity is still in doubt. By the late 1990s some experts began to question whether TQM was a fad that would soon be superseded by yet another management technique. At the same time, however, other experts sought to apply TQM to emerging business problems, such as making computer systems compliant in the year 2000. It appears as if the underlying principles of TQM may find continued applications in business, even if they are eventually incorporated into a new movement for management innovation and organizational change.