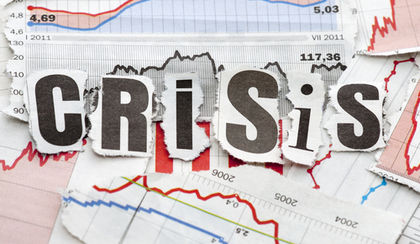 A recession is a downturn in the business cycle that occurs when the real gross national product (GNP)—the total output of goods and services produced by the U.S. population—declines for two consecutive quarters, or six months. Recessions are usually characterized by a general decrease in output, income, employment, and trade lasting from six months to a year. A more severe and long-lasting economic crisis is known as a depression.

Virtually all advanced world economies that are not controlled centrally have experienced recurring cycles of slump and recovery in business activity since the Industrial Revolution. The United States suffered through four severe depressions in the 1800s, as well as the Great Depression in the 1930s. These crises cost a great deal in terms of national wealth and personal hardship. Since then, however, sophisticated analysis of economic trends has combined with increased government intervention to prevent such extreme fluctuations in economic activity. In fact, no depressions have occurred in industrialized nations since World War II, although many recessions have occurred. Governments monitor the business cycle closely and take various steps to stabilize the economy before it reaches extreme peaks and troughs. Formerly, the typical stages in the business cycle were depression, recovery, prosperity, and recession. Today, the phases are usually defined using the more moderate terms upswing, peak, recession, and trough.

Prior to entering the recession phase of the business cycle, the economy reaches the peak of its expansion. When it nears the full-employment level of output, its rate of growth begins to slow. Prices are generally rising, so consumers demand fewer products and services. As a result, companies begin to hire fewer new workers, and demand falls even further with the reduction in incomes. Productivity and output begin to decline as costs increase, and companies respond by decreasing investment. Gradually, the overall economy contracts, as the decrease in investment reduces production and employment. Eventually, government intervention and the natural progression of the business cycle cause the recession to end, or reach a trough or turning point, and the upswing stage begins.

Though the general pattern of the business cycle is understood, in reality the situation is not usually so clearly defined. The economy progresses through the stages very gradually, and not all regions, sectors, or businesses are affected in the same way at the same time. In addition, there are many other patterns of economic activity that interact with and complicate the business cycle. For example, economists often observe seasonal variations in output and sales in some sectors of the economy. Retail sales tend to pick up around Christmas, while construction tends to increase during the summer months. Economists also describe independent cycles of investment in certain industries, such as shipbuilding or agriculture. Finally, the overall level of economic activity tends to expand every year. These factors combine to make recessions difficult to predict or define.

Over the years, a number of changes have taken place or been instituted by the government to stabilize fluctuations in economic activity, and thus reduce the incidence and severity of recessions. For example, the growth of the service sector, with its relatively stable demand and its tendency to employ salaried personnel, has been a stabilizing influence. The corporate trend toward stable dividend policies has also helped, as has increased federal regulation of the stock market and the banking industry. Some experts claim that instituting a progressive income tax and an unemployment insurance program have also worked to moderate fluctuations in the business cycle. Finally, the government often intervenes directly with monetary or fiscal controls to prevent inflation, and with job training programs and public welfare to reduce the negative effects of unemployment.

Despite such measures, however, recessions still occur in the United States and worldwide. During the U.S. recession that lasted from July 1990 through March 1991, the economy showed the lowest growth rate since the Great Depression. U.S. News and World Report called the recession "unlike any the country has experienced in the post-World War II era, the result of years of profligacy and irresponsible government policies," and claimed it was responsible for the loss of 1.9 million jobs through early 1992. In fact, some analysts stated that this recession could have been as bad as the Great Depression if not for increased government spending—which represented 25 percent of GNP in 1991 as opposed to 3 percent in 1930—and federal deposit insurance for banks.

Still, economists disagreed on what caused the recession and the slow recovery, how long the recession officially lasted, and how a similar situation could best be prevented in the future. Some experts attributed the prolonged recession to industrial overcapacity, which led to falling asset values for many businesses. Others claimed that an overall decrease in consumption was responsible, whether in response to an increase in oil prices following the Persian Gulf War or because of a slowdown in the rate of population growth. Some analysts blamed technology, stating that the proliferation of electronically controlled credit cards led consumers to build up personal debt. Whatever the reasons for the recession, however, it seemed that businesses needed to be prepared for more downturns in the future.

A GLOBAL RECESSION IN OUR FUTURE?

The American economy showed remarkable growth during the mid-to-late 1990s, aided by low unemployment, low inflation, high business investment spending, and a government budget surplus. In addition, spending by American consumers grew at a healthy rate of 6 percent for first six months of 1998. Still, the economic crisis that began in Asia soon spread to Russia and Latin America, causing turmoil in the U.S. stock market during the second half of the year. Analysts began to debate whether this situation would lead to reductions in consumer spending and result in another recession.

Thanks to the strong probability that the U.S. government would cut interest rates and taxes, or increase public spending, in order to boost the economy, the Economist predicted a slowdown rather than a recession for 1999. "For the U.S. economy to go into a significant recession, never mind a depression," former Federal Reserve vice-chairman Alan Blinder stated, "important decision-makers would have to take leave of their senses." But other experts—pointing to the crash in stock and bond markets outside the United States and western Europe, shockingly low prices on commodities such as oil, an overvalued U.S. stock market, and high levels of individual and corporate debt—placed the likelihood that the American economy would enter a recession in 1999 at 50 to 80 percent.

During recession period can marketers offer consumers interest-free credit terms, and can recession also increase the cost of producing the product?.