The number of companies that manufactured products in this category (not necessarily as their primary product) totaled less than 1,000 in the early 2000s. The value of shipments from those corporations increased from $1.1 billion in 1977, to $3.2 billion in 1992, but decreased to $2.8 billion in 2001. The states producing the most products in this industry were Georgia, Kentucky, South Carolina, California, Tennessee, Texas, and North Carolina.

According to the most recent figures available from the U.S. Census Bureau, there are 865 establishments fabricating textile products in this category. Annually, they spend nearly two billion dollars on materials and pay more than $85 million for capital expenditures on new and used buildings and other structures, machinery, and equipment. The value of shipments for these companies fluctuated throughout the late 1990s and early 2000s, declining from $3.26 billion in 1997 to $2.83 billion in 1998; increasing to $3.17 billion in 1999; declining to $3.15 billion in 2000; and declining further to $2.8 billion in 2001.

Takata Inc. was one of the largest companies whose primary business fell within this category. This manufacturer of automobile seat belts had 29,000 employees and sales of $2.6 billion in 2002. After expanding into Korea, India, Germany, Malaysia, and China in the early 2000s, the firm established Takata Asia Pte. Ltd. to serve as a regional headquarters for its Asian operations. Other industry leaders included TechnoTrim Inc. (a subsidiary of Johnson Controls Inc. based in Livonia, Michigan) with estimated sales of $72 million.

In 1994 the United States, Mexico, and Canada implemented the North American Free Trade Agreement (NAFTA), a pact that gradually removed all tariffs and other trade restrictions from most goods made and sold in North America. As a result, U.S. textile exports to Mexico jumped from $1.1 billion to more than $3 billion between 1995 and 2002. However, between 1997 and 2002, cotton textiles and apparel imports from China, which reached $9.8 billion in 2002, had increased 17 percent. Imports were expected to increase throughout the early 2000s, particularly as the Uruguay Round agreement—passed in the late 1990s by the World Trade 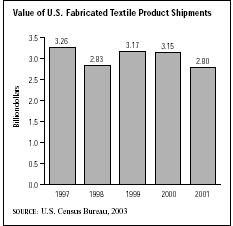 Organization—mandated the elimination of textile quotas by 2005.