Most companies whose primary business is Schiffli embroidery are relatively small and privately owned. Schiffli lace is produced by a machine with several hundred needles placed horizontally one above the other. With fabric held in a frame covering the full width of the machine, the needles move back and forth through the material. The yarn used to embroider the fabric is supplied from individual spools.

Schiffli lace is a type of embroidery that once was made by hand with needles that were pointed at both ends. The lasting popularity of handmade lace led to the invention of lace-making equipment such as Schiffli machines. Many types of lace are machine made, frequently with geometrically shaped netting used as backgrounds. Although previously made only from cotton, Schiffli lace, like other laces, can be manufactured from man-made fibers.

More than 200 companies operated in this industry in the early 2000s, compared to 357 Schiffli machine embroidery companies, with a total of 6,000 employees, in 1977. New Jersey and California had the largest number of companies in this industry. Capital expenditures were roughly six million dollars, with nearly one million dollars going for buildings and other structures while roughly five million dollars went for machinery and equipment. The total cost of materials was $155 million in 2000. The value of shipments in this category was $271.5 million in 2001, up from $179.9 million in 1997, but still less than the $320 million worth of good shipped in 1995. 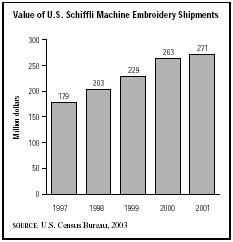 Following an almost continuous decline since 1988, employment in all of the fabricated textile industries increased in the mid-1990s. However, the U.S. Department of Labor in 2001 predicted a general decline in employment for all textile machinery operators through the year 2006. Such a decline would be caused primarily by the introduction of new machines and more efficient operating practices (which would reduce the number of workers needed at textile factories), along with more relaxed international trade agreements (which could place U.S. companies and workers in greater competition with imported textiles). Total Schiffli machine embroidery industry employment fell from 3,849 in 1997 to 1,873 in 2000. Payroll costs over this time period declined from $76.6 million to $49.5 million. The industry's 1,617 production workers earned $35 million in 2000. Their average hourly wage was $9.46.

In 1994 the United States, Mexico, and Canada implemented the North American Free Trade Agreement (NAFTA), which removed tariffs and other trade restrictions from most goods made and sold in North America. As a result, U.S. textile exports to Mexico jumped from $1.1 billion to more than $3 billion between 1995 and 2002. However, between 1997 and 2002, cotton textiles and apparel imports from China, which reached $9.8 billion in 2002, had increased 17 percent. Imports were only expected to increase throughout the early 2000s, particularly as the Uruguay Round agreement, which was passed in the late 1990s by the World Trade Organization, called for the elimination of textile quotas by 2005.

During the late 1990s manufacturers invested in high-technology machinery such as computerized embroidery machines. As the textile industry continues to become increasingly automated throughout the early 2000s, operators and setters will need to understand complex machinery and have sufficient computer skills.