SIC 2395
PLEATING, DECORATIVE AND NOVELTY STITCHING, AND TUCKING FOR THE TRADE

In the early 2000s, most of the companies in this category were private corporations with 100 or fewer workers. Workers at these establishments produced art needlework, quilted fabrics or cloth, Swiss loom embroideries, machine-made crochet ware, and sequined embroideries. Also made by companies in this industry are various products for the trade, including appliqueing, buttonhole making, eyelet making, hemstitching, looping, permanent pleating and pressing, pleating, ruffling, and scalloping. 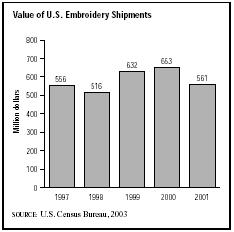 During the 1980s, 200 companies dropped from this industry. However, the industry rebounded in the late 1990s to more than 805 establishments from a low of 685 in 1988. According to the latest figures published by the U.S. Census Bureau, more than 15,000 employees are engaged in pleating and stitching. The 11,500 production workers in this segment earn an average hourly wage of $8.90. The cost of materials is roughly $400 million, and capital expenditures are $45 million. Companies continued to spend money to upgrade their buildings and machinery to meet the increased demand for their products.

Morning Sun Inc. of Tacoma, Washington, was one of the largest firms that did pleating and decorative and novelty stitching as its primary business. Like many companies that competed in this segment, Morning Sun was engaged in fabric screen printing and embroidering. Morning Sun had 375 employees and sales of roughly $50 million in the early 2000s.

The primary product of nearly 250 establishments is embroidery (excluding Schiffli machine embroidery). These companies employ 7,300 people, including 5,700 production workers who earned an average hourly wage of $8.50. They shipped $561 million worth of goods in 2001, down from $653.9 million in 2000.