This category includes companies that manufacture automotive trimmings, apparel findings, and related products, and those that specialize in printing and stamping on garments and apparel accessories, including silk screen printing. Corporations classified in this industry make trimmings, bindings, and linings for items such as hats, suits, coats, neckties, purses, and luggage. They also make shoulder pads, shoulder straps, waistbands, ribbons, bows, sweatbands and visors for caps, and other components to be used by the textile industry.

The value of shipments in the various product classes in 2001 were as follows: automotive trimmings, $4.3 billion; printing on garments and apparel accessories (including silk screen printing) and stamped art goods, $2.5 billion; other apparel accessories, not specified by kind, $538.1 million; and other trimmings and findings, $197.5 million. The value of shipments of all of the above products classes totaled roughly $7.5 billion in 2001.

According to the latest figures available from the U.S. Census Bureau, more than 600 establishments manufactured automotive and apparel trimmings in the early 2000s. They employed more than 12,000 workers, shipped more than seven billion dollars worth of goods, spent more than $500 million on materials, and invested roughly $50 million in capital expenditures. The largest concentrations of firms engaged in apparel findings and trimmings, except men's and junior boys' coat, suit, and 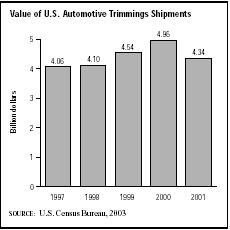 trouser findings in this segment were in New York, California, New Jersey, Massachusetts, Maryland, and Pennsylvania.

Companies in this industry operated plants outside the United States to better supply their customers. For example, Findlay Industries announced in 1997 that it would open a facility in Poland to supply nearby factories owned by General Motors Corp., one of its most important customers. In 2004, Findlay operated 24 manufacturing plants in North America and Europe. Likewise, QST Industries had been operating a manufacturing plant in Hong Kong since the 1980s to supply pockets, interlinings, and other components to overseas textile plants. The company opened a new plant in Mexico in 1999 and a third plant in the Dominican Republic within another year. International efforts in the early 2000s focused on emerging markets in Asia. QST also had warehouses and sales facilities in 32 countries as of 2004.