SIC 5499
ALL OTHER SPECIALTY FOOD STORES

This industry covers establishments primarily engaged in the retail sale of specialized foods not elsewhere classified, such as eggs, poultry, health foods, spices, herbs, coffee, and tea. The poultry stores may sell live poultry, slaughter and clean poultry for their own account, and sell dressed fowls, or sell fowls cleaned and dressed by others.

Industry leader Herbalife International Inc. of Los Angeles, which generated 1998 sales of more than $1.6 billion, foundered in the late 1990s amidst plummeting stock prices and persistent allegations of foul play. From 1985 FDA findings of unsafe ingredients in the company's diet shakes and the California Attorney General's litigation for pyramid scheme practices, to a 1999 privatization bid that left investors in the lurch, Herbalife's growth, not surprisingly, slowed considerably.

The two biggest natural foods markets, Whole Foods Market Inc. of Austin, Texas and Wild Oats Markets Inc. of Boulder, Colorado, both launched World Wide Web sites in 1999 to extend their in-store sales. Whole Foods, which placed second in the industry with sales of almost $1.6 billion for its fiscal year ended September 30, 1999, limited its budget for promoting this Web site to $3.8 million, relying mostly on in-store ads and incentives to employees for encouraging customers to register with the site. Wild Oats, which placed fifth in the industry with sales of almost $399 million for its fiscal year ended January 2, 1999, hosted a Web site featuring real-time inventory and automatic updates to accounting ledgers. 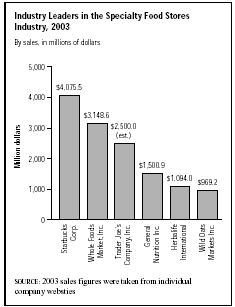 In the late 1990s, the fastest-growing sector of this industry was coffee stores, which typically sell coffee beans, ground coffees, and cups of brewed coffee ready to drink. Coffee stores represented the second largest segment of the industry behind health food and vitamin stores, which accounted for more than half of the estimated 7,900 establishments operating within this industry in 1996. Marianne Wilson observed in Chain Store Age that the tremendous surge in self-care positively impacted the health food and vitamin industry throughout the 1990s. Also represented in large numbers were gourmet food stores and water stores. Together, these stores reported sales of an estimated $3 billion in 1996, averaging about a 4 percent annual rise in sales since 1992.

The gourmet food retail section of this industry was also profitable throughout the 1990s. These food stores are known for their more expensive lines of foods and specialty items not typically sold at regular food stores. Despite higher prices, these businesses performed well during the economic recession of the late 1980s and early 1990s. According to Progressive Grocer, these stores weathered the recession because their clientele were not bargain shoppers in the first place, and because, in general, people were going out less and entertaining more at home.