According to D & B Sales & Marketing Solutions, there were 30,494 retail bakeries in 2003. Retail sales were approximately $6.2 billion. The bakery industry employed about 209,922 people, and the average number of employees per bakery totaled about seven workers. The bakery industry continued to experience growth in the 2000s according to a report released by the U.S. Food Marketing System. Specialized food stores, which include retail bakeries, expanded with the "growing popularity of cookie shops and bagelries." In fact, bakeries are considered the largest segment within the specialized food stores category. 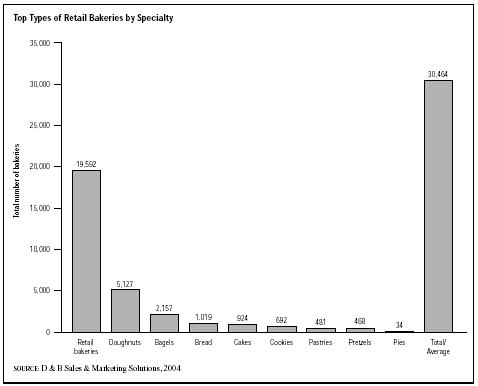 Unlike other segments of the retail grocery industry that experienced steady loss of market share to competing supermarkets and superstores throughout the 1990s, the retail bakery industry experienced steady growth. According to Dun's Census of American Business, there were 30,530 retail bakeries in 1996 and 32,530 in 1997. Retail sales increased from $6.5 billion in 1995 to $6.9 billion in 1999, according to Ward's Business Directory of Private and Public Companies, 1999. This growth was attributed to new retailing strategies, new products, and consumers' increased demand for bakery goods. According to Peter Houstle, Vice President of the Retailer's Bakery Association, the ability to merge the independent baker with the supermarket was crucial to the industry's survival. In Bakery Production and Marketing, Carol Meres Kroskey wrote that a number of supermarkets opted to house bakeries of regional and national brands rather than expand in-house bakeries. Furthermore, products like the bagel experienced tremendous growth during the mid-1990s, adding significantly to the industry's overall growth.