Establishments in this industry are primarily engaged in the retail sale of new and used automotive vehicles, equipment, and supplies, not elsewhere classified, such as snowmobiles, go-karts, dune buggies, utility trailers, and golf carts. Also included in this industry are establishments primarily engaged in the retail sale of aircraft. Not included in this classification are automobiles, light trucks, recreational vehicles, motorcycles, boats, motor scooters, all-terrain vehicles, and personal watercraft.

In 2001, the U.S. Census Bureau reported 2,216 establishments engaged in the retail sale of new and used automotive vehicles, equipment, and supplies, not elsewhere classified. The total number of retailers climbed to 5,683 in 2003, with annual sales of approximately $4.8 billion, and there were 24,785 employees. The average establishment had sales of about $900,000. States with the highest number of stores within this industry were Texas with 536, California with 530, Florida with 499, New York with 258, and Michigan with 203. Together, they enjoyed more than 35 percent of the U.S. market.

Businesses within this industry sell a wide range of products at the retail level. Products as different as snowmobile helmets and single-piston aircraft are sold by retail establishments that vary greatly in size and scope of business.

Snowmobile retailers sell new and used snowmobiles, parts, and equipment and are involved in the servicing of the vehicles. Dealers contract to carry the product lines supplied by the four snowmobile manufacturers worldwide. Because business depends on snow, retailers are located in the states in which winters are marked by snow accumulation that stays on the ground long enough for a respectable snowmobiling season. Dealers also often carry other types of recreational vehicles, such as all-terrain vehicles and personal watercraft, to balance out the seasonal swings in business.

ISMA reported 114,927 snowmobiles purchased in the United States in 2003, with an additional 50,209 sold in Canada. The average retail price was about $6,380. In all, there were 2.7 million registered snowmobiles, 1.6 million in the U.S. alone. The total number of licensed snowmobile dealers were 1,560 in the United States, 1,060 in Canada, and 403 in Scandinavia. The leading manufacturers are Artic Cat, Bombardier Inc., Polaris Industries, and Yamaha Motor Corporation.

Most of the business in the aircraft sector of this category is done in the buying and selling of used aircraft and parts. An article in Business and Commercial Aircraft magazine suggested that used aircraft has historically outsold new aircraft at a margin of three to one. The 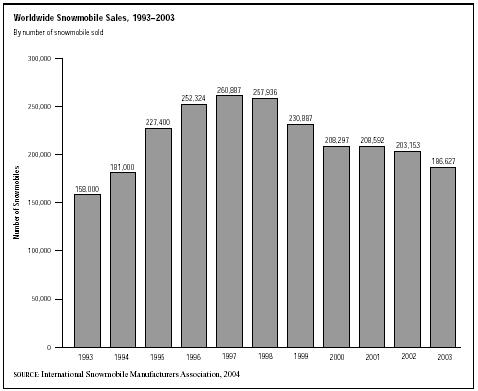 same article maintains that 95 percent of turbine equipment is sold to existing users of business aircraft. The National Aircraft Resale Association reported that 1,525 used jet and 1,312 turboprop sales transactions were completed in 1997. For 2000, the figures changed to 1,567 used jet and 1,358 turboprop sales, respectively. The figures were compiled by NARA's associate member, AMSTAT Corporation, a research organization that compiles statistics for the aviation business industry.

According to the Kart Marketing Group, Inc., publisher of Kart Marketing International magazine, gokarts generated approximately $500 million in business per year in North America in the late 1990s. There are two different types of go-karts and two types of retailers to sell them. "Fun" karts built for general usage and priced between $700 and $900 are sold through lawn and garden stores and hardware stores. "Racing" karts built especially for high-speed track usage and priced from $3,000 to $5,000 are sold through outlets dedicated to kart sales. Approximately 200,000 fun karts were sold at the retail level in the late 1990s, compared to sales of

——. "Facts and Statistics about Snowmobiling." May 2004. Available from http//www.snowmobile.org .