This industry consists of establishments primarily engaged in the retail sale of cameras, film, and other photographic supplies and equipment. Establishments engaged primarily in the retail sale of video equipment are categorized in SIC 5731: Radio, Television, and Consumer Electronics Stores; those primarily engaged in photo finishing recovered in SIC 7384: Photo finishing Laboratories.

The industry thrives on new technology. Many consumers only shop at photographic supply stores when there is a new lens, camera, or film type that they have heard about and are eager to try. Retailers are eager to remain on the cutting edge of photographic technology and to sell the latest equipment. They also service repeat customers who buy add-ons as well as replacement items such as filters and film. Photo CD technology was hot, as were sales of single-use, disposable cameras. The industry benefited from the Advanced Photo System (APS), a 24mm system acting as a bridge between digital and standard photographic techniques, using high-quality emulsion for its film and a new small hand held camera. By the turn of the century, sales of digital cameras also rose substantially and prices began to fall.

A marketing strategy gaining popularity at the end of the twentieth century was co-branding. A number of the larger film and camera makers agreed to sell their products to specialty stores at substantial discounts. In return, the stores agreed to showcase that manufacturer's products. Eastman-Kodak planned to have more than 500 co-branded sites by 2005.

The photographic equipment and supplies industry was slowed after September 11, 2001, since families were not traveling as much. According to Value Line, Eastman Kodak's 2003 sales dropped 23 percent in 2003. Digital cameras were expected to out perform film cameras by a total of 5 million. Some analysts believe that consumers are moving away from the basic cameras, but the single—use cameras have not lost their popularity. In fact, consumers purchased some 197 million in 2002. The projected number for 2003 was 211 million.

Most of the leading companies in this retail industry are privately owned. Some of the more successful camera and photographic equipment stores include Kits Cameras, Inc. of Kent, Washington; Inkley's, Inc. of Salt Lake City, Utah; Samy's Camera, Inc. of Los Angeles; Southwest Camera of Houston, Texas; and Comgraphics of El Paso, Texas. These retailers, as well as others in the industry, have benefited from the efforts of domestic and 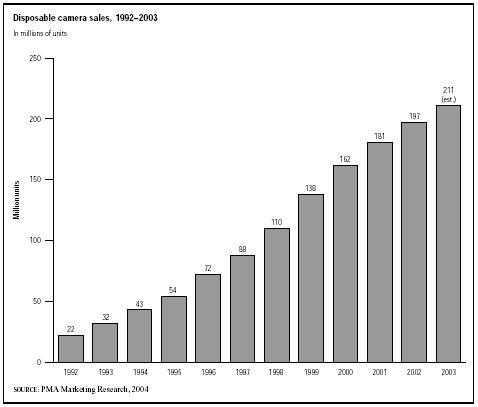 foreign camera and film manufacturers to secure a share of the U.S. consumer marketplace.