Curtain, drapery, and upholstery material stores were a thriving segment of the general home furnishings retail industry during the 2000s. Consumers focused on the home and personalizing their environments, and the industry recognized these lifestyle directions by providing stylish yet relatively low-priced products. Even during recessionary down times, consumers frequently replaced window treatments rather than overhauling the entire room. Reupholstering or purchasing slipcovers for existing furniture was also an alternative to redecorating a room. Furniture covers went from a specialized industry to a more mass-produced segment with many options readily available in discount and chain stores. The popularity of futons also benefited the upholstery segment because the versatile furniture can be covered with a variety of ready-made or custom-made slipcovers.

Curtain and drapery stores were adversely affected by shifting trends in home decorating fashions. Many stores changed dramatically to accommodate the new trends by adding a wider variety of merchandise both for windows and for the home itself. Chains like Blinds to Go emerged, concentrating on providing a single product. The upholstery fabric segment generally benefited from shifting trends in consumer tastes. New technological developments brought a wider range of upholstery fabrics to consumers and retail outlets, leading to increased consumer interest and increased business for retailers. Furniture stores offering custom upholstery services in a variety of prices and styles, such as Custom Expressions, emerged in major markets across the country, sparking consumer interest in upholstery, which trickled down to more established stores selling only upholstery fabrics.

Many of the establishments in the retail curtain and drapery industry were family-owned enterprises located primarily in commercial districts of residential areas, both urban and suburban. These establishments catered to both new homeowners with a limited decorating budget and older customers with more money to spend. The typical store offered ready-made curtains and draperies, custom-made window treatments, a selection of alternative window treatments such as miniblinds and vertical drapes, and, in some cases, kitchen and bath textiles. Kitchen and bath sales helped boost profits, compensating for flagging curtain and drapery sales. To sell their products, curtain and drapery stores relied heavily on attractive displays of merchandise. One type of store display was the vignette, or small wall-window-bed display. Designed to give a customer an idea of a how a coordinated room might look, these displays changed every few months to incorporate a new product line. The vignette's components were easily interchangeable and adaptable. The displayed products were obtained from a host of major manufacturers, who showcased their products at seasonal trade shows attended by buyers or owners of curtain and drapery stores.

A prime example of a family-owned, privately-held curtain and drapery business was Curtainland, a small chain of stores in the suburban New York area. The company was founded in 1975 by the Kanan brothers, who had previous experience in the retail furniture and appliance business. The first store, and the three subsequent Curtainland outlets, were located in areas with a recent influx of new suburban residents. The Kanans believed that the window-treatment areas of department stores did not offer as much variety as their specialty retail business. Curtainland stores aimed to combine a wide selection of products with prices even with or lower than their competitors'. The company tried to hire sales associates with some interior design experience. Curtainland's ability to provide knowledgeable and committed service helped insulate the company from downturns in the soft window-treatment business. The Kanan family played a key role as buyers for Curtainland stores, obtaining the company's merchandise from quarterly trips to curtain and drapery manufacturers' showrooms in New York City. Curtainland stores stocked miniblinds, vertical drapes, curtain and drapery rods, and pleated shades, as well as ready-made curtains, draperies, and matching bedspreads. Bath accessories such as rugs and 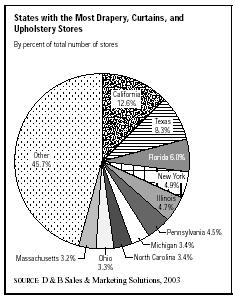 shower curtains also accounted for some of the store's merchandise.

Prior to the 1980s formal draperies were standard fixtures in living room, dining room, and bedroom areas, while lighter-weight curtains were the primary window coverings in more informal rooms such as kitchens and bathrooms. In the 1980s the curtain and drapery store industry was dramatically affected by shifts in home decorating tastes. American window-blind manufacturers developed new technology that opened up a whole new area of hard window treatments—the aluminum mini-blind. This versatile shade came in a variety of colors and styles, was relatively inexpensive, did not require drycleaning, and gave any room a modern look. Soon Taiwan restructured its lightweight plastics industry to produce vinyl imitations of the miniblind that were cheaper than miniblinds manufactured in the United States. By the 1990s miniblinds were standard window coverings in millions of households across the United States, which had a detrimental effect on curtain and drapery sales. As a result, many curtain and drapery manufacturers and retail outlets did not survive the change in style, and they were forced to exit the business or adapt their product lines to capture other segments of the home-furnishings business.

The entry of discount retailers into the home-furnishings market has negatively affected the industry. Stores such as Kohl's and K-Mart offer a wide selection of ready-made curtains and draperies in the latest styles at bargain rates. Discounters' sales have thrived as they turned their domestics divisions into extremely competitive destinations. While K-Mart created its program based on sharp merchandising and the reputation of home fashions expert Martha Stewart, Target had its design staff establish a fashion direction conforming to larger style trends. Discount Store News noted, "One of the big questions that remains about the domestics market isn't whether major discounters will win more share of the market but rather what share of market they will leave for other retailers."

In the late-1990s the leaders in the curtain and drapery industry were stores that specialized in home goods as a whole. The leader was Bed, Bath & Beyond, Inc., of Springfield, New Jersey, with $1.4 billion in sales in 1999, which represented a 31 percent sales growth from 1998. The company operated 240 warehouse-type stores in 38 states nationwide and employed 9,400 people. Bed Bath & Beyond posted sales of $4.5 billion for 2004. Linens 'n Things, Inc., of Clifton, New Jersey, held the number two spot with $1.3 billion in sales in 1999, a 22 percent increase over the previous year. Linens operated nearly 200 superstores in 38 states and had 9,700 employees in 1998. Overall, the emphasis shifted towards "one-stop shopping" where individuals could furnish an entire house with one trip to the store. The company generated sales of $2.4 billion for 2003.

Otherwise, the industry was dominated by smaller, specialized companies such as Plainview, New York-based Curtains and Home, Inc. Most of its stores were along the eastern seaboard in New York, Pennsylvania, Maryland, and Virginia. The company was known as a retailer of affordable curtains, drapes, and other home furnishings, such as shower curtains and table linens. Three D Departments, Inc., based in Irvine, California, was another large retailer of curtains and draperies, as was Hunter Douglas, Inc., based in Upper Saddle River, New Jersey. The company offered a variety of blinds, shades, and draperies. Hunter Douglas also sold its window treatments to Home Depot, Fortunoff, and J.C. Penny.

An innovative Connecticut-based business, the Drapery Exchange, Inc., stocked draperies on consignment and sold them to consumers at a reduced price. Local interior designers turned over their leftover inventory of custom-made drapery and window treatment ensembles, originally created for design showrooms, designer showhouses, or magazine layouts. The Drapery Exchange then sold these custom-made goods at a substantially reduced price.

Window Works, of Pompano Beach, Florida, was another aggressive participant in the curtain and drapery store industry. The company was the franchiser of over 100 custom window treatment stores across the country and relied heavily on sophisticated advertising and a contemporary look in its outlets to attract upscale but price-conscious consumers. Custom-made blinds accounted for a large part of store sales, but Window Works also stocked an array of products from drapery and curtain manufacturers.