The retail floor covering industry includes sellers of rugs and carpets, linoleum, asphalt tile, and ceramic tile. Floor covering retailers include specialty stores, department stores, home improvement stores, and mass merchandisers. The total number of retail floor covering stores was 30,593 in 2003, with combined sales of $17.3 billion. The employee number climbed to 128,163, and the average retail store employed four people. States with the majority of establishments were California with 3,459 and sales of $2.2 billion. Florida had 2,467 establishments and generated $1.2 billion in sales. Texas numbered 2,091 establishments with shared sales of $1.1 billion. 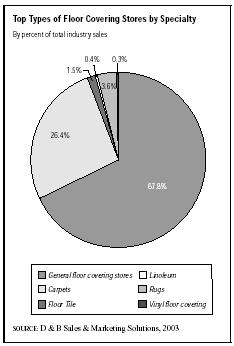 Reflecting the buoyancy of the U.S. economy during the mid-1990s, sales at the nation's floor covering stores surged nearly 72 percent in the five years from 1992 to 1997. This strength in sales allowed retailers to increase the number of establishments engaged in this trade from 13,640 in 1992 to 16,603 in 1997, a gain of nearly 22 percent. Employment in the industry also surged ahead of past totals during this five-year period, rising 40 percent from 1992 to 1997. Even more dramatic was the increase in the size of the industry's annual payroll, which climbed nearly 90 percent between 1992 and 1997.

At the beginning of the 1990s, the industry was struggling to shake off the effects of an economic recession, which had significantly dampened demand. A sales decline in 1991 was followed by a modest recovery in 1992. The recession hit the floor covering industry particularly hard for a variety of reasons. Among the factors affecting the sector during the slowdown was a sharp decline in residential construction, low consumer confience, and consumer cutbacks on big-ticket home improvement expenditures. Home remodeling and new home purchases are typically the most important events spurring floor covering sales. Carpeting, in particular, is sensitive to economic fluctuations and is closely tied to the sales' rate for existing homes: most carpet sales occur in the replacement market, rather than the new home market.

In addition, as Industry Surveys noted, "the consolidation of the department store industry in the 1980s and the high interest charges that arose from this event forced these retailers to become more cost-conscious. As a result, they pared buying staffs and employed fewer suppliers. They also focused on carrying leaner inventories, historically their largest expense." These business conditions, coupled with competition from mass merchandisers such as Wal-Mart, J.C. Penney, and K-Mart in floor covering retail, combined to pinch floor covering retailers. The improved economy of the middle and later 1990s provided floor covering retailers with much higher sales.