Meat markets, including freezer provisioners, are the dominant types of retail establishments found in this classification, with 5,665 retail outlets. Meat and fish markets consisted of 2,070 establishments, followed by fish and seafood with 1,752 establishments. Combined, they generated approximately $3.8 billion in sales, and controlled about 85 percent of the overall market. States with the highest number of establishments were New York with 1,564, California with 1,305, and Texas with 759.

According to the U.S. Census Bureau, the majority of these establishments were small—employing fewer than five people. In 2001, 1,940 markets had fewer than five employees; 350 had between five and nine; 142 had 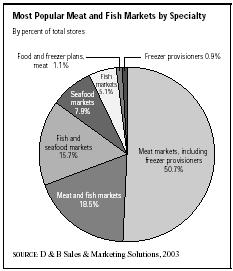 The retail meat and fish market industry, like other retail food markets, experienced a steady downsizing throughout the early to mid-1990s, due in large part to competition from supermarkets, superstores, and wholesale clubs that catered to consumers' desire for one-stop shopping and low prices. Total sales for this industry fell from $6.05 billion in 1993 to $5.97 billion in 1996, and sales dropped 6 percent from December 1995 to December 1996.

According to Dun's Census of American Business, the number of retail meat and fish markets shrunk steadily throughout the 1990s. There were 27,788 markets in 1993; by 1996 that number dropped to 20,811. The majority of these establishments employed fewer than five people. In 1996 about 17,000 markets had nine or fewer employees; about 3,000 employed between 10 and 50; and roughly 450 markets had more than 50 employees.

Independent meat and fish markets face continued competition from supermarket chains and superstores. The 1994 Industrial Outlook interpreted the shift in some consumer segments from one-stop shopping to more of "buy as you go" attitude as beneficial to independent retailers. New retail strategies, combined with these consumer changes, could help stores hold on to and increase their market share in this industry.