In 2001, the U.S. Census Bureau reported a total of 3,382 establishments engaged in the retail sale of fresh 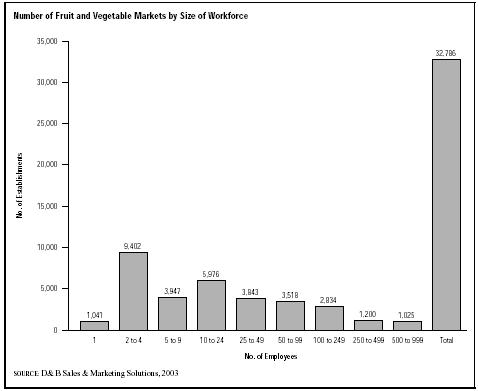 fruits and vegetables. There were 20,615 employees and a payroll of $374,488. The employee figure climbed to 32,786 in 2003. The total sales were approximately $2.4 billion. States operating the largest number of establishments were California with 813, New York with 850, and Florida with 613. Combined, they accounted for more than 35 percent of the market.

The retail fresh fruit and vegetable market industry, like other retail food markets, experienced declining sales throughout the early to mid-1990s, largely due to competition from supermarkets, superstores, wholesale clubs, and discount stores. An additional competitor was the newly classified "G" stores. Operated by large gasoline companies, they offered a mix of items including fresh fruit and vegetables. The total number of establishments in this industry fell from 8,265 in 1997 to 6,462 in 2003.

According to D&B Sales & Marketing Solutions, almost 80 percent of fresh fruit and vegetable markets (a total of 5,132) were small, employing less than four persons, while 641 establishments employed between five and nine people. At the other end of the scale, only 23 outlets employed more than 100 people.

Leading companies in this industry are Fresh America, Corp., based in Houston, Texas; and Norman Brothers Produce, based in Miami, Florida.