According to the U.S. Census Bureau, there were 8,787 establishments engaged in the retail sale of stationery in 2001, employing approximately 127,922 people with an annual payroll of $2.7 billion. By 2003, there were approximately 12,377 establishments generating $19 billion in sales. Average sales per establishment were $2.3 million. The number of employees climbed slightly to 132,781. The largest segment was office forms and supplies with 7,856 businesses, accounting for more than 63 percent of the overall market. Stationery stores numbered 3,060 businesses, and accounted for more than 24 percent of the market. School supplies numbered 888 businesses, and writing supplies numbered 489. States with the most establishments were California with 1,683, New York with 1,107, and Texas with 1,046. Combined, they employed 34,163 people, and controlled 31 percent of the market.

Sales in the retail stationery industry were somewhat erratic in the 1990s. The total sales volume was stagnant or declining slightly in the early 1990s. However, the industry recovered and grew slightly in the mid-1990s and continued to grow in the later part of the decade. Industry sales rose significantly in the late 1990s; sales of office supply superstore chains Staples, Office Depot, and Office Max together had estimated sales of $13.2 billion in 1997. Staples reported sales of $7.1 billion for 1998, while Office Depot's sales reached $8.9 billion. Office-Max, the smallest of the three superstores, had sales of $4.3 billion in 1998. These superstores nonetheless are discussed in this category since they sell the same goods as smaller stationery stores and have a dramatic impact on those stores. While office superstores have become immensely popular, discounters, supermarkets, and drug stores all have seen significant growth in stationery sales.

Office products have become the central component of many stationery stores. This change also has affected the kinds of stationery stores that control the market. Many smaller, independent dealers have been merged or acquired, while several large retailers have grown even larger. An indication of the depth of the shift is that the trade association formerly known as the National Stationers Association is currently known as the National Office Products Association (NOPA).

According to the U.S. Bureau of the Census, establishments that sell to the general public are classified as retail traders, even if the material they sell is not used in a household. Establishments that sell exclusively to businesses, institutional and industrial establishments are classified in wholesale trade. Most retail stationery stores categorized in this industry have fixed addresses, advertise to attract buyers, and buy merchandise in addition to selling it. Commodity classifications are assigned according to the primary source of an establishment's receipts. In the case of the stationery store industry, this means that a stationery store may sell office supplies but must derive most of its receipts from stationery sales.

The supply chain to stationery stores begins with manufacturers that produce office supplies. These firms sell some products directly to retail dealers, and other products are sold first to a wholesaler and then to a dealer. A growing number of manufacturers have begun to follow the practice of selling their merchandise directly to dealers. Warehouse clubs (such as Sam's Club), superstores (such as Office Depot), and discount stores (such as Kmart) buy almost exclusively from manufacturers.

In 1775, pioneer papermakers of the now-legendary Crane family produced the paper used for the first currency of the young colonies. That paper was engraved by Paul Revere. The Crane family drew on the European tradition of making paper from cotton fibers and sold its products at the finest stores. Crane stationery and papers are sold at Tiffany's and fine department stores, but as businesses grew in the nineteenth century, more typical mass-market quality papers were developed. Early stationers sold business stationery as well as other products that could be used in an office.

During the twentieth century, business supplies shifted from typing paper, envelopes, and writing utensils to electronic products. Each of these products had replaceable parts: inkwells and cartridges for pens, ribbons for typewriters, and later, computer supplies such as printer ribbons, diskettes, and computer-appropriate paper and labels. The stationery stores responded by expanding and changing their inventories to supply all of the needs of the new business world.

The stationery store industry underwent a dramatic change in the 1980s and 1990s. As computers began to revolutionize the business world in the late 1970s, suppliers to businesses changed as well. Stationers have had to shift their focus away from stationery products toward the ever-growing demand for office products. Greeting cards, which are not part of this industry, are still sold in many stationery stores. Likewise, large office products, such as office furniture and computer equipment, are often carried by stationery stores but are not covered in this industry.

Perhaps the biggest development in this industry in the mid-1990s was the proposed acquisition by Staples Inc. of Office Depot Inc., a combination of two of the largest U.S. office supplies superstore chains. Announced in September 1996, the proposed merger was seen by stock market analysts as a positive development for both the companies and the industry, largely because it would help to avoid "destructive" price competition as the superstore market becomes saturated with stores.

Stock market analysts had expected the merger to be a very positive development, both for Staples and its principal competitor, OfficeMax. By combining resources and management, the merged company was expected to save more than $400 million in costs over three years.

This merger was blocked by the U.S. Federal Trade Commission (FTC). The FTC charged that the proposed merger would result in less competition and higher prices. The FTC previously had raised serious objections to the merger but Staples responded to the FTC's objections by agreeing to sell 63 Office Depot and Staples stores to OfficeMax Inc. for $108.8 million. The group of stores included some of the two chains' most profitable stores. Despite Staples' vow to fight the FTC challenge, the merger effort was eventually aborted in 1997.

Besides the growth of office product superstores and the consolidation of smaller stationery store chains, one trend that both small and large establishments in this industry were watching in the 1990s was the increase in the number of home offices. For stationery stores, this meant that more consumers would purchase items individually rather than for entire staffs. Special needs of the home office user include convenient hours and locations, good return policies, broad selection, and products offered in small quantities.

In addition to the growing number of home businesses, stationery stores were affected by consumers' increasing environmental concerns. After the Federal Resource Conservation and Recovery Act was implemented, Stuart Hall was among the first recycled paper products sold in stationery stores. However, many consumers did not want to compromise on price or quality, and some environmentally friendly paper products were more expensive than those made from virgin material. Consequently, the growth of recycled paper in the market has been slower than expected.

The overall industry is extending its market presence via online sales. Industry leader, Staples generated $2.1 billion in Internet sales for 2003, which was a 31 percent increase. The overall Internet related sales account for over half of Staples worldwide sales, and an additional $15.9 percent of total sales. Office Depot Inc. experienced the same results with online sales of $2.6 billion for 2003. This was an increase of 25 percent, over 2002. In addition, total Internet sales accounted for about 21 percent of overall sales, up slightly from $18.3 percent in 2002.

Unlike the proposed merger of Staples Inc., and Office Depot, Inc. that had been blocked by the FTC back in 1996, the merger between Boise Cascade Office Products and Office Max placed them in an improved competitive environment. Boise Cascade Office Products located in Itasca, Illinois acquired OfficeMax in 2003. Combined, they would generate approximately $7 billion in annual sales that would provide them with a slighter competitive advantage over rivals Staples, and Office Depot. The industry leader, Staples generated $13.2 billion in sales. Office Depot was close behind with $11.4 billion in sales. OfficeMax, in a distant third, generated $4.77 billion.

For the future, many sources predicted that independent dealers would be fewer in number and the surviving units would likely combine into new associations and groups. National distribution networks and more partnering relationships between manufacturers, wholesalers and dealers were expected to introduce more efficiencies to the stationery distribution system.

At one time, stationery retailers marketed their products to all of their prospective customers in the same way. However, the multitude of customers and their diversity of needs has forced dealers to develop sophisticated sales strategies that enable them to sell parts of their inventories to specifically targeted consumers. They have had to develop sophisticated and focused marketing plans, recognizing that people who buy stationery and office supplies can choose among catalog dealers, warehouse clubs, commercial stationers, superstores, and retail stationers.

While Staples is considered to be the leader among the office superstores, Office Depot is larger and had greater sales than both Staples and OfficeMax in 1998. Staples has the youngest store base in the industry and has implemented a strategy of building smaller stores and saturating a market aggressively.

The growth of these retail superstores has been dramatic. Office Depot opened 100 stores in 1998 and planned to expand its store count by 15 percent annually through 2003. Staples plans to open 170 stores in 2000, which would eclipse Office Depot's proposed number by almost 20.

These superstores carried office supplies and products at prices that often were far below those of their competitors. They carried brand-name products and serviced small and medium-sized businesses with stores conveniently located in both suburban and urban areas. Most of the stores have high-volume operations and carry top stationery brands.

Among the smaller stationery stores, about 49 percent of the employees were cashiers; 8 percent were marketing and sales worker supervisors; 7 percent were store clerks; 6 percent were general managers; and the remaining 22 percent were spread across a number of job categories. Stationery Stores 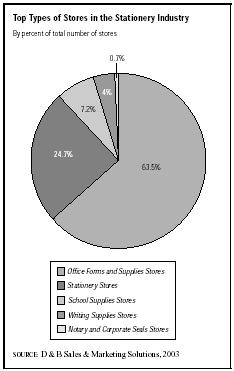 The American stationery and office supplies industry was one of the world's largest. With the introduction of superstores and competitive pricing, the U.S. industry saw further recognition of its leadership in the international market. Distributors of office supplies began doing more business abroad in the early to mid-1990s, while prices for technologically advanced items in the U.S. market dropped significantly. Staples has tapped into the overseas market; in 1999 the company boasted 63 stores in the United Kingdom, 45 in Germany, 21 in the Netherlands, and 6 in Portugal. In early 1999 Office Depot had a total of 87 locations in Mexico, France, Israel, Poland, Columbia, Japan, Hungary, and Thailand. As of late 1999, OfficeMax did not operate any stores in Europe.

Modern technology has had a profound influence on the products sold by stationery and office supplies stores. Dealers in office supplies used to sell calculators and electric staplers, while office machines dealers sold copiers, word processors, fax machines, and computers. However, the distinction has blurred in the 1990s. For instance, technological expertise and after-care service requirements became a must for computerized equipment. Calculator prices declined to the point that they became replacement items like typewriter ribbons. Typewriters themselves were almost completely replaced by word processors and computers. As more information was conveyed electronically from one terminal to another, more steps involving paper were eliminated. Again, the effect on the stationery store industry was a loss in net sales.