The retail fine jewelry industry is divided into two types of enterprises: chain stores and independents, with chain stores predominant. The early 1990s ushered in a recessionary era of poor sales and bankruptcies, but the industry had regained valuable footing by mid-decade. By the end of the decade, U.S. annual fine jewelry and watch sales totaled $52.1 billion. A strong economy and low unemployment had served to boost the sale of luxury goods, including jewelry, as the industry headed into 2000. However, since the jewelry industry is cyclical in nature, retailers know that if the economy turns down and consumer discretionary spending slows, they will be hit first.

For retailers, 1999 proved to be a stellar year for sales of watches and related products, and this trend was expected to continue. Watch sales were predicted to rise due in part to the influence of fashion designers who in the late 1990s made watches a status symbol. Technology was also expected to fuel sales with the advent of watches that connect to the Internet.

In the independent jewelry retail business, participants have fought a tough battle to maintain their identity in the competitive jewelry business of the 1990s. One such tactic has been the introduction of in-house credit cards, engineered by retailers and their banks. Such lines of credit boost sales and often provide the customer with a much lower interest rate and better terms.

According to statistics offered by Claritas Inc., Chicago will lead in jewelry and watch sales, totaling about $2.5 billion, into 2007. The average consumer will spend about $500 per year on fine jewelry. The projected jewelry sales were expected to rise to $61.8 billion by 2007, from $52.1 billion in 2002. Although Wal-Mart generated 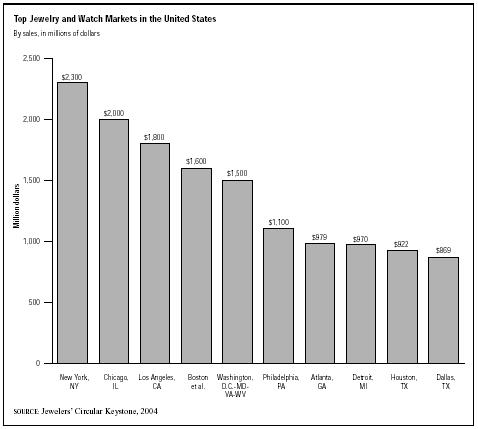 Among the chains, the retail jewelry industry is led by some well-known names: Zale Corp., Sterling Inc., and Tiffany and Co. Founded in 1924, the Irving, Texas-based Zale Corp., which holds the number-one spot in the industry, posted sales of $1.25 billion in 1997 and in 1999 increased sales by 14 percent to $1.43 billion. That same year it posted a net income of $80.9 million, up from $31.5 million in 1995. Zale has 1,345 outlets in the United States and Canada and controls about 5 percent of the nation's $40 billion jewelry industry. Stores operate under the names Zales Outlets; Peoples Jewelers; Zales Jewelers, which carries lower-priced items; Gordon's Jewelers, which carries mid-priced items plus regional fashion jewelry; and Bailey, Banks & Biddle, which carries the upscale product lines.

Zale's hegemony was all the more impressive given that it had emerged from bankruptcy in 1993. With a new chair, Robert DiNicola, the company was showing a revitalized strategy by the mid-1990s. DiNicola lowered prices on best-selling items considerably, which increased sales. Another strategy was to "make Zales the McDonald's of the jewelry business," wrote Amy Feldman in Forbes, "with national ads and standardized goods." Due to changing markets, Zale's increased spending on advertising (particularly television), incorporated a toll-free number in its newspaper inserts and direct mail catalogs, and expanded into the mail order catalog business late in 1996. By the late 1990s, it was selling merchandise direct on its Web site at www.zales.com. In 1999, DiNicola, who was credited with turning the company around, stepped down as the chief executive turning over the reins to the president and chief operating officer, Beryl Raff.

Meanwhile, what has become perhaps the most famous name in the history of American jewelry stores, Tiffany, opened two new stores in the United States and posted record sales for the 1996 holiday season. A new marketing strategy that aimed to lure Americans of a wider strata of income levels into Tiffany stores seemed to work well. The Fifth Avenue-headquartered firm's net sales for fiscal 1998 hit $1.17 million.

As retail jewelers entered the twenty-first century, they faced heavy competition from mass merchants, such as home shopping channels, mail-order firms, and discounters. These mass merchants, which were not even in existence 30 years ago, have snatched up 25 percent of the estimated total $40 billion U.S. annual fine jewelry and watch sales market. Jewelers are not worried, however, believing it easier to turn a sale with the product in hand.

Another change in the industry was Internet sales. Online sales, which now make up less than 1 percent of total retail sales, are projected to increase exponentially well into the next century. Jewelers will have to get online to be competitive, but several, including Zale and Tiffany, already offer direct online sales. Specialty retailers have also included the distribution of store catalogs in order to generate sales.

Some retail jewelers may soon be offering synthetic diamonds at a fraction of the cost of the natural diamond. Apollo Diamond Inc. located in Boston, Massachusetts, and Gemesis Corp. of Sarasota, Florida have manufactured synthetic diamonds within a laboratory setting versus deep down in the earth. There has been tremendous response to the new technology. An online poll conducted by CNBC, revealed about 71 percent of consumers would also be willing to purchase the synthetic diamond opposed to the natural diamond. Apollo has in fact began selling its yellow synthetic diamonds throughout various retailers. The popularity for colored stones remained strong, and Gemesis was working on different shades, expecting to offer them sometime in the later part of 2004.