In the early 2000s, roughly 180 companies producing rope, cordage, and twine products, according to the U.S. Department of Commerce, Bureau of the Census. These businesses shipped $661 million worth of products in 2001, down from $817 million in 1995. They employed 6,539 people and had a total estimated payroll of $180 million. Their 4,965 production workers earned an average hourly wage of $9.41. The industry spent $445 million on materials and paid $25 million for capital expenditures. States with the largest concentrations of businesses in this category included Texas, California, Florida, Washington, and Georgia.

Generally, cordage and twine plants are not as modern as other textile producers. Most serve niche markets with closely controlled product specifications. The marine industry constitutes one of the largest markets for this category. During the mid-1990s, though, that market declined when boat sales dropped because of a new luxury tax that was levied on that industry. After a brief peak during the booming economic years of the late 1990s, that market declined again in the early 2000s when the U.S. economy slipped into a recession.

Almost all cordage and twine makers buy their yarn from sales yarn mills. Two or more strands of yarn are then twisted (plied) a certain number of turns per inch. Depending on the intended use for the product, cabling follows the twisting process. Cabling is similar to twisting except that where twisting involves wrapping several 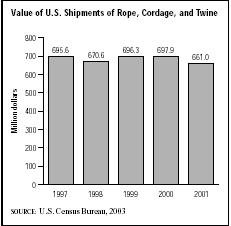 single strands of yarn together, cabling wraps several strands of plied yarns together. The cabling continues until the proper size of twine, cord, or rope is developed.

Among the largest of the establishments in this industry was Wire Rope Corporation of America Inc. of St. Joseph, Missouri, with 500 employees and sales of approximately $80 million in the early 2000s. Sackner Products (a division of Jason Inc. based in Grand Rapids, Michigan) had 300 employees and estimated sales of $55 million. Other leaders included Lehigh Group of Macungie, Pennsylvania, which was acquired by Jarden Corp. in 2003; Mitchellace Inc. of Portsmouth, Ohio, which celebrated its 100th anniversary in 2002; Columbian Rope Co. of Guntown, Mississippi; and Fitec International Inc. of Memphis, Tennessee.