This category covers companies making textile products not included in other industry classifications. These include linen, jute, and felt goods; padding and upholstery filling; and processed waste and recovered fibers and flock. Establishments that prepare textile fibers for spinning, such as wool scouring and carbonizing, and combing and converting tow to top, are also grouped here.

The U.S. Department of Commerce, Bureau of the Census reports that companies in this category shipped $5.3 billion worth of goods in 2001, down substantially from $6.3 billion in 1999. This downturn reflected an overall decline in the textiles industry, the result of weak economic conditions in the United States, as well as increased imports from countries like China. In 2000, this category employed 64,400 workers (51,438 in production), with a total estimated payroll of $1.43 billion.

The top three industry leaders for this category in 2003 were Milliken and Co. of Spartanburg, South Carolina, with $3.4 billion in sales and 14,000 employees; WestPoint Stevens Inc. of West Point, Georgia, which filed bankruptcy in 2003 after sales declined 9.1 percent to $1.6 billion and losses totaled $133 million that year; and Atlanta-based Interface Inc., with 2003 sales of almost $923 million and 5,210 employees. Other significant companies in the industry included Russell Corp. Knit Apparel Division of Alexander City, Alabama; Carpenter 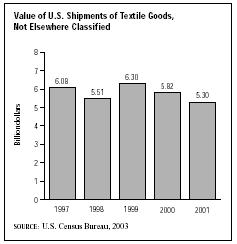 In the 1990s, environmental concerns affected business in this category, especially those using textiles byproducts. Taking by-products to the landfill used to be common practice among all textile plants. Now that this is neither economically feasible nor environmentally acceptable, plants must find other outlets for their byproducts. This opened up new opportunities for companies in this classification. As of the early 2000s, firms were continuing to study the feasibility of recycling textile waste.