Products in this category range from heavy woolen socks used by hunters to lightweight anklets worn by small children. They can be made from cotton, wool, nylon, polyester, polypropylene, rayon, mohair, and other fibers, as well as blends of two or more fibers. The fabric is produced on small-diameter knitting machines.

Unlike most companies that weave fabric, establishments in this segment usually purchase yarn instead of making their own because it would be too costly and inefficient for each facility to manufacture the many types of yarn used to make hosiery. After buying the yarn, most companies in this category complete their own dyeing, finishing, and packaging. At that point, their merchandise is ready for retail sale.

Of the plants in operation, more than 50 percent had at least 20 employees. Most establishments in the segment were concentrated in the Southeast, particularly in North Carolina and Alabama. 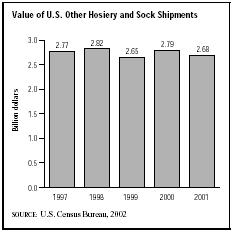 During the late 1990s and early 2000s, hosiery manufacturers tried to operate more efficiently—and some companies merged—to compete more effectively in the global marketplace. Kayser-Roth Corp. was acquired by an Italian hosiery firm named Golden Lady. (It had previously been owned by a Mexican company.) Renfro Corp. and Ridgeview Inc. were two leading hosiery makers that closed factories to reduce their expenses. In 2001, Ridgeview filed for Chapter 11 bankruptcy protection. Its assets were later acquired by Great American Knitting Mills. Another leading industry player, Chipman-Union Inc., filed bankruptcy in 2002.

The U.S. Census Bureau reported that roughly 400 companies operated in this category in the early 2000s. They shipped $2.9 billion worth of goods, spent $1.4 billion on materials, and paid out $96 million for capital expenditures. They employed 33,265 people, including 28,594 production workers who earned an average hourly wage of $10.63.