According to the U.S. Census Bureau, approximately 150 establishments were engaged in the production of women's full-length and knee-length hosiery in the early 2000s. The industry shipped $973 million worth of goods, spent $637 million on materials, and paid $35 million for capital expenditures. It employed 13,497 people, including 11,567 production workers who earned an average hourly wage of $10.62. About half of the establishments in this category had at least 20 employees.

More than half of the establishments in this category are located in North Carolina, home to 70 percent of the largest companies producing women's hosiery (except socks). Alabama and California also have relatively large concentrations of businesses in this industry.

Most women's hosiery products are made of textured nylon and produced on small-diameter knitting machines. The processes involved in production of the goods covered by this category include: production of POY (partially oriented yarn) nylon filament by fiber producers; texturizing (or texturing) the nylon filament; knitting the filament nylon into the hosiery product; boarding the hosiery to obtain proper size and shape; and finishing the hosiery products and packaging them. Texturing of the nylon hosiery yarn is covered in SIC 2282: Yarn Texturizing, Throwing, Twisting, and Winding Mills.

The biggest event in the development of hosiery manufacturing was DuPont's invention of nylon, which was introduced to the public in 1938, replacing the baggier cotton or more expensive silk stockings. Finding a commercially palatable name for what was officially polyhexamethyleneadipamide took more than two years. The word "nylon," is a derivative of nylon stockings' widely rumored "no-run" feature.

The market for sheer hosiery had declined because "the barelegged look" (wearing no stockings) became fashionable and because a trend toward more casual clothes encouraged women to wear slacks and socks instead of short dresses and nylon stockings. Manufacturers responded by conducting consumer research to help them launch new products and improve old ones to meet women's needs. For example, some lines of hosiery provided the barelegged look but covered imperfections in women's legs. Comfort, durability, body contouring, and overall high quality became increasingly important factors in hosiery. Nevertheless, demand for sheer hosiery and tights continued to drop, according to the December 2002 issue of WWD. "The legwear category, which is estimated to have annual U.S. sales of about three billion dollars, has been in a slump for several years due, in part, to casual dress codes and the popularity of open-toe shoes, which minimize the need for legwear, particularly sheers."

One of the largest companies producing goods in this category is Sara Lee Corp. (Chicago, Illinois), a diversified 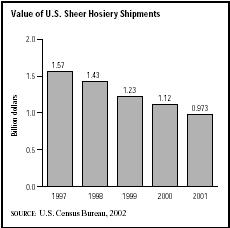 Trade negotiations during the 1990s opened up opportunities for a potential export market. In 1994 trade barriers were reduced in Japan, Canada, and Mexico as a result of the North American Free Trade Agreement (NAFTA). A new World Trade Organization (WTO) was established in 1995, and the Multifiber Arrangement (MFA)—which allowed importing countries to limit the flow of low-cost imports from developing countries—was replaced by the Agreement on Textiles and Clothing (ATC), which required phasing out MFA quotas over a 10-year period. Since the United States has until 2005 to implement the ATC, the legislation's impact on the hosiery industry might not be realized for several years. China was also considered an emerging growth market in the early 2000s, due to its entry into the World Trade Organization.