Nearly 200 establishments were engaged in the production of warp knit goods or lace products in the early 2000s. Employment slipped from a high in 1982 of 21,100 employees working within this classification to 20,500 in 1988, a trend that continued into the 1990s, decreasing to an estimated 13,988 by 2000. The industry's 11,570 production workers earned $255 million that year at an average hourly wage of $9.42. North Carolina had the most mills in this category. Other states with high concentrations of companies in this industry included New York, New Jersey, Rhode Island, Florida, California, and Pennsylvania.

Warp, or flat, knitting machines look like weaving machines but produce fabrics more like those produced on circular knitting machines. Warp knit is a specialized fabric made by a process in which nylon, acetate, and polyester yarns are run lengthwise in the fabric, forming interlocking loops. The cost, compared to that of circular knit techniques, is relatively low.

During the 1980s a slump in clothing sales and a growing flood of inexpensive imports slowed growth in this industry considerably. Throughout the mid-1990s domestic manufacturers remained competitive by introducing new specialty fabrics, such as microdeniers and spandex blends. Microdenier fabrics are stretchy and have a high filament count that gives them a silky feel. Introduced by Guilford Mills Inc. in 1991, this fabric quickly gained a niche market in the warp knit industry. By the late 1990s the market for spandex blends had grown markedly. Spandex was being used in a wide range of warp knit fabrics: foundation garments, swimwear, active wear, lace, hosiery, and medical supplies/clothing. Other popular products included woven fabrics with two-way stretch; sheer fabrics in the 15-, 20-, and 30-denier range; high-denier fabrics for foundation and control garments, blends with Tencel microdenier and acrylic, and performance fabrics with u-v resistance and thermal and antimicrobal properties.

In 1999 Malden Mills Industries Inc. and Patagonia Inc. introduced Polartech Regulator, a high-performance fleece designed for people to use in the back country. One variety of the new fabric featured polyester yarns in a warp knit design. The two companies had also cooperated 13 years earlier to introduce the first polar fleece fabrics for outdoor enthusiasts.

In 2003, the largest company in this category was Guilford Mills Inc. of Greensboro, North Carolina. During the late 1990s, Guilford Mills had started working on a huge textile and garment manufacturing park in Altamira, Mexico, to expand its foreign operations. However, due to increased competition from imports and a sluggish U.S. economy, the firm found itself unable to handle its mounting debt. Guilford Mills filed for Chapter 11 bankruptcy protection in 2002, from which it emerged later in the year. As part of its restructuring, the firm shifted its focus from apparel fabrics to automotive fabrics. Guilford Mills had 2,600 employees and sales of $456 million in 2003, compared to sales of $900 million and 7,000 employees in the late 1990s. 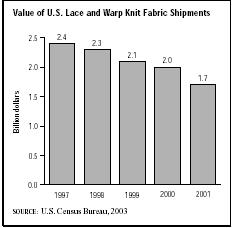 During the mid-1990s the North American Free Trade Agreement (NAFTA) and the General Agreement on Tariffs and Trade (GATT) opened new markets for the textile industry, but also increased foreign competition. Some U.S. textile companies began opening facilities in other countries. For example, in 1994 Guilford Mills had production plants in the United Kingdom and partownership in the largest warp knitting company in Mexico. In 1998 Guilford Mills bought land for another Mexican operation, a textile manufacturing complex that would later supply fabric for an apparel assembly enterprise on the same site. In general, however, despite efforts to expand operations overseas, U.S. textile mills in the early 2000 continued to struggle with increased foreign competition.