Companies in this classification are primarily engaged in knitting gloves and other articles not elsewhere classified. Establishments primarily making woven or knit fabric gloves and mittens from purchased fabrics are classified in SIC 2381: Yarn Spinning Mills.

Many companies in this category are small, family-owned businesses serving niche markets. According to the U.S. Census Bureau, firms in the other apparel knitting mills classification shipped $3.5 billion worth of goods in 2000, compared to $5.03 billion in 1997. One of the largest segments of this industry—knit gloves and mittens—saw the value of product shipments decline from $89.1 million in 1997 to $44.6 million in 2001. This downward trend reflects a general decline in the textiles industry due to increased foreign competition. 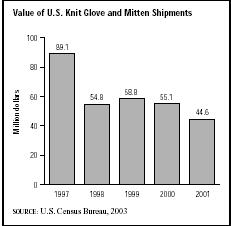 In the early 2000s, more than 60 percent of the firms involved in this industry had at least 20 employees. These larger firms accounted for the majority of the merchandise shipped in the category, and they paid the lion's share of the total wages. North Carolina had the largest number of companies in this segment, followed by New York and New Jersey.

Technological advances during the 1990s occurred in three areas throughout the entire textile industry: computeraided design (CAD), production, and communications; new modular manufacturing systems; and ergonomics (work place instruments designed to improve the safety, health, and efficiency of workers). Smaller firms were often the least efficient. Miscellaneous knitting mills usually had only a few knitting machines, which were either circular or flat machines depending on the product made.

Many of the newer machines were quieter, easier to operate, and designed to reduce workers' stress and injury. Particular emphasis was placed on reducing the repetitive-motion injuries typical of apparel workers that had led to more government regulations, higher workers' compensation costs, and rising health care costs.