This category covers establishments primarily engaged in weaving or braiding narrow fabrics of cotton, wool, silk, and manmade fibers, including glass fibers. These fabrics are generally 12 inches or less in width in their final form but may be made initially in wider widths that are specially constructed for cutting to narrower widths. Also included in this industry are establishments primarily engaged in producing fabric-covered elastic yarn or thread.

Products that fall into the narrow fabrics category include webbing for military use, industrial belting, and automotive seat belts; narrow apparel products such as waistbands and straps; tapes for Venetian blinds, insulating, zippers, and fasteners; ribbons, laces, fringe, and other trimmings; and labels, strapping, and shoelaces.

In the early 2000s nearly 275 U.S. operations engaged in the production of narrow fabrics, according to the U.S. Census Bureau. These companies produced and shipped $1.44 billion worth of narrow fabric products and employed more than 16,600 people. Wages for the industry's 13,458 production workers totaled $274 million, with the average employee earning $10 per hour. The industry spent $625 million on materials.

Narrow fabrics are usually divided into two categories: elastic and rigid (or nonelastic). Narrow fabrics that, when stretched, will return to their original shape and size fall into the elastic group. Elastic narrow fabrics include waistbands and some straps. 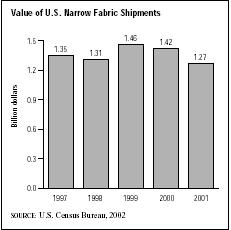 Electronic machinery has become increasingly important to this industry, largely because of the need to be versatile. For example, a company that supplies labels for apparel has to be able to respond quickly when a garment manufacturer suddenly needs to change the labels on its products.

While demand for some other textiles often fluctuates with the economy, the market for narrow fabrics tends to remain fairly stable. This is especially true for webbings for industrial and military use and tapes, bandages, and gauze for the medical trade.

During the early 2000s, products made for cargo and transport, such as cargo lifting straps and automotive tow straps, remained a primary source of income. Sporting goods products, such as golf-bag straps, came in second, followed by automotive seat belts. Sling devices, including many products for use in the medical field, and pet products, such as leashes and collars, rounded out the field.

At the turn of the twenty-first century, North Carolina housed the most narrow fabric mills, followed by California, Massachusetts, New York, and New Jersey. Like many other textile manufacturers, some companies in this category were merging to form larger corporations, shutting down their less profitable plants, and reducing production at other plants. This trend toward consolidation and greater efficiency was triggered in part by changes in international trade agreements, which opened the industry to global competition. The price of raw materials, decreased demand for certain textiles, and technological advances were also factors.

Spartan Mills Inc., of Spartanburg, South Carolina, was one of the largest firms in this industry in the early 2000s, with 4,800 employees and annual sales of $400 million. Another industry leader, Worldtex Inc., of Hickory, North Carolina, posted 2002 sales of $200 million. Worldtex emerged from Chapter 11 bankruptcy protection in 2002. Other leading companies included BGF Industries Inc., of Greensboro, North Carolina; Conso Products Co., of Union, South Carolina; and C.M. Offray and Son Inc., of Chester, New Jersey, which posted sales of $99 million in 2001. C.M. Offray was acquired by Berwick Industries LLC, a unit of CSS Industries Inc., for $45 million in 2002.