This category covers establishments that produce cord and fabric of manmade fibers, cotton, glass, steel, or other materials used for reinforcing rubber tires, industrial belting, fuel cells, and similar applications. Manufacturers of coated fabrics that are not rubberized are covered under SIC 2295: Coated Fabrics, Not Rubberized. For discussion of weaving systems, refer to SIC 2211: Broadwoven Fabric Mills, Cotton.

The U.S. Department of Commerce estimated that 15 U.S. companies produced tire cord and fabrics for the rubber tire industry in the early 2000s. Only three of those companies had fewer than 20 employees, and all but five had at least 100 employees. This industry employed 5,377 people in 2000—including 4,329 production workers who earned an average hourly wage of $7.22. The industry shipped $1.1 billion worth of goods in 2001, and it spent $978.5 million on materials, and paid $70 million in capital expenditures.

While some tire cord was made with steel in the early 2000s, most tire reinforcement came from such synthetic materials as nylon, polyester, and rayon fiber. Of the 744 million tons of manmade fiber used as tire reinforcement worldwide in the 1990s, 57 percent was nylon, nearly 24 percent was polyester, and approximately 19 percent was rayon. In North America the 165 million tons of manmade fiber used in the 1990s was 55 percent polyester, nearly 43 percent nylon, and nearly 2 percent rayon.

Specifications for tire cord were generally dictated by the type of tire made. The three most common types of tires were radial, bias, and high performance. In the United States, radial tires held about 90 percent of the market in the early 1990s, but high-performance tires were becoming increasingly popular. Production demands for tire cord fabric were directly related to the number of new cars and trucks sold, as well as the need for replacement tires on existing automobiles and trucks. 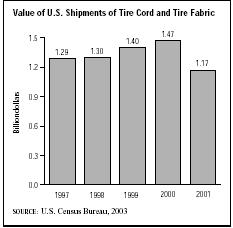 Despite the economic downturn of the early 2000s, sales of high performance tires continued to grow in the United States. According to the Rubber Manufacturer Association, H-rated tires increased their share of the tire replacement market from 9.4 percent to 11.4 percent in 2002. Replacement tire market share for V-rated tires and ZR-rated tires grew from 1.9 percent each to 2.3 percent each in 2002.

The manufacture of tire cord fabrics involved two general processing steps: twisting and weaving. In the twisting process, two or three ends of the tire cord material are twisted together to form a two- or three-ply yarn. The plied yarn then goes through a second round of twisting called cabling, in which two or three strands of the plied yarn are twisted together to form 2/2, 2/3, 3/2, or 3/3 cabled yarn. During weaving, the cabled tire cord serves as the warp or lengthwise yarn in the tire cord fabric. Tire cord makers use a light cotton thread to form the filling or crosswise yarn in the fabric. This lightweight yarn, which holds the cabled tire cord in place, dissolves during the rubberizing process, leaving only lengthwise strands of tire cord in the fabric.