This industry includes establishments primarily engaged in manufacturing coated, impregnated, or laminated textiles and in the special finishing of textiles, such as varnishing and waxing. Establishments primarily engaged in rubberizing purchase fabrics are classified in SIC 3069: Fabricated Rubber Products, Not Elsewhere Classified, and those establishments engaged in dyeing and finishing textiles are classified in various textile industries or SIC 2231: Broadwoven Fabric Mills, Wool (Including Dyeing and Finishing). 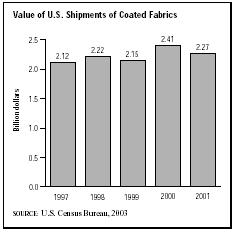 Industry leaders include Collins and Aikman Corp. of Charlotte, North Carolina, with 2003 sales of more than $3.9 billion and 23,900 employees; Hexcel Corp. of Stamford, Connecticut, with 2003 sales of just less than $897 million and 4,084 employees; and Tempe, Arizona-based Cytec Engineered Materials, which changed its name from Cytec Fiberite Inc. in 2002. Cytec Engineered Materials operates as a subsidiary of Cytec Industries Inc., a firm with 4,500 employees and $1.5 billion in 2003 sales. Other significant companies in this industry include Reeves Brothers Inc. of Spartanburg, South Carolina, with $150 million in 2003 sales.