This industry is made up of establishments primarily engaged in spinning yarn wholly or chiefly by weight of cotton, manmade fibers, silk, wool, mohair, or similar animal fibers. Products include acetate and acrylic yarn, made from purchased staple; carded, carpet, combed, and cordage yarn (all of cotton); crochet yarn; and cotton, silk, wood, and manmade staple.

During the early establishment of the industry in the eighteenth century, most spinning mills operated as independent entities. Later, mergers and consolidations in the yarn spinning industry opened diversification opportunities, and many spinning mills became subsidiaries or integrated components of larger carpet or textile mills, or they combined with specialized dyeing facilities. In the 1990s and early 2000s, these mills increasingly used high technology in order to meet the demands of efficient production and improved fiber quality—at the same time protecting the environment and conserving resources.

Protecting the health of textile workers became an issue in the 1980s. The Occupational Safety and Health Administration (OSHA), formed in 1970, set out to minimize 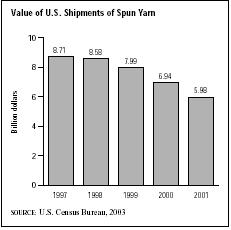 illness and death resulting from cotton dust in textile mills. Referred to as "brown lung" disease, 1988 statistics estimated that 35,000 current and former textile employees had severe cases of "brown lung," and another 100,000 workers had symptoms that indicated early stages of the disease. As unions worked to improve hazardous mill conditions, textile manufacturers often opposed strict sanitation measures imposed by OSHA. In the early 1990s, questions remained as to the legality of some of the restrictions and how best to provide safer factory conditions.

An average two-piece suit currently includes about 67,000 yards of yarn composed of roughly 350 million man-made fibers, textured and colored to produce a natural look. These characteristics basically describe the product flow of yarn spinning mills—from fiber, to yarn, to apparel and home accessories. The actual yarn spinning process entails first cleaning of cotton, wool, silk, or other fibers and then a combing or carding process that turns tangled fibers into straight, even rolls that resemble loose ropes of soft cotton yarn. Depending on the specifications, machines are set to spin yarn of multiple lengths and textures.

Consumers with active lifestyles have called for more livable fabric combining fashion with rough-ready, easy care qualities, and stretchable wear. "Casual Fridays" in the United States, a move toward casual business dress, supports a trend that has been particularly good for cotton. The volume of cotton increased more than 30 percent since 1990, compared to 8 percent for all other fibers. All but 5 percent of spun yarn in the United States was made from cotton and other manmade fibers as of the early 2000s.

As of the early 2000s, yarn spinning mills employed 48,468 workers, of which 43,956 labored in production. Employees worked slightly more than 42 hours a week, averaging five hours of overtime, and were paid $9.02 an hour. Most mills were located in North Carolina. Job growth was expected to continue a decline into the year 2006.

One of the leading firms in this industry in 2003 was Dixie Group Inc. of Chattanooga, Tennessee, with revenues of $234 million, which reflected a more than 50 percent decline. This drop in sales was the result of the firm's divestiture of half its mills and distribution operations to Shaw Industries that year. Other leaders included Parkdale Mills, Inc. of Gastonia, North Carolina, with 2003 revenues of $900 million; and Pharr Yarns Inc. of McAdenville, North Carolina, with 2003 revenues of $230 million.

Yarn spinning mills shared the textile industry's apprehension regarding the impact of the North American Free Trade Agreement (NAFTA). Some yarn spinners foresaw a negative impact based on claims that NAFTA would benefit Canada and Mexico more than the United States. Other spinners envisioned more positive results for the United States, particularly if NAFTA required Canada and Mexico to use yarns produced in North America. The threat of mills closing or a possible mass exodus of plants to Mexico was not perceived as an immediate threat. However, the president of the American Yarn Spinners Association did envision possible long term drawbacks resulting from NAFTA. In his opinion, the more imminent threat to American yarn spinning mills was posed by the General Agreement on Tariffs and Trade (GATT), another trade agreement, which in draft form, proposed a cut in U.S. textile apparel import duties. This concern was validated when the Uruguay Round agreement, which was passed in the late 1990s, mandated the elimination of textile quotas by 2005. Between 1995 and 2002, U.S. exports of fabrics and yarn to Mexico jumped from $1.1 billion to more than $3 billion. However, offsetting the impact of this increase in exports was the 17 percent increase in cotton textiles and apparel imports from China, which reached $9.8 billion in 2002.

In contrast to other industries, growth in technological advances allowed a clear vision for twenty-first century yarn spinning mills. Industry literature referred to spinning systems rather than spinning mills. Daytime operations of spinning departments were eventually expected to be staffed with maintenance technicians, monitoring personnel, and a single supervisor. Night operations were expected to be unstaffed and monitored by sophisticated computers.

Changes in yarn, speed, styles, and other functions became electronic functions or increasingly programmable. One certain outcome of computerization was severely reduced manpower needs. In preparing for the coming high tech environment, industry research and development focused on refining and developing new equipment. Air-jet spinning machines, long recognized for evenness and minimal defects, were expected to achieve increased acceptance because of their ability to spin cotton-polyester blend yarn. If slippage problems could be overcome, the friction spinning machine would be used for medium and fine yarn count range, especially for cotton, due to the high quality and evenness of its output.

Yarn spinners continued to develop new more colorful and functional yarns. In the 1990s, three variations on DuPont's Cordura nylon went on the market. Originally introduced as a tire cord fiber, Cordura was introduced as a fabric for outdoor recreational apparel. In addition to its lightweight qualities, the Cordura/acrylic blend offered twice the abrasion resistance of ballistic nylon, three times that of vinyl or standard nylon, and four times that of cotton. Previous applications included luggage, backpacks, boots, and rugged ski apparel.