485999 (All Other Transit and Ground Passenger Transportation)

A diverse range of transportation modes makes up this industry classification. Among the types of companies in this group were ambulance services, limousine services (with drivers), and aerial tramways and cables cars that were not for amusement or scenic use. Sightseeing buses (non-charter), vanpool operations, and hearse rentals with drivers were also classified in this industry. 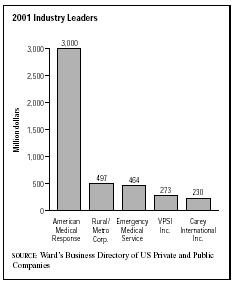 There were 7,915 establishments classified in this industry in the 1990s, according to County Business Patterns. This number decreased after the terrorist attacks of September 11, 2001 caused a general economic downturn. Many smaller companies did not survive. Almost 3,500 of them had been very small operations, with fewer than five employees. The industry employed 130,677 people, with a total annual payroll of $2.2 billion.

The outlook for growth in the ambulance business was favorable, due to an aging population and health care reform measures, which resulted in patients being shifted between facilities more frequently. The industry faced increasing competition, however, for hospital and health maintenance organization contracts from public fire departments, whose personnel also were trained to respond to medical emergencies. Nearly 60 percent of all calls to fire departments in 1995 were medical aid requests.

The Balanced Budget Act of 1997 had significant effects on the ambulance industry, tightening the criteria for Medicare reimbursement of emergency ambulance claims. By 1998, the Health Care Financing Administration had published its Medicare ambulance fee schedule and final rules for determining "medical necessity." The new rules required physician certification for nonemergency ambulance services. Most ambulance companies relied heavily on Medicare claims for business. In some states with large Medicare beneficiary populations, Medicare ambulance services could constitute as much as 60 percent of all transport revenues.

By 2002, ambulance services had to contend with increasing medical malpractice lawsuits. Unlike years ago, when ambulances were basically hospital-run vehicles, the privatization of the industry and the rising expectations for health care in general were contributing to the increase. Such lawsuits have no cap on the award amount a jury can make, and paramedics are sued under the same laws that apply to doctors. In addition, ambulance workers often have to perform their duties with the victims' families watching, a situation doctors are generally spared.

Limousine Services. Limousine services made up another significant share of the miscellaneous local passenger transportation industry. By 1999 there were more than 9,000 limousine companies in the United States, controlling a $4.4 billion industry. However, as with many other industries, there was a general decline in limousine service companies in 2001 and 2002, following the September 11, 2001 terrorist attacks. Many smaller companies did not survive. When the economy began to rebound, the companies that had hung on saw their business increase as a result of less competition. At the close of 2001, there were 3,756 establishments employing 39,165 workers.

As the industry grew in size during the 1990s, and as the economy took a downturn during the 2000s, limousine services sought to widen their customer base by appealing to businesspeople in addition to their usual wedding and prom ridership. In particular, gains were made in the limousine industry's battle against taxicabs and shuttles for airport runs. Indeed, the cost of limousine service was not much higher than for a cab in some places. In New York and elsewhere, however, proposals to allow liveries and limousines to make on-street pickups (strongly opposed by taxicab associations) continued to be a controversial issue in the area of local passenger transportation.

Many of the companies that survived the economic downturn had an increase in international business. Clients, both corporate and private, were relying on U.S. companies to arrange limousine travel on their behalf in other cities, both domestically and abroad. In addition, some companies were specializing in moving groups of people from place to place for corporate events. By 2002, there was a general trend toward luxury sedans, as opposed to the stretch vehicles typically thought of as limousines.

The limousine services industry was no stranger to innovation in services. In the 1990s vanpools also sprang up to fill the gaps left by ordinary forms of local transit. VPSI (formerly Van Pool Services Inc.) was founded in 1973 as an in-house ride-sharing program for Chrysler employees during the energy crunch of that year. It subsequently blossomed into a profitable company subsidiary. National Themes, Ltd. also created a niche in major cities such as New York and Chicago, transporting patrons between bars, restaurants, sports arenas, and other nightspots. Kids Kab, founded in 1991 in the Detroit area to take children to their various activities, was an immediate hit among suburban working mothers. By the mid-1990s there were more than 250 similar companies nationwide.

The largest luxury transportation companies in 2001, based on fleet size, were Carey New York with 524, Mears Transportation Group with 472, Empire International with 390, and Bell Transportation with 376.