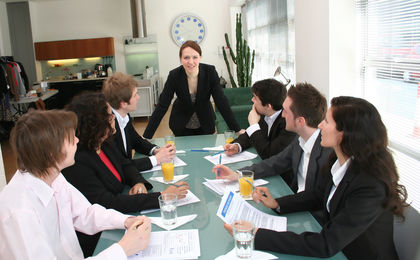 Group decision making is a type of participatory process in which multiple individuals acting collectively, analyze problems or situations, consider and evaluate alternative courses of action, and select from among the alternatives a solution or solutions. The number of people involved in group decision-making varies greatly, but often ranges from two to seven. The individuals in a group may be demographically similar or quite diverse. Decision-making groups may be relatively informal in nature, or formally designated and charged with a specific goal. The process used to arrive at decisions may be unstructured or structured. The nature and composition of groups, their size, demographic makeup, structure, and purpose, all affect their functioning to some degree. The external contingencies faced by groups (time pressure and conflicting goals) impact the development and effectiveness of decision-making groups as well.

In organizations many decisions of consequence are made after some form of group decision-making process is undertaken. However, groups are not the only form of collective work arrangement. Group decision-making should be distinguished from the concepts of teams, teamwork, and self managed teams. Although the words teams and groups are often used interchangeably, scholars increasingly differentiate between the two. The basis for the distinction seems to be that teams act more collectively and achieve greater synergy of effort. Katzenback and Smith spell out specific differences between decision making groups and teams:

There are many methods or procedures that can be used by groups. Each is designed to improve the decision-making process in some way. Some of the more common group decision-making methods are brainstorming, dialetical inquiry, nominal group technique, and the delphi technique.

Brainstorming involves group members verbally suggesting ideas or alternative courses of action. The "brainstorming session" is usually relatively unstructured. The situation at hand is described in as much detail as necessary so that group members have a complete understanding of the issue or problem. The group leader or facilitator then solicits ideas from all members of the group. Usually, the group leader or facilitator will record the ideas presented on a flip chart or marker board. The "generation of alternatives" stage is clearly differentiated from the "alternative evaluation" stage, as group members are not allowed to evaluate suggestions until all ideas have been presented. Once the ideas of the group members have been exhausted, the group members then begin the process of evaluating the utility of the different suggestions presented. Brainstorming is a useful means by which to generate alternatives, but does not offer much in the way of process for the evaluation of alternatives or the selection of a proposed course of action.

One of the difficulties with brainstorming is that despite the prohibition against judging ideas until all group members have had their say, some individuals are hesitant to propose ideas because they fear the judgment or ridicule of other group members. In recent years, some decision-making groups have utilized electronic brainstorming, which allows group members to propose alternatives by means of e-mail or another electronic means, such as an online posting board or discussion room. Members could conceivably offer their ideas anonymously, which should increase the likelihood that individuals will offer unique and creative ideas without fear of the harsh judgment of others.

Dialetical inquiry is a group decision-making technique that focuses on ensuring full consideration of alternatives. Essentially, it involves dividing the group into opposing sides, which debate the advantages and disadvantages of proposed solutions or decisions. A similar group decision-making method, devil's advocacy, requires that one member of the group highlight the potential problems with a proposed decision. Both of these techniques are designed to try and make sure that the group considers all possible ramifications of its decision.

The nominal group technique is a structured decision making process in which group members are required to compose a comprehensive list of their ideas or proposed alternatives in writing. The group members usually record their ideas privately. Once finished, each group member is asked, in turn, to provide one item from their list until all ideas or alternatives have been publicly recorded on a flip chart or marker board. Usually, at this stage of the process verbal exchanges are limited to requests for clarification—no evaluation or criticism of listed ideas is permitted. Once all proposals are listed publicly, the group engages in a discussion of the listed alternatives, which ends in some form of ranking or rating in order of preference. As with brainstorming, the prohibition against criticizing proposals as they are presented is designed to overcome individuals' reluctance to share their ideas. Empirical research conducted on group decision making offers some evidence that the nominal group technique succeeds in generating a greater number of decision alternatives that are of relatively high quality.

The Delphi technique is a group decision-making process that can be used by decision-making groups when the individual members are in different physical locations. The technique was developed at the Rand Corporation. The individuals in the Delphi "group" are usually selected because of the specific knowledge or expertise of the problem they possess. In the Delphi technique, each group member is asked to independently provide ideas, input, and/or alternative solutions to the decision problem in successive stages. These inputs may be provided in a variety of ways, such as e-mail, fax, or online in a discussion room or electronic bulletin board. After each stage in the process, other group members ask questions and alternatives are ranked or rated in some fashion. After an indefinite number of rounds, the group eventually arrives at a consensus decision on the best course of action.

The effectiveness of decision-making groups can be affected by a variety of factors. Thus, it is not possible to suggest that "group decision making is always better" or "group decision making is always worse" than individual decision-making. For example, due to the increased demographic diversity in the workforce, a considerable amount of research has focused on diversity's effect on the effectiveness of group functioning. In general, this research suggests that demographic diversity can sometimes have positive or negative effects, depending on the specific situation. Demographically diverse group may have to over-come social barriers and difficulties in the early stages of group formation and this may slow down the group. However, some research indicates that diverse groups, if effectively managed, tend to generate a wider variety and higher quality of decision alternatives than demographically homogeneous groups.

Despite the fact that there are many situational factors that affect the functioning of groups, research through the years does offer some general guidance about the relative strengths and weaknesses inherent in group decision making. The following section summarizes the major pros and cons of decision making in groups.

Group decision-making, ideally, takes advantage of the diverse strengths and expertise of its members. By tapping the unique qualities of group members, it is possible that the group can generate a greater number of alternatives that are of higher quality than the individual. If a greater number of higher quality alternatives are generated, then it is likely that the group will eventually reach a superior problem solution than the individual.

There are many potential disadvantages to group decision-making. Groups are generally slower to arrive at decisions than individuals, so sometimes it is difficult to utilize them in situations where decisions must be made very quickly. One of the most often cited problems is groupthink. Irving Janis, in his 1972 book Victims of Groupthink, defined the phenomenon as the "deterioration of mental efficiency, reality testing, and moral judgment resulting from in-group pressure." Groupthink occurs when individuals in a group feel pressure to conform to what seems to be the dominant view in the group. Dissenting views of the majority opinion are suppressed and alternative courses of action are not fully explored.

Research suggests that certain characteristics of groups contribute to groupthink. In the first place, if the group does not have an agreed upon process for developing and evaluating alternatives, it is possible that an incomplete set of alternatives will be considered and that different courses of action will not be fully explored. Many of the formal decision-making processes (e.g., nominal group technique and brain-storming) are designed, in part, to reduce the potential for groupthink by ensuring that group members offer and consider a large number of decision alternatives. Secondly, if a powerful leader dominates the group, other group members may quickly conform to the dominant view. Additionally, if the group is under stress and/or time pressure, groupthink may occur. Finally, studies suggest that highly cohesive groups are more susceptible to groupthink.

Group polarization is another potential disadvantage of group decision-making. This is the tendency of the group to converge on more extreme solutions to a problem. The "risky shift" phenomenon is an example of polarization; it occurs when the group decision is a riskier one than any of the group members would have made individually. This may result because individuals in a group sometimes do not feel as much responsibility and accountability for the actions of the group as they would if they were making the decision alone.

Decision-making in groups is a fact of organizational life for many individuals. Because so many individuals spend at least some of their work time in decision-making groups, groups are the subjects of hundreds of research studies each year. Despite this, there is still much to learn about the development and functioning of groups. Research is likely to continue to focus on identifying processes that will make group decision-making more efficient and effective. It is also likely to examine how the internal characteristics of groups (demographic and cognitive diversity) and the external contingencies faced by groups affect their functioning.

van de Ven, A. and A. Delbecq. "The Effectiveness of Nominal, Delphi, and Interacting Group Decision-Making Processes." Academy of Management Journal 17 (1974): 147–178.

Has the Dialogue Decision Process ever been considered in this regard? Users claim a 50 to100 percent improvement in the financial results of using this. The only source to my knowledge is the book "The Meeting of Minds" by Vince Barabba (spelling?)

The above process is of great interest to me as a South African because of it's similarity to our traditional "Indaba" approach to group decision making. Africa always has something to contribute, but sometimes it takes searching for it because our traditional ways are stored only orally
2
Ebenezer Holdbrooke

i wan to know how does stress affect group decision making?