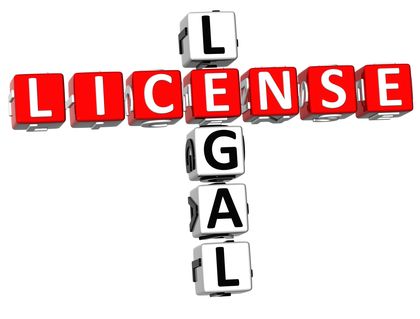 A license provides the legal authority to engage in certain acts. Some licenses are required for the protection of the public. For example, a physician is licensed to assure professional competence, and the owner of a bar and restaurant is licensed to prove moral fitness. Some licenses are designed to raise government revenue (e.g., automobile licenses) or to grant some other party permission to make use of land (e.g., land easement). In business, a license is the granting of permission to use a property right in a limited capacity, while still allowing the licensor to retain ownership. For example, under a licensing agreement a U.S. clothing manufacturer may allow a foreign producer to use its designs and specifications to make clothes.

For a license to exist, there must be a contract between two or more parties giving an explanation as to what property rights the licensor is agreeing to give up to the licensee. This agreement or contract is known as the licensing agreement. These agreements have been in existence since the first copyrights and patents were issued in the late 1700s.

The licensing agreement is a complex legal document that begins by identifying parties to the agreement, as well as the dates of the agreement. It specifies the subject matter to be licensed, including patents and trade secrets. Also specified are the provisions or rights of the license, such as whether it grants exclusive rights or is subject to other agreements. Any limitations, such as territorial and quantity restrictions, are also specified. A final section can specify duration, termination, and related provisions of the agreement.

In business, licensing agreements or arrangements are mutually beneficial. The licensor provides his or her property right and the licensee contributes expertise in the particular industry or territory covered by the license. The resulting relationship becomes much the same as a joint venture or partnership. Licensing agreements include several types, including copyright licensing, patent licensing, merchandise licensing, trademark licensing, and software licensing.

Typically, a trademark owner will grant a license in order to exploit the trademark rights in areas where he or she does not have the appropriate expertise, infrastructure, or capital resources to maximize the value of the right. While the licensor is exploiting the trademark right, the licensee is betting that the name or symbol recognition of the property will influence consumers and motivate them to buy a particular item. Characters that have enjoyed popularity from trademark licensing relationships include Mickey Mouse, Barbie, and the Lion King. A major trend has been for manufacturers and retailers to build the core of their business with trademark-licensed products.

When granting a license, copyright owners are motivated by the prospect of receiving royalties for each product, performance, or copy of their work. In the case of a publication, the copyright is an exclusive right given to an author of an original work. Books, plays, magazines, photography, paintings, sculpture, articles, musical compositions, and radio and television programs are additional commodities that can be copyrighted. The exclusive right also allows copyright owners to reproduce their own work or allow others to do so.

LICENSING AS A GLOBALIZATION
STRATEGY

In its most general sense, licensing is a key mode of entry for firms considering international expansion. A licensing agreement gives a foreign company the rights to produce and/or sell another firm's goods in their country. The agreement also may include production and sales in more than one country. The licensee takes the risks and makes the investment in facilities for handling the manufacturing of the goods, as well as managing other supply chain linkages to deliver and even sell the goods to the final consumer. The licensor is normally paid a royalty on each unit produced and sold. Because there is little investment for the licensor, this method is seen as an easier way to become an international or global company.

Licensing is growing as manufacturers and retailers build their core businesses and change their strategies to include more licenses. For example, Merck and Upjohn have licensed organizations in other parts of the world to manufacture and sell their pharmaceutical products. Other firms using licensing agreements in this way include McDonald's, Nestlé, Anheuser-Busch, and KFC.

The release of hot movies like the Lord of the Rings trilogy also triggers many license agreements and ties between mass merchandisers and licensors for toys, games, and children's apparel. Some retailers go so far as to demand exclusive agreements for licensed apparel and movie tie-in products in order to pursue marketplace differentiation strategies.

Service-based businesses also can benefit from licensing arrangements. Within the airline industry, many of the code-sharing arrangements that allow air-lines to sell each other's seats are much like licensing agreements. Airlines and other firms enter such agreements when they need help commercializing a new technology, expanding a brand franchise globally, or building a marketing image. Rather than entering a new or international market alone, licensing is a faster way to grow a market and achieve market-share dominance. It also may allow firms to gain a larger market for their non-licensed products.

In the early 2000s a growing number of technology companies began launching intellectual property (IP) licensing programs in order to turn dormant projects into revenue, penetrate new markets, and evaluate potential business partners. These firms conducted inventories of their knowledge bases and patent families, and identified technologies that were outside the core business yet still offered some potential for development. They then sought to license these technologies to other firms.

In Licensing Journal, George A. Frank explained: "Patents that some corporations had obtained for reasons not directly related to the development or transfer of technology were proving to be a vast untapped resource. IP licensing has now become a tremendous income source, and indeed is not an important benchmark by which a corporation's success is measured" (2004). IBM, for example, earns more than $1 billion per year from its IP licensing program.

There are some risks and disadvantages to licensing. The firm may lose control over the manufacture and marketing of its goods in other countries. As a mode of international market entry, licensing also may be less profitable than other choices because returns must be shared between two parties. There even is a risk that the foreign licensee may sell a similar competitive product after the license agreement expires. Other risks and issues involve selecting a partner, as well as all of the general uncertainties in doing business with an international partner, including language, culture, political risk, and currency fluctuations. Alternatives to licensing include exporting, acquisitions, establishing a wholly owned international subsidiary, franchising, and forming strategic alliances.

Bradbury, Danny. "Breaking the Licensing Mould: Software Licensing Models Have Gone Through Some Changes in Recent Years, but None Are as Controversial as Microsoft's Latest Initiative." MicroScope 32, no. 3 (2002).