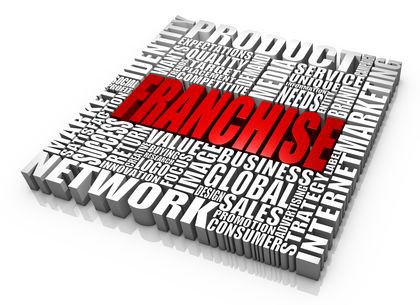 Business-format franchising exists when a franchisor allows someone to market products or service, using the business name or trademark, in return for fess and royalties. When franchising is mentioned, most people think of this business-format franchising, like McDonald's, AAMCO Transmission, or Molly Maid. There is also product or trademark franchising. This is a limited franchise where a manufacturer may grant another party license to sell goods produced by the manufacturer. This might includes sales of cars through dealerships (e.g., Ford dealerships), sales of gasoline through service stations (e.g., Shell stations), and sales of soft drinks through local franchising (e.g., Coca Cola bottlers). A final type of franchising is conversion franchising. This franchising model is designed to bring formerly-independently-operating businesses together under the collective power of a national name and advertising. An example of the conversion franchising is Century 21 Realtors, an affiliation of previously-established real estate agents.

Franchise fees typically include a lump-sum entrance fee and other charges for regular services including royalties on sales, advertising fees, and marketing. In exchange for these licensing fees, the franchisor retains control over the delivery of the products and services, as well as marketing and the operational and quality standards of the franchise. The franchising company's revenue is generated through the franchisee that pays these on-going sales royalties, typically averaging 5 percent of sales. The contract, or franchise agreement, is signed by both parties and establishes the relationship between the franchisee and the franchisor. It also details the responsibilities of both sides.

Franchises include such popular names as Kentucky Fried Chicken (KFC), McDonald's, 7-Eleven, Body Shop, Tie Rack, Pizza Hut, and Jiffy Lube. These franchise operations have well-established names, brands, and reputations. The best franchises provide a strong brand or trademark of the concept, a proven business system, extensive training and product development, along with a number of initial and on-going managerial support services. Some help the franchisee secure funding and offer benefits, including discounted supplies. Typically, the franchised business is less risky than other forms of new venture creation because the business idea has been tested. There are mutual advantages to both parties to the agreement. The Service Corps of Retired Executives (SCORE), a volunteer group involved in counseling would-be entrepreneurs, report franchises are safer that other business forms and report less than a 5 percent failure rate compared to an 80 percent five-year failure rate for independent businesses and a 90 percent failure rate from independent restaurants. Banks are also supportive of the franchising business model and many will offer up to 70 percent of the initial capital costs.

Franchising allows a business to rapidly expand beyond its original owners. The franchisee pursues a new business, experiences the advantages of running their own business and being their own boss, and can gain wealth through a proven business idea. They provide the management skills to run the business, as well as contribute the capital to fund the opening and ongoing operations. The franchisor also benefits by the partnership and gains economy of scope advantages as more franchises are established. National or international advertising is then possible and the franchisor can more easily expand business locations with the help and capital from the franchisee. The franchisee helps to build brand awareness through market proliferation. The franchisee has a unique opportunity to run a business with a greater chance of success. There is experience from the franchisor for starting the business and many of the initial mistakes have been made and corrected.

The franchisee creates their own job and often creates a number of new jobs in the area as they hire employees. As the franchise becomes successful, the franchisee may chose to open other stores to create even more wealth. Franchising is popular in the United States as well as internationally. Franchising is at a mature level in the U.S., Europe and Australia, while Asia, South America, Mexico, and Central America report rapid growth. China, too, is experiencing franchise business growth.

It is important to carefully perform initial due diligence to thoroughly examine the franchise offering. A Federal Trade Commission (FTC) rule was created and adopted in the mid-1970s that requires franchisors to disclose to franchisees very specific information including information about themselves, the business, and the terms of the relationship. This document is the Uniform Franchise Offering Circular (UFOC) and provides important legal information about the franchisor and its franchising program.

When deciding on a franchise, it is important to first gather information about an individual's personal goals for business ownership and to examine the franchise offering to find a compatible opportunity. While there are no guarantees in franchising, a well-developed operating plan is often an advantage. An entrepreneur should consider a number of issues regarding a possible franchise. For example, is the franchise in only a state or local market, or does it have a regional or national presence? Lower-risk franchises have a national presence and benefit from the size advantage. The franchisee will also want to consider if most of the existing outlets are profitable, and whether the franchise is the market leader with the largest market share among competitors. The entrepreneur should evaluate the presence of a national marketing and purchasing program. The lower-risk franchises also have documented training, manuals, field support, marketing and promotion, standardized operating procedures, and on-going feedback channels between the franchisor and the franchisees. The terms of the license agreement vary from less than ten years to more than twenty years and some have automatic renewal. Capital requirements for obtaining the franchise also vary. Other factors to consider include territory limitations, failure rates, and any relevant litigation history against the franchise. Investment requirements should also be clearly disclosed.

It is often a good idea to interview existing franchise owners to determine if start-up costs and processes are realistic. The expertise of a lawyer may be required to negotiate and interpret the franchise agreement contract. SCORE also recommends that potential franchising clients plan and analyze their options. This planning and analysis should include researching Chamber of Commerce and Better Business Bureau records for a given franchise. SCORE agrees the most important step for choosing a franchise is also considering the entrepreneur's interests, personal skills, and experience. It is easier to evaluate an established franchise than a new franchise. There may be few, if any, owners with whom to speak about the franchise. It is important that the new franchise have strong franchisee support and a proven business system. The business strategy should also be examined carefully.

FRANCHISING AND THE ECONOMY

A study by the International Franchise Association (IFA) revealed that more than 9.7 million people are employed by franchised businesses. This group of 767,483 franchises, ranging from automobile dealers to food operations, have a $506.6 billion U.S. payroll. These businesses are clearly important to the economy. The IFA also reports that the start-up costs for franchising can range from less than $5,000, to more than $500,000. IFA offers information on franchising—including news and events as well as discussion forums and education. It also includes information on government regulations for franchising.

In a 2004 study conducted by Pricewaterhouse-Coopers (for the International Franchise Association Educational Foundation) on the economic impact of franchised businesses, more than 760,000 franchised businesses exist in the United States and they generate some $1.53 trillion each year. This represents 9.5 percent of the private-sector economic output in the United States. These franchises generate one out of every seven jobs in America.

The IFA established a Franchise Index to track the market performance of the top fifty U.S. public franchisors. The index has increased steadily since January 2000, compared to a drop of 20.1 percent in the Standard and Poors (S&P) 500 Index over the same period. Interestingly, the franchise index has grown during tough economic times. Thus, franchising is a major economic force and franchising has a significant impact on the nation's economy.

The franchising business model attracts a number of qualified individuals, particularly in times of recession or slow business growth. Individuals are attracted to franchising through the opportunity to create their own jobs. While franchising is not a get-rich-quick proposition, many do have attractive returns on investment. Most analysts agree a three- to five-year period of hard work and dedication is needed before the franchised business is profitable. Over the years, more individuals are touting the advantages and value of franchising. These franchises are quick to pick up on key business trends, social and demographic changes, and changing lifestyles—healthy fast food, home health care for the elderly, pet care, education, personal services, home services, business services, automotive services, and travel services. Many also offer exclusive territories in a given market.

While there are many advantages to franchising, there are some disadvantages. Once a business grows beyond a certain size, it could make more money if it were wholly owned, since a percentage of the profit margin goes to the franchisor. Even if a franchise is capable of making strong profit figures, the individual running the franchise needs to enjoy the process of dealing with the franchisor as well as operating the business. The franchisee needs to be committed to the idea and the business model. The individual also needs to be supportive of the franchisor's system since the key to a successful product or service is the consistency of the offering. Customers expect a similar product or service from a franchise. Individuals who do not want to follow the predetermined structure and operating procedures of the franchise may not be successful.

The franchising arrangement is a balance of entrepreneurial spirit, standard business procedures, and following instructions. The venture, like other start-ups, will require a time and energy commitment as well. A disadvantage for the franchisor is the difficulty encountered in finding a franchisee with drive, energy, and business experience to run the business according to the franchise guidelines. The franchise also needs an appropriate location that must be researched to discern its current and future growth potential. Finally, the franchisee must provide some of their own funds for the start-up.