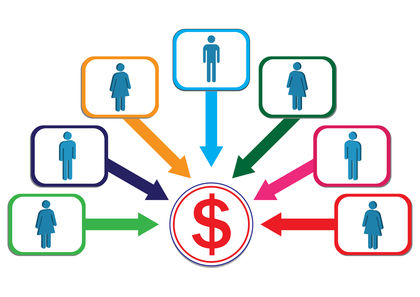 Profit sharing is an organizational incentive plan whereby companies distribute a portion of their profits to their employees in addition to prevailing wages. Profit sharing can generate benefits to the company by fostering greater employee cooperation, reducing labor turnover, raising productivity, cutting costs, and providing retirement security. Profit sharing gives employees a direct stake in the profitability of a company, creating an atmosphere in which employees want the business to succeed as much as management does. The annual U.S. Chamber of Commerce Employee Benefits Survey shows that approximately 19 to 23 percent of U.S. companies have offered some form of profit sharing since 1963. According to the Profit Sharing/401(k) Council of America, 700,000 American businesses offered defined contribution plans (including profit sharing and 401(k) plans) to their employees in 2003. These plans covered 62.5 million American workers and contained $2.4 trillion in assets.

Profit sharing was quite common in primitive fishing and farming economies; in fact, it still persists among fisherman in many parts of the world. Albert Gallatin, Secretary of the Treasury under Presidents Jefferson and Madison, introduced profit sharing into his New Geneva, Pennsylvania, glassworks in the 1790s. Profit-sharing plans as we know them today were developed in the 19th century, when companies such as General Foods and Pillsbury distributed a percentage of their profits to their employees as a bonus. The first deferred profit-sharing plan was developed in 1916 by Harris Trust and Savings Bank of Chicago. Profit sharing was also instrumental during World War II, enabling wartime employers to provide additional compensation to their employees without actually raising their wages.

There are three basic types of profit-sharing plans:

It is becoming less common for companies to manage their own accounts, due to the fiduciary responsibilities and liabilities involved with them. Instead, companies typically contract the responsibility to financial management firms. The amount of future benefits depends on the performance of the account. The balance of the account will include the employer's contributions from profits, any interest earned, any capital gains or losses, and possibly any forfeiture from other plan participants, which may occur when participants leave the company before they are vested (that is, eligible to receive the funds in their accounts); the funds in their accounts are then distributed to the other employees' accounts.

The time required to become fully vested varies from company to company. Immediate vesting means employees are entitled to the funds in their accounts as soon as their employer makes the contribution. Some companies utilize partially vested schedules, entitling employees to, say, 20 percent of the account before gradually becoming fully vested over a period of time. Establishing a vesting schedule is one way to limit access to the account. Another way is to create strict rules as to when payments can be made from employees' accounts, such as at retirement, death, disability, or termination of employment.

Individual companies may determine the amount of their contributions in one of two ways. One is a set formula written into the plan document. Formulas are commonly based on the company's pre-tax net profits, earnings growth, or another measure of profitability. Some companies determine a certain amount to contribute each year, settled on by the board of directors.

Many companies incorporate profit-sharing plans when economic times are hard and they are unable to provide guaranteed wage increases. Chrysler Corporation, for example, developed a profit-sharing plan for its union and non-union employees in the economic recession of 1988. The plan was incorporated into the union contract in exchange for wage concessions made by its workers. Although harsh economic times made contributions small, by 1994 (when the economy had recovered) Chrysler was paying an average bonus of $4,300 per person to 81,000 employees, for a total of about $348 million.

Many companies are also encouraged to develop profit-sharing programs because they provide significant tax advantages, which can benefit higher-paid as well as lower-paid employees. IRS regulations allow the deductibility of the employer's profit-sharing contributions as a business expense and also allow the deferral of this money into a trust without any tax liabilities until the money is received (usually at retirement, disability, death, severance of employment, or under withdrawal provisions), at which point the employee is usually in a lower tax bracket.

The Employee Retirement Income Security Act (ERISA), which was passed on September 2, 1974, is the primary legislation regulating the standards for pension plans and other employee-benefit plans. The intent of the ERISA was to protect employee rights under plans such as corporate pensions, deferred profit sharing, stock-bonus plans, and welfare. ERISA does not mandate companies to establish a profit-sharing plan, nor does it require any minimum benefit levels. ERISA did, however, establish guidelines for participation, vesting, funding, fiduciary standards, reporting/disclosing, and plan-termination insurance.

Profit sharing has become one of a new breed of incentives called total system incentives. These incentives link all of the employees of a company to the pursuit of organizational goals. A common misconception of profit sharing is that it is more suited for smaller companies where employees can more easily see the connection between their efficiency and company contributions. In actuality, profit sharing is being successfully utilized in large and small companies, labor-intensive and capital-intensive industries, mass production and job-shop situations, and industries with volatile profits as well as those with stable profits. Profit sharing can reward employee performance, seniority, and thrift, depending on the design of the plan.

Although the concept has experienced a tremendous growth rate, profit-sharing plans do not always work. Roughly 2 percent of deferred plans are terminated annually—some as a result of mergers, others because companies are liquidated or sold. The majority of terminations tend to occur after consecutive years of losses, when investment performance is poor, or when ineffective communication has resulted in lack of employee understanding, appreciation, or interest. Profit sharing may also entail some disadvantages for a company. Such plans may limit the company's ability to reward the performance of individual employees, for example, since the pay for all employees moves up or down according to a formula. At smaller companies, tying employee compensation to often-uncertain profits may result in drastic income swings from one year to the next. Finally, some critics claim that profit sharing may encourage employees to focus only on increasing profitability, perhaps at the expense of quality or other goals.

Girard, Bryan. "Is There an ESOP in Your Company's Future? An Employee Stock Ownership Plan Could Enhance Your Company's Bottom Line." Strategic Finance May 2002.