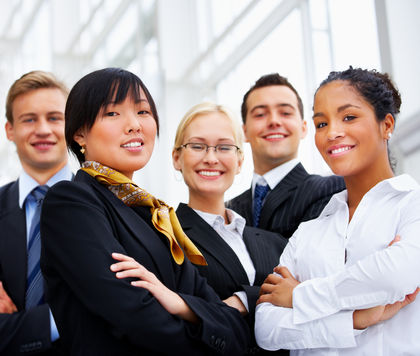 A multicultural work force is one wherein a company's employees include members of a variety of ethnic, racial, religious, and gender backgrounds. Whereas past eras in American business saw few examples of multiculturalism, most of today's small business owners and corporate executives recognize that attention to the challenges and opportunities associated with the growing trend toward culturally diverse work forces can be a key factor in overall business success. "A combination of work force demographic trends and increasing globalization of business has placed the management of cultural differences on the agenda of most corporate leaders," wrote Taylor Cox Jr. "Organizations' work forces will be increasingly heterogeneous on dimensions such as gender, race, ethnicity, and nationality. Potential benefits of this diversity include better decision making, higher creativity and innovation, greater success in marketing to foreign and ethnic minority communities, and a better distribution of economic opportunity. Conversely, cultural differences can also increase costs through higher turnover rates, interpersonal conflict, and communication breakdowns."

TRENDS IN CULTURAL DIVERSITY IN AMERICA

The United States has always been an immigrant culture. Aside from Native Americans, the entire population has immigrant origins. The traditional view toward immigrants was that they would wish to assimilate to the dominant Anglo-Saxon population of the nation's earliest colonial settlers. According to the traditional view, however, the assimilation process was never expected to be total. Each group would add a distinguishing contribution to the overall national culture so that in time the myriad immigrant groups would alter the cultural norms of the rest of the nation in subtle ways. This philosophy was summed up in the notion of the country as the "American melting pot." But this conception of the nation was predicated on the willingness of the immigrant—and the demands of the dominant culture—to discard or at least sublimate unfamiliar cultural practices and attitudes, especially in work place settings. Additionally, during some periods, certain groups were deemed to be unable to assimilate no matter how much they were willing to bury their cultural differences with the dominant culture. A variety of peoples have been victimized by this attitude over the years, including African Americans, Asian Americans, and members of the Jewish religious faith.

The Civil Rights movement of the 1960s, however, had a direct effect on the assimilationist norm of the melting pot. It changed the view of the United States as a single culture welcoming those different from the dominant norm only if they would only drop their ethnic or cultural distinctiveness. The double standard as applied to certain groups of Americans came under scrutiny; the belief in integration into a dominant norm was questioned. Assuredly, such reexamination took place within the long-dominant native-born, white, non-Hispanic community. But perhaps the most significant impact of the Civil Rights movement was that immigrants and distinctive native-born minority groups began, as Stephen Steinberg argued in The Ethnic Myth, "to affirm their right to a separate identity within the framework of a pluralist nation."

The re-examination of the desirability of the domination of the work force by a culturally monolithic norm led to laws that required businesses to provide culturally diverse groups with greater opportunities to enter the work place. Title VII of the Civil Rights Act of 1964, for example, made it unlawful to discriminate on the basis of race, color, national origin, or religion. Equal opportunity for employment allowed for the entry into the American work force of increasing numbers of individuals from cultural groups that had historically been victims of discrimination. This, in turn, led groups that had attempted to assimilate to question their decision to subsume their own cultural values to the dominant norm. Thus, even within the historically favored white community, ethnic groups began to see benefits in returning to—or at least not hiding—their own cultural differences. Finally, as longstanding barriers to integrated work forces crumbled, increasing numbers of companies came to recognize both the business value of multicultural work forces and the negative repercussions associated with an inability or unwillingness to accommodate such demographic changes.

TODAY'S CHALLENGES Not all people in organizations value diversity. As a rule, people are most comfortable with those like themselves and emphasizing diversity may undermine that comfort level. Diversity tends to breed new approaches to old practices and long-standing problems. Individuals in organizations may find such change troubling. Moreover, individuals with strong prejudices against certain groups may find rapidly changing demographics in the work force threatening either because they find change itself disquieting or because they hold a position they feel they might not be able to maintain if groups historically excluded from their work place are allowed to compete in an unhindered way for their positions.

Given such realities, R. Roosevelt Thomas, Jr. indicated in Beyond Race and Gender that companies need to go beyond simple recognition of cultural diversity to active diversity management: "Managing diversity is a comprehensive managerial process for developing an environment that works for all employees." Diversity management is an inclusive process since all employees belong to a culture, including those from the organization's traditionally dominant cultural group. Thomas indicated that diversity management must not be viewed as "an us/them kind of problem to be solved but as a resource to be managed." Anthony Carnevale and Susan Carol Stone, authors of The American Mosaic, have emphasized that valuing diversity involves "recognizing that other people's standards and values are as valid as one's own," and note that for most organizations, valuing and managing diversity requires nothing less than cultural transformation. This is a prodigious task, for it requires people—especially those of the dominant culture—to let go of their assumptions about the universal rightness of their own values and customary ways of doing things and to become receptive to other cultures.

In this regard, cultural diversity in the work place mirrors many of the same issues at play in the realm of international business. In international business inter-actions, people who have learned differing conceptions of normative behavior are forced to suspend judgment of one another. Cultural norms shift relative to language, technological expectations, social organization, face-saving, authority conception, nonverbal behavior and the perception of time.

Taylor Cox Jr., an expert in the field of organization behavior, cited three primary organization types in the realm of cultural diversity development. Most U.S. businesses, he indicated, generally fall within one of the three models. The first of these types, called the monolithic organization, is characterized by a homogeneous work force composed primarily of while males with few women or minority men in management positions (although he contended that this type of organization can exist in any situation where one "identity group"—blacks, Hispanics, etc.—is dominant). Moreover, many of these organizations feature high levels of occupational segregation, with women and minority men concentrated in lower-paying occupations. This environment, noted Cox, makes it a practical necessity for women, minority men, and foreign nationals who do enter the organization to accept the organizational norms already in place (which of course were put together by white males).

Cox pointed out that, ironically, "one positive note [of the monolithic organization] is that intergroup conflict based on culture-group identity is minimized by the relative homogeneity of the work force." But he also noted that since this organization type generally places little importance on the integration of cultural minorities, discrimination and prejudice is likely to be prevalent: "Aside from the rather obvious downside implications of the monolithic model in terms of under-utilization of human resources and social equality, the monolithic organization is not a realistic option for most large employers in the 1990s." But Barbara Jorgensen observed in Electronic Business Buyer that it can be difficult for owners and managers to turn such organizations around, especially if they are big and their work force is entrenched: "Managing diversity is a lot like implementing quality: it's tough to define and it requires a massive culture change. You can't even apply statistical process control to it."

The second organizational type is the plural organization. Cox contended that this model is an improvement over the monolithic organization in several important respects: "It has a more heterogeneous membership than the monolithic organization and takes steps to be more inclusive of persons from cultural backgrounds that differ from the dominant group." Examples of such initiatives include hiring and promotion policies that may give preference to minorities, training on equal opportunity issues, and reviews of compensation systems to ensure fair treatment of all workers. These improvements also spur greater levels of social interaction between members of different backgrounds, and greater identification with the organization among minority members.

But many companies that have such precautions in place maintain management teams with little minority representation, an indication that principles of multicultural management have not infiltrated all levels of the company. And Cox suggested that this "affirmative action approach to managing diversity" has spurred charges from white males that such policies "discriminate against white males and therefore perpetuate the practice of using racioethnicity, nationality, or gender as a basis for making personnel decisions…. This backlash effect, coupled with theincreased number of minorities in the organization, often creates greater inter-group conflict in the plural organization than was present in the monolithic organization."

The third organizational type described by Cox is the multicultural organization. Primary characteristics of this kind of organization include integration of minorities into all structural levels of the company, including management/executive positions; integration of informal/social networks of the business; absence of prejudice and discrimination; and a mindset that not only accommodates diversity (a hallmark of the plural organization) but also values that diversity.

KEYS TO EFFECTIVE CREATION AND MANAGEMENT OF A MULTICULTURAL WORK FORCE

Experts indicate that business owners and managers who hope to create and manage an effective, harmonious multicultural work force should remember the importance of the following:

"Increased diversity presents challenges to business leaders who must maximize the opportunities that it presents while minimizing its costs," summarized Cox. "The multicultural organization is characterized by pluralism, full integration of minority-culture members both formally and informally, an absence of prejudice and discrimination, and low levels of inter-group conflict…. The organization thatachieves these conditions will create an environment in which all members can contribute to their maximum potential, and in which the 'value in diversity ' can be fully realized."