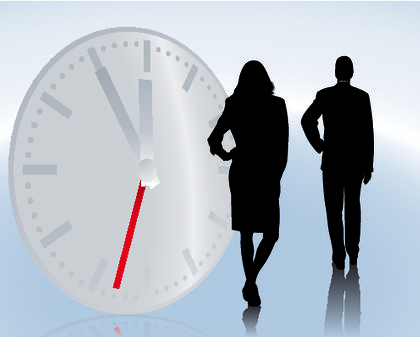 Part-time employees are those who—whether by personal choice or due to employment conditions beyond their control—work fewer hours than the regular, full-time staff of a business over the course of a year. Many small business owners rely on a blend of full- and part-time employees to attend to basic operational needs, although some industries rely more heavily on one type or another. Retail sectors, for instance, utilize large percentages of part-time employees, while the work force of many manufacturers and service providers tends to be primarily composed of full-time employees.

Studies indicate, however, that there seems to be a general across-the-board trend toward part-time status in the American workplace. Small business establishments are an important component of this trend. As Elwood N. Chapman stated in Human Relations in Small Business, "the majority of these part-timers will be recruited and managed by small business organizations." Business consultants indicate that each small business needs to determine for itself how to compose its work force in this areas, weighing the benefits and drawbacks associated with each type of employee.

Federal law defines a part-time employee as one who works less than 1,000 hours a year for the same firm. This annual total averages out to about 17.5 hours per week. In reality, however, part-time employees may work more than 30 hours a week without gaining designation as full-time employees. Analysts admit, however, that the distinction between full- and part-time work grows quite hazy when an employee works more than 30 hours a week, and many consultants counsel small business owners who ask workers to put in weekly time above that threshold to consider making them full-time employees, especially if they are not providing any benefits to the employees when they work under "part-time" designations.

According to the U.S. Bureau of Labor Statistics, 18.3 percent of the work force in the United States in the mid-1990s consisted of part-time workers. Studies indicate that the overwhelming majority of these employees turned to part-time work not because of their inability to secure full-time employment, but because of the scheduling flexibility that part-time work offers. Some studies, for instance, state that more than three out of four part-time employees voluntarily work on that basis.

Analysts cite four primary demographic categories into which most part-time employees fall. These are: 1) Retirees, who may want to supplement a fixed income or ensure that they maintain a certain level of involvement in the world around them; 2) Parents, who choose to have one member of their partnership work on a part-time basis so that more time can be spent raising children; 3) Students, who embrace part-time employment as a way to make money without interrupting their education; and 4) Temporary agency workers, who sometimes become part-time employees of a particular establishment over time.

Chapman noted, however, that there are disadvantages associated with part-time employees as well. One of the major drawbacks, he wrote, is that "parttimers are less committed to their jobs; they usually have a long-term goal that is more important. This causes them to be less stable and dependable." Indeed, it is a basic business reality that the turnover rate among part-time positions is significantly higher than the rate among full-timers.

Other disadvantages cited by Chapman included:

Late 1990s studies of American businesses indicate that although part-time employees are more likely to receive benefits than they were even a few years before, many still are not compensated

with benefits packages. These reports also indicate that small business owners are less likely to offer additional benefits in such realms as paid vacation, health insurance, etc., than their larger counterparts, largely because of their more modest financial positions. Another key factor in determining the likelihood of a part-time worker receiving benefits was the number of hours worked, according to a survey of 505 employers by Hewitt Associates.

Hewitt consultant Carol Sladek predicted that the trend toward increasing benefits for part-time workers would continue in the twenty-first century. "Employers have finally started to realize that the part-time work force is here to stay," she told Lee Fletcher in Crain's Detroit Business. "It's not something we're just doing to be nice, it's not something to help women come back from maternity leave, it's not just something that we do for shift workers to help with scheduling. There are a lot of good, talented people out there who are choosing to work fewer hours, for whatever reason."

In addition to offering benefits, Entrepreneur magazine provided several other tips for small businesses hoping to improve the morale and productivity of part-time employees. For example, experts suggest providing new part-time workers with an orientation to acquaint them with the company's operations and goals. It may also be helpful to give them a tour of the facility and introduce them to full-time staff members with whom they will be working. Experts also recommend that small businesses offer training to part-time workers in order to "enhance and expand their skills beyond basic job knowledge, and to groom part-timers for eventual full-time positions." Finally, small businesses may benefit from creating an inclusive environment that recognizes the value contributions of part-time workers. This may involve such simple tactics as celebrating part-time employees' birthdays or inviting them to participate in company social events or sports teams.

THE RETAIL INDUSTRY AND PART-TIME EMPLOYMENT

Many types of businesses rely on part-time employees to one degree or another, but historically, few industry sectors have counted on part-timers to the extent that the retail sector has. Indeed, the unique operational needs of retail establishments make the part-time employee an ideal one in many respects. "For retailers, seasonal buying patterns, year-round promotional activities, and ever-changing consumers demand a flexible work force," wrote Tracy Mullen in Chain Store Age Executive with Shopping Center Age. Retail stores also register major savings in benefits because of the composition of their work force.

But, as Mullen indicated, the retail industry would not be able to employ an estimated seven million part-time workers if those employees did not receive some rewards in return. "For most of these employees, the inherent value in part-time retail employment is [scheduling] flexibility," said Mullen. But she goes on to note that "another big draw for part-time retail employment is the discounts on merchandise. Part-time employees don't get a part-time discount on goods. While the average retail wage is far above the minimum wage at $8 per hour, who can say how much more that hourly wage is worth when you factor in the 20 percent to 40 percent discount part-timers enjoy?"

Clark, Scott. "Part-Time Employees Can Be a Smart Solution." Birmingham Business Journal. May 26, 2000.

"Perks Work: Tips for Making Part-Time Employees Give Their Best." Entrepreneur. May 1999.