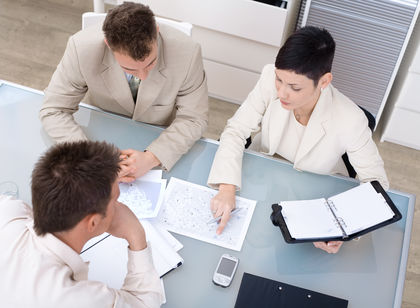 A quality circle is a participatory management technique that enlists the help of employees in solving problems related to their own jobs. In their volume Japanese Quality Circles and Productivity, Joel E. Ross and William C. Ross define a quality circle as "a small group of employees doing similar or related work who meet regularly to identify, analyze, and solve product-quality and production problems and to improve general operations. The circle is a relatively autonomous unit (ideally about ten workers), usually led by a supervisor or a senior worker and organized as a work unit." Employees who participate in quality circles usually receive training in formal problem-solving methods—such as brainstorming, pareto analysis, and cause-and-effect diagrams—and then are encouraged to apply these methods to either specific or general company problems. After completing an analysis, they often present their findings to management and then handle implementation of approved solutions.

Although most commonly found in manufacturing environments, quality circles are applicable to a wide variety of business situations and problems. They are based on two ideas: that employees can often make better suggestions for improving work processes than management; and that employees are motivated by their participation in making such improvements. Thus, implemented correctly, quality circles can help a small business reduce costs, increase productivity, and improve employee morale. Other potential benefits that may be realized by a small business include greater operational efficiency, reduced absenteeism, improved employee health and safety, and an overall better working climate. In their book Production and Operations Management, Howard J. Weiss and Mark E. Gershon called quality circles "the best means today for meeting the goal of designing quality into a product."

Quality circles were originally associated with Japanese management and manufacturing techniques. The introduction of quality circles in Japan in the postwar years was inspired by the lectures of W. Edwards Deming (1900-1993), a statistician for the U.S. government. Deming based his proposals on the experience of U.S. firms operating under wartime industrial standards. Noting that American management had typically given line managers and engineers about 85 percent of the responsibility for quality control and line workers only about 15 percent, Deming argued that these shares should be reversed. He suggested redesigning production processes to more fully account for quality control, and continuously educating all employees in a firm—from the top down—in quality control techniques and statistical control technologies. Quality circles were the means by which this continuous education was to take place for production workers.

Deming predicted that if Japanese firms adopted the system of quality controls he advocated, nations around the world would be imposing import quotas on Japanese products within five years. His prediction was vindicated. Deming's ideas became very influential in Japan, and he received several prestigious awards for his contributions to the Japanese economy.

The principles of Deming's quality circles simply moved quality control to an earlier position in the production process. Rather than relying upon post-production inspections to catch errors and defects, quality circles attempted to prevent defects from occurring in the first place. As an added bonus, machine downtime and scrap materials that formerly occurred due to product defects were minimized. Deming's idea that improving quality could increase productivity led to the development in Japan of the Total Quality Control (TQC) concept, in which quality and productivity are viewed as two sides of a coin. TQC also required that a manufacturer's suppliers make use of quality circles.

Quality circles in Japan were part of a system of relatively cooperative labor-management relations, involving company unions and lifetime employment guarantees for many full-time permanent employees. Consistent with this decentralized, enterprise-oriented system, quality circles provided a means by which production workers were encouraged to participate in company matters and by which management could benefit from production workers' intimate knowledge of the production process. In 1980 alone, changes resulting from employee suggestions resulted in savings of $10 billion for Japanese firms and bonuses of $4 billion for Japanese employees.

Active American interest in Japanese quality control began in the early 1970s, when the U.S. aerospace manufacturer Lockheed organized a tour of Japanese industrial plants. This trip marked a turning point in the previously established pattern, in which Japanese managers had made educational tours of industrial plants in the United States. Lockheed's visit resulted in the gradual establishment of quality circles in its factories beginning in 1974. Within two years, Lockheed estimated that its fifteen quality circles had saved nearly $3 million, with a ratio of savings to cost of six to one. As Lockheed's successes became known, other firms in the aerospace industry began adopting quality circles. Thereafter quality circles spread rapidly throughout the U.S. economy; by 1980, over one-half of firms in the Fortune 500 had implemented or were planning on implementing quality circles.

In the early 1990s, the U.S. National Labor Relations Board (NLRB) made several important rulings regarding the legality of certain forms of quality circles. These rulings were based on the 1935 Wagner Act, which prohibited company unions and management-dominated labor organizations. One NLRB ruling found quality programs unlawful that were established by the firm, that featured agendas dominated by the firm, and addressed the conditions of employment within the firm. Another ruling held that a company's labor-management committees were in effect labor organizations used to bypass negotiations with a labor union. As a result of these rulings, a number of employer representatives expressed their concern that quality circles, as well as other kinds of labor-management cooperation programs, would be hindered. However, the NLRB stated that these rulings were not general indictments against quality circles and labor-management cooperation programs, but were aimed specifically at the practices of the companies in question.

But successful quality circles offer a wide variety of benefits for small businesses. For example, they serve to increase management's awareness of employee ideas, as well as employee awareness of the need for innovation within the company. Quality circles also serve to facilitate communication and increase commitment among both labor and management. In enhancing employee satisfaction through participation in decision-making, such initiatives may also improve a small business's ability to recruit and retain qualified employees. In addition, many companies find that quality circles further teamwork and reduce employee resistance to change. Finally, quality circles can improve a small business's overall competitiveness by reducing costs, improving quality, and promoting innovation.

According to quality circle can help to reduce the cost in small business, improve the communication between the workers and the management, the management should be awareness of employee job-related concerns in personal growth and development. Quality circle has some advantages such as enhance decisions making skills that help to make the best decisions possible w/ any information to be available. Also will work out the importance of individual factors and choose the best course to take. Improve motivation is when many organizations find that flexibility in job design, increase longetivity with the company, improve productivity and better morale. So quality circles is meeting the goal of design quality in the product and the employee participation in the company.
2
Anura

This system is good for keeping a good industrial relations.
3
Bob Cruz

Please tell me what are the Six Sigma in detail. I need to know and understand what are this six factors.
4
supaporn

It is very good information QCC activity as well as I need an example QCC for service industrial.