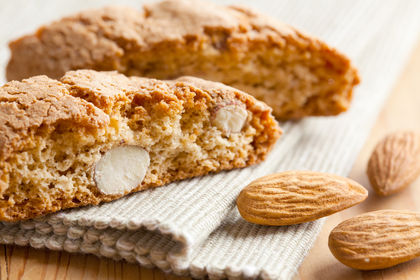 The Italian Eatery seeks funding to introduce a product capaitalizing on Amercans' desire for products with a European flavor. Different from the typical American confection, Biscotti Rosa will be manufactured by a young enterprise seeking to reach a national market. This plan will offer an example of initiating a venture based on an innovative food concept .

"Cookies, steel, car dealerships and laundromats can produce as much profit and growth as computers and biotechnology."

The name of this business is The Italian Eatery. It is a young business initiated in February, 1993. Currently, the business is a sole proprietorship engaged in the production, wholesale sales and distribution of Biscotti Rosa (cookies). This plan has been written as a business operating guide and a finance proposal for investors.

Biscotti Rosa are twice-baked Italian-style cookies. Each cookie measures 4.5-5 inches long, one inch wide, 5/8 of an inch high, and weighs between .75 and 1.25 ounces. There are four varieties: the original almond, hazelnut dipped in bittersweet chocolate, chocolate almond, and anise. Biscotti made with white or red wine is currently being developed.

Biscotti Rosa packaging has consisted of two biscotti facing one another in a bio-degradable cellulose bag. The package is heat-sealed to preserve crispness, with a hole-punched, recycled stock label stapled to the top of the bag. (See Exhibit I.) Recently, a Consumer Survey revealed that customers want to select cookies from ajar, so jars need to be purchased and provided for current outlets that desire them. In most cases, retailers are willing to purchase the jars, so the cost to the company is negligible. Large labels, identifying the variety of biscotti and the ingredients, would be attached to the jars for a minimal cost. Single or double biscotti could be bagged without labels, significantly lowering the cost of sales and labor, and sent out in crush-proof cartons for refilling the jars. Also planned are packages of twelve biscotti, with a net weight of 9-15 ounces depending on the variety, and packages of twenty-four biscotti, with a net weight of 18-30 ounces. Exhibit II is an estimate of design costs for these packages.

Initial sales efforts have been concentrated in the Amarna Valley primarily because of the ease of handling direct distribution. The next immediate step is to facilitate shipping. Biodegradable shipping containers and packing materials will be used to ship all sizes of packages. The costs incurred, from $.40 to $1.83, will be passed on to the recipient as a handling charge. This is a standard industry procedure.

The distinction between biscotti and American cookies is noteworthy, since biscotti are a new faction in the established U.S. cookie industry. Using the universal appeal of cookies, biscotti has the potential for a nonexclusive target market. Five years ago, biscotti were known only to Italian-American communities in larger cities. Now, they tend to be purchased by up-scale urbanites and suburbanites because of the price. (Compare Choco-Wafers at $2.99 per pound with biscotti at $9.95 per pound).

The retail placement of biscotti among gourmet items and the Italian name assumes a certain worldliness of its consumers. Biscotti Rosa is a premium product, competitively priced. It is the only biscotti on the market packaged with an appropriately Italian-style label that announces the name of the product in larger type than the name of the company. This advertising attracts both the uninitiated consumer and biscotti aficionados alike.

Lighter and less sweet than typical American cookies, biscotti appeal to the growing demand for healthier, higher quality food products. Introducing them immediately into the national market is essential to achieving prominence in the growing biscotti industry. Arnold Brothers, a large chain of one hundred twenty-five gourmet stores and catalog company with a growing distribution of over forty million, has requested the twelve-pack biscotti package to test market response in some of their stores. They are now awaiting a prototype of the packaging.

After a successful introduction of Biscotti Rosa into the Arnold Brothers stores, it will be included in their future catalogues. Although the twelve pack boxes must be sold to them at a 21% discount, the resulting "free" marketing through their catalogues would be more than sufficient compensation.

Additional advertising strategy will be to seek free publicity from various printed media through the distribution of a press release. The response to small local businesses which have been featured in local newspapers and magazines has been dramatic in terms of increased sales. Purchasing booth space in specialty food trade shows is another possibility, but only after a following has been established with Arnold Brothers. It is estimated that an average of fifteen pounds of biscotti, with a wholesale value of $65-132, would be given away monthly as samples for in-store demonstrations and charitable donations.

It is partially the success of the competition which has stimulated the formation of The Italian Eatery. The most widely distributed product of similarity is Valentino Biscotti. In 1987, after four years of operation, Gianelli Co. was producing 16,000 biscotti daily. The company is now making 40,000 confections a day. In 1989, Gianelli Co. became a $3.6 million business. The market for biscotti in America has been firmly documented.

Valentino Biscotti are hard, meringue-like cookies. They are difficult to chew, unless dipped in a beverage to soften them. Biscotti Rosa are softer cookies with a buttery consistency. These cookies will hold their shape if dipped, but are easily chewed without dipping. This will encourage the choice of Biscotti Rosa by youngsters and senior citizens who may have difficulty with biscotti, and by others who prefer Biscotti Rosa's richer flavor.

Other competitors include The Marsella Baking Company, with a hard textured biscotti. The Marsella Baking Company is known for their savory toasts, not their biscotti. Two local companies, The Sweetery and Heart's Delight sell a harder and heavier version of the Biscotti Rosa. There are several Italian commercial imports, but none with the texture and taste of Biscotti Rosa.

The Biscotti Rosa single pack is priced at $.33-.42 which compares favorably to Gianelli's single package at an average of $.41 each. The standard cost of goods margin in the food manufacturing industry is 22-23%. In this price range, The Italian Eatery's margin averages 23%.

Although Gianelli Co. occupies a primary position in the market, the distinct differences in taste and presentation of Biscotti Rosa should allow an equally favorable status for The Italian Eatery. The initial advantage of Biscotti Rosa over Valentino Biscotti will be its captivating packaging. The ultimate advantage will be its more widely acceptable and addictive taste.

The current production facility is a licensed commercial kitchen space rented in Portland, Oregon. The monthly rental for the kitchen is $1,200 per month. Presently, the kitchen is being shared at a cost of only $300 per month. It is estimated that production will increase in October of 1995 and monthly rent payments of $600 will be required. By January of 1996, an entire kitchen will be needed for projected production.

Initially UPS will be used for shipping as they have an office within two blocks of the kitchen. Other means of distribution are being researched. A low-mileage Nissan truck is being purchased for $2,000 to be used to pick up supplies, make sales calls, and deliveries.

The Amarna Valley has a good supply of minimum wage workers. Financing advantages are available through the Business Industrial Development Corporation if low-income minority workers are hired. There is also the availability of handicapped workers as well as Amarna Valley College students. Some small equipment must be purchased before hiring any personnel. Other operational costs are listed in the capital spending plan (Exhibit III). The current kitchen facility includes the minimum in large equipment, estimated to be adequate with moderate removable improvements for the next three years of operation. Permanent industrial locations are available for a current average of $.70 per square foot. The Italian Eatery would need 1,500 square feet for a monthly rental of $1,050. At that time, a bank loan could be secured to finance purchase or lease of necessary equipment.

In order to meet the demands for chocolate-dipped biscotti, a chocolate tempering machine would need to be purchased at a cost of $1,000. This purchase should be made well in advance of the 1995 holiday season. The design of a biscotti-cutting machine has been located and the designer estimates a cost of $10,000 to have the machine fabricated. Since it would multiply production at the cutting stage thirty times, its cost can be justified by the savings in labor. This machine could be ordered now and ready for use by January 1996.

My passion for food was intensified during an 18-month sabbatical in Italy from 1976-1978. Upon my return, I spent two years working for an award-winning food service consulting firm. I gained a thorough understanding of the proper commercial kitchen layout and equipment. In 1980, I returned to Italy on behalf of Arnold Brothers to study the successful European franchise of II Palio. Returning to Portland after two months, I orchestrated the American pilot, II Palio Bakery, from three months of preparation through the first six months of operation. This provided me with comprehensive knowledge of every detail required for efficient management of a quality bakery. I acquired additional management experience with my participation in the start-up of Pasta Tante Bella, a stylish Italian deli/restaurant/catering service. A complete resume is available upon request.

As the sole proprietor of The Italian Eatery, I am presently responsible for production, packaging, sales, distribution and bookkeeping. My energy level is high and my confidence in Biscotti Rosa is backed by consumer and retailer response. I have exercised control over all aspects of the business, which has allowed me to monitor mistakes and streamline operations.

My collective expertise has prepared me for introducing The Italian Eatery into the market. Presently, I plan to continue managing all aspects of the business. However, since my strongest skills are in marketing and sales, the hiring of apart-time production assistant and an employee to handle packaging will free me to focus on increasing the market share.

This plan reveals the importance of immediate capital to increase sales by: 1) the designing of twelve-pack boxes for distribution by Arnold Brothers and eventually other outlets; 2) the development of twenty-four pack boxes for the holiday gift market; 3) the hiring of personnel to increase volume of production; 4) the purchase of labor-saving equipment; and 5) purchasing shipping containers to service current outlets more efficiently and to increase market share at the state and national levels. The amount needed for this, as detailed in the capital spending plan, Exhibit III, is $87,000.

Although some assumptions were made, most projections are based on real production capabilities, actual expenses, and estimates from professionals. With persistence, it is realistic to expect annual sales of one million dollars within five years, guaranteeing a generous return on the capital investment.

Enclosed with this plan is the original packaging for Biscotti Rosa. (Not available for publication.)

this bakery plan has really helped me in expanding my knowledge in writting and running my new bakery. thank you so much and send more about bakery business
2
mayassa

This is very informative business plan sample. Thanks for sharing.