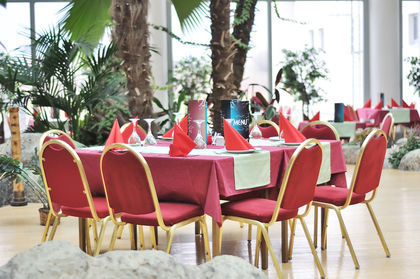 Adopting a 1950s theme, the American Diner intends to serve traditional foods, such as fruit pies and cobblers, freshly baked breads, pot pies, and other "home-cooking" with an eye toward health. The two proprietors, both experienced restauranteurs, intend to draw on their extensive food service backgrounds as they launch their new business. The following plan outlines the strategy the Diner will develop to cater to the growing Timbuktu community in the face of strong competition .

John Doe has worked in food service for over 17 years. In 1984, he established the popular and successful downtown restaurant, Paris Cafe, and as owner, was involved in all aspects of its business for six years until its sale in 1990.

Jane Smith was instrumental in the planning and start-up of The Watering Hole one of Timbuktu's most popular bar/restaurants. She has worked in food service/food retailing since 1980 and has extensive managerial experience.

To acquire $107,000 needed to capitalize the American Diner project, with an estimated payback in five years.

American Diner is designed to create a community atmosphere as a good, old fashioned, friendly, neighborhood cafe. The location at 5409 Lapel St. puts the diner in the heart of lively, downtown Timbuktu.

A priority of American Diner will be serving fresh, healthful fare with all selections made on the premises from "scratch." To keep food costs down, the menu will be simple, yet creative with many interchangeable ingredients. Foods will come from local and regional suppliers whenever possible, with a preference for organically grown products. Emphasis will be placed on the bakery which will feature old-world breads baked daily. A deli counter, fine coffees, and a fresh juice bar will also be showcased.

Setting the mood of a '50s diner with decor, American Diner will be a simple 50-seat cafe with neon signage, checkered tile floors, grey booths with formica/chrome tables, a refurbished pressed-tin ceiling with ceiling fans, and a lunch counter (with the look of an old soda fountain) to match the tables. Only counter service will be offered to keep labor costs low. This will also keep the dining costs reasonable for consumers—self-service with no tipping expenses.

Most of the menu will revolve around baked goods, e.g. pot pies with fresh, flaky crusts, freshly baked breads, pies and cobblers. The deli will offer a choice of fresh mini-loaves for sandwiches. As learned from her experience with the downtown Timbuktu restaurant, Paris Care, a strong need exists for quick, diverse (vegetarian and non-vegetarian), and well-organized carry-out food for the downtown labor force as well as for downtown shoppers. In increasing numbers of single households and dual earner households with limited time for food preparation, many consumers are seeking fast, nutritious meals. College students, another large group of consumers for American Diner, are well-known for their appetite for quickly prepared good food.

Based on projections by the Institute for Public Policy and Business Research at the University of Timbuktu, the Timbuktu population is expected to grow 5-7% in the next five years, during that time, downtown Timbuktu will continue to provide a unique, vibrant, shopping and entertainment center for this region.

To keep food and labor costs low, priority is being placed upon a menu with interchangeable ingredients. For example, today's vegetable special will be in tomorrow's pot pie. The limited menu will be based on "comfort" foods at reasonable prices (Mom's cooking made better).

A pot pie made with fresh, flaky crust with a variety of meat or vegetable fillings.

A deli with a variety of meats, cheeses, and spreads (chicken salad, vegetarian) with a choice of herb or plain French mini-loaves.

To round out meals of pot pie or bierocks and side salads, will be soup-of-the-day and desserts of freshly baked cobbler-of-the-day, cheesecake, baked maple custard and seasonal fruit pies.

Breakfast will emphasize baked goods with a European style breakfast that includes a bread basket with fruit and cheese. Also featured will be freshly baked scones and muffins.

To top it all off, beverages offered will include freshly brewed organically grown coffees (with choices of espresso or cappuccino), hot or iced sun tea, freshly squeezed citrus and vegetable juices, as well as limeades, lemonades and smoothies (blended fruit drinks).

On Sundays, in addition to the regular menu, whole grain waffles (ginger pumpkin) will be offered.

The menu offers a variety of healthful choices-note that there are no fried foods. An advantage of not having fried foods is the savings in operating and service costs that exist with the use of deep fryers.

Timbuktu is the fifth largest city in Utah with a population of 65,000 (80% of the total population for Buck County). The city lies almost mid-way between Capital City and Middleton and Buck County is ranked sixteenth in the U.S. for young adults. Almost a third of the population in Buck County is aged 18 to 24, compared with the U.S. average of 10.8%. Studies have shown that members of this age group are heavy consumers of restaurant fare.

The presence of two institutions of higher learning in Timbuktu provide the area with a progressive-minded clientele. Sporting events, particularly football and basketball, bring visitors from throughout the region. The recent addition of Timbuktu's Mall and the unique downtown shopping area draw people heavily from neighboring cities as well as from out of state. In addition, Buck County and Timbuktu are serving as hosts for an increasing number of conferences and conventions. Downtown Timbuktu is the focus for entertainment with movie theatres, historic Timbuktu Hall (concerts, plays, etc.), a brew pub, an historic hotel, and several successful restaurants. This clustering effect of features creates a large customer base from which to draw.

Although many restaurants exist in Timbuktu, the majority are "fast food." The demand for high quality, sit-down restaurants is evident by the amount of time spent waiting to be seated at most downtown cafes. Upon entering the American Diner, the decor conjures up the feeling of an old-fashioned comfortable diner. The food service concept is a cross between a deli and a coffeehouse, with a full-service bakery, emphasizing an organized, efficient carry-out operation. With this combination of atmosphere, "comfort" food menu, service and carry-out, the American Diner will be unique.

American Diner's strengths relative to the competition lie in the controlled labor and food costs. The simple menu with interchangeable ingredients is designed to keep food costs low. To keep labor costs down, plans include hiring an experienced, versatile staff that is able to both work in the kitchen and out front. As stated earlier, table service will not be offered; strictly counter service will be utilized. This feature will eliminate a number of employees that increase personnel costs in other restaurants. With the growing concern over health and smoking, the cafe will be smoke-free. Another strength for the American Diner is location—the heart of downtown Timbuktu.

Advertising costs will be 1-2% of sales. Believing that radio and print ads are not cost effective, American Diner will spend ad dollars in other creative ways:

Ultimately, the best advertising for the American Diner will be the word-of-mouth from satisfied customers.

The business will be a 50/50 partnership in terms of management. John Doe will oversee the front end and Jane Smith will oversee the bakery/kitchen. All policies will be decided between these two. John and Jane will be involved in every aspect of the business, including the design, menu, food preparation, service and management. The team will hire an experienced manager to oversee the operation when they are not there. Major medical insurance will be provided for John and Jane. After one year of employment, full-time staff will be eligible for insurance.

Since he was a boy in western Utah John Doe has worked in food service in a variety of capacities. Starting out peeling potatoes and graduating to dishwashing at eight years old, he fulfilled a life-long dream when he opened his own restaurant in downtown Timbuktu, the Paris Cafe. The Paris Cafe is still a wildly popular and thriving business at 1 Block St. The restaurant expanded in 1987, doubling its size and adding a bar. At the time of its sale in 1989, Paris Cafe was grossing $1,040,000 per year and employed a staff of 67. John Doe was involved in all aspects of the operation from 1984 up to 1990: managed day-to-day operations, oversaw financial and personnel matters, planned restaurant public relations, and more. John Doe's track record in the restaurant business has illustrated only success.

Jane Smith also comes into this project with a strong food service background. She was instrumental in the planning and start up of Paris Cafe, which is now one of Timbuktu's most popular bar/restaurants. In charge of creating a scheduling system for the staff, she also hired and trained the wait, host and bar staff, dish washers and bus people; and worked closely with the kitchen manager to oversee equipment/food purchases and menu worked as a host/waitress/bartender. Jane Smith's other restaurant experience includes work as baker, waitperson, and hosting at the Paris Cafe as well as baking biscuits, quick breads, danish and desserts as needed daily. A co-manager of Natural Foods from 1981-1985, Jane Smith is again a co-manager at this store. She is a full-time staff member spending half her time as a floor manager and the other half as a supplements/personal care products buyers. During her time as a buyer, sales for her departments have risen significantly. She has a good understanding of food distribution, which will be valuable in her role at the American Diner. To a large degree the success of any food service venture depends on ordering and inventory skills.

The following projections are based on past experience with downtown business in Timbuktu. The equipment and leasehold improvement figures come from estimates given to the management team by suppliers and contractors.

See appendix for a complete breakdown of equipment and start-up costs.

Plans include the purchase of a computer with a software package to do payroll and weekly inventory. The cash register system will track sales by category. An accountant will be hired to take care of quarterly payroll and business taxes.

October, 1988
to April 1989: Manager, Paris Cafe. Duties: supervised the start-up of the restaurant/bar operation, hired and trained the staff, negotiated with suppliers about equipment, helped develop menu, worked as host and bartender.

July, 1985
to April, 1986: Advertising Coordinator, Advertising U.S.A. Duties; coordinated advertising material for two publications and worked as a, telemarketer for one of the publications, part of show management team for the Natural Foods Expo (the Industry's largest trade show).

WORK RELATED ACTIVITIES September, 1984 to June, 1985: Board Member, Board of Directors of Cooperative Warehouse, Timbuktu, Utah, a distributor of natural foods.

August, 1970
to May, 1971: Kitchen Worker, Oceana Restaurant. Duties: worked in kitchen as well as in food serving line.

This is really great site very informative. Thank you for the restaurant business plan I have really learned a lot.