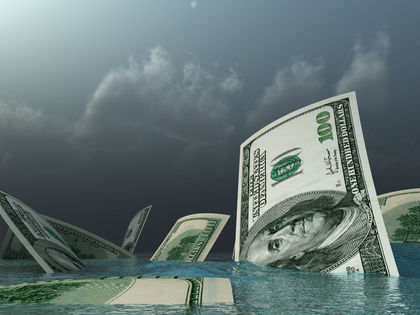 Devaluation refers to a decline in the value of a currency in relation to another, usually brought about by the actions of a central bank or monetary authority. Devaluation is sometimes used more generally to describe any significant drop in a currency's international exchange rate, although usually a decline caused by market forces with no government intervention is termed a depreciation. Devaluations are most often associated with developing countries that don't allow their currency prices to float freely on the open market.

There are essentially two main classes of devaluations: planned policies and reactions to market events. Planned devaluations are brought about almost exclusively by government decisions to deliberately reduce the relative value of a currency, usually intended as a means to some improvement in the country's trading position. Market-driven devaluation, by contrast, is often the formal recognition by a government, frequently during a monetary crisis, that the value of its currency relative to major world currencies—especially the dollar—has already depreciated through trading in the foreign exchange markets. The primary alternative to a decision to devalue a currency in response to market forces is an organized government attempt, either unilaterally or multilaterally, to prop up a sagging currency through coordinated market intervention. Some devaluation scenarios may involve a mix of both deliberate and reactive stimuli; however, both kinds of devaluations are controversial undertakings, and some observers assert that they do not always lead to the intended effects.

THE ROLE OF FOREIGN EXCHANGE
MARKETS

Foreign exchange (FX) markets serve as the principal rate-setting mechanism for the exchange of currencies. In theory, they allow supply and demand to dictate the relative value of world currencies. In practice, they are also a medium for investment (including speculation and hedging) and an efficient means for obtaining or disposing of foreign currencies. As such, foreign exchange markets can give rise to significant rate fluctuations and can create conditions leading to a devaluation.

Most of the major world currencies are influenced by the FX markets, even if they are not completely free from government controls. As in other financial markets, trading in currencies is based on myriad considerations, including rumors and outside analysts' assessments of countries' economic health. When enough currency traders believe the outlook for a particular country is grim, they may cause a sharp depreciation in the international exchange rate for that country by unloading units of its currency onto the market. While such a depreciation is not identical to a devaluation, it may provoke a devaluation depending on the monetary policies of the target nation. If a country imposes currency controls, such as pricing bands that specify a minimum and maximum value at which the currency may trade, it will be forced to choose between either (1) defending the controls by buying units of its own currency (or selling foreign currencies) on the FX market, or (2) lowering the controls—the latter being a devaluation. Often a country's initial reaction is to defend the currency at some arbitrary level, but if the downward pressure on the markets persists, the country may deplete its reserves in a matter of weeks or months and either require assistance from other countries or accept devaluation as the alternative.

A currency devaluation usually comes about when some determination is made that the domestic currency is overvalued relative to major world currencies. It may be used as a policy tool to relieve an unfavorable balance of trade or simply to stimulate fledgling export industries. Such policies assume that devaluation will make the country's exports more attractive abroad and imports from other countries less attractive at home, but in reality other factors may diminish these effects, making a planned devaluation a risky undertaking. Even if conditions at home are suitable for the ideal devaluation scenario, one country's devaluation may trigger a cycle of competitive devaluations by other countries and thereby undermine the initial country's strategy.

At the same time, developing countries in particular are periodically faced with a currency crisis in which they may need to consider devaluation. This can occur when chronic trade deficits, government budget deficits, or other internal weaknesses cause slack demand for a nation's currency, as was the case during the Asian financial crisis of the late 1990s. Although a variety of circumstances fomented this crisis, one of the most profound was a sell-off in the FX markets which led to sharp depreciations in several Asian currencies.

Technically, the biggest cause of devaluations is the existence of rate controls and other government exchange rate policies. If these did not exist, there would of course still be currency depreciations, but never an organized (even if reluctant) effort to allow a currency's value to fall. However, in the interests of stability, nearly all nations practice some form of rate intervention from time to time, whether by occasional targeted transactions on the open market or by a strict regime of price controls. The currencies most vulnerable to devaluation, hence, are those belonging to nations with uncertain economic prospects and with active rate control/support policies.

Still, the attraction of devaluation as a policy is its ease of implementation, and it can be seen as a panacea for an errant small economy with a trade deficit. In the estimation of some government officials, a devaluation is easier for a population to swallow than the harsh structural changes, e.g., voluntary cutbacks in demand for imported goods, that are otherwise necessary to ameliorate current account deficits and promote growth of output.

According to the orthodox theory of international trade found in most textbooks, a planned devaluation is not necessary and is, in fact, disruptive since it interferes with free market forces. In theory, any trade deficit in a relatively open market system will automatically be translated into a decline in the affected country's price levels (via the outflow of money that is assumed to reduce prices and, in turn, depreciate the country's real exchange rate). This, according to the theory, would make that country's goods more competitive, expand its exports, and lead it toward trade balance. A similar process is envisioned for trade surpluses. A controversy arises, however, because it is highly questionable that this process actually plays out in reality. The prolonged study of the effects of devaluation has produced results that are theoretically indeterminate and empirically unconfirmed.

Though its validity is still debated, the theoretical J curve (see Figure 1) supports the argument that a devaluation can indeed have positive effects, albeit not immediately. Indeed, devaluation is expected to worsen the trade balance in the short term—possibly causing a contraction in output and employment—before improving the overall balance. One explanation for this phenomenon is that changes in unit demand often move more slowly than price corrections, causing an immediate decrease in export revenues (due to lower prices) without an initial increase in units to offset it. Another hypothesized influence is known as the Marshall-Lerner condition, which states that the sum of price elasticities (the responsiveness of demand to a change in prices) of imports and exports must be greater than 1.0 if the depreciation is to induce a shift to greater export revenues, and hence, an improvement in the trade balance. Some empirical evidence supports the J curve and suggests that despite its negative effects in the short run, devaluation can lead to improved trade balances.

The effects of a devaluation can be complex and far-reaching. In theory, a weaker currency means that exports from the affected country will be cheaper relative to prices in other countries, and that imports will be more costly. These conditions may provide a boost to an economy that has undergone a devaluation, but typically there are negative consequences as well, both internally and externally. And depending on the nature of a country's trading structure, the benefits may never materialize at all.

For large international corporations, devaluations often translate into lost revenue and decreased profitability in the affected country (assuming the company isn't based there), as companies usually can't raise their prices enough in competitive markets to make up for the losses stemming from the lower exchange rate. Moreover, since devaluations frequently coincide with broader economic turmoil such as inflation, instability in the financial markets, and recession, spending is likely to be tight in countries whose currencies have been devalued, further eroding sales. On the other hand, for companies with substantial export-oriented operations in countries whose currencies have been devalued, the business may be able to enjoy some cost advantages in its labor and materials, enhancing its competitive position abroad.

It is good,add more on the theories and effects of devaluation in developing countries.