This category includes establishments primarily engaged in the retail sale of candy, nuts, popcorn, and other confections. 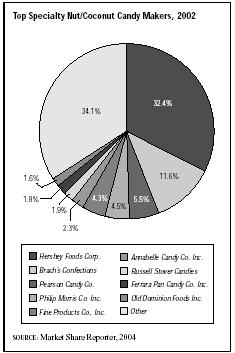 Leading companies in this classification were Fannie May Candy Shops of Chicago, which reported sales of $120 million in 1997. Leaders in 2004 included Godiva Chocolatier, Inc. of New York; Alpine Confections Inc. of Utah; and Candy Express Franchising of Columbia, Maryland. Alpine Confections Inc. was in the process of acquiring some of Fannie May and Fanny Farmer brands from parent company, Archibald Candy Corp. Upon the completion of the acquisition, Alpine may reopen candy shops under the Fannie May, or Fanny Farmer name. According to a report issued by the Food Institute, Archibald planned on closing all its candy stores prior to the sale to Alpine.