Cheese, milk, butter, and other dairy products stores, as well as packaged ice cream stores, are the predominant types of retail establishments found in this group. Like other retail grocery segments, dairy markets underwent a steady downsizing as supermarkets and superstores eroded market share by offering convenience and lower prices. Total annual sales were about $930 million in 2003. 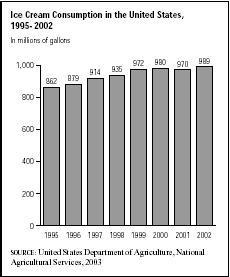 According to D&B Sales & Marketing Solutions, there were 1,973 dairy products stores with a total of 12,603 employees that contributed some $343 million to the overall sales in 2003. The butter and cheese segment had 358 establishments and 1,957 employees that totaled almost $7 million in sales. Milk contributed about $1 million with 454 employees. The largest specialty market with 3,033 establishments was ice cream, which contributed about $56 million in sales.