The U.S. Census Bureau reported 29,920 establishments engaged in the retail sale of household furniture, including beds and springs, cabinet work, juvenile furniture, mattresses, and outdoor furniture in 2001. The industry employed about 278,231 people and generated an annual payroll of $7.5 billion. The total number of establishments grew to 55,553 in 2003, with the number of employees increasing to 334,448. Consumers spent roughly $48.7 billion within this industry. On the average, consumers spent $1.1 million per retail store. States with the majority of furniture stores were California with 7,296, Florida with 4,375, Texas with 4,327, New York with 3,133, North Carolina with 2,194, Georgia with 2,049, Illinois with 2,039, Ohio with 1,748, and New Jersey with 1,638.

The furniture store sector dominated the industry with 39,635 establishments. Combined, they generated sales of $37.9 billion and controlled more than 71 percent of the market. Office furniture followed with 2,623 establishments that shared $3.3 billion in sales. Mattresses numbered 2,518 stores, beds and accessories accounted for 2,162, and outdoor and garden furniture represented 1,034.

The industry is made up of both large national chains, regional stores, and small independent operations. According to data from the U.S. Bureau of the Census, consumers spent $55 billion on furniture and other home furnishings in 1997. But throughout the 1990s the fastest growing segment of the retail furniture trade was through new retailers. These new retailers, which sell household and office furniture, mattresses, and related consumer products, included large discount superstores such as Wal-Mart and Target, warehouse stores like Price Club and Office Depot, and one-stop department stores such as Sears & Roebuck and J.C. Penney. Catalog furniture sales also increased. This new competition made the marketplace a much more difficult one for traditional furniture stores.

Entering the 1990s, the retail furniture industry, like many other retail industries, slumped in the face of a general economic recession. Furniture purchases are considered major, discretionary purchases that can be deferred when tough economic times hit. In 1988, the percentage of disposable income spent for household furniture was about 4.6 percent, but by 1991 this figure had dipped to about 3.9 percent. Moreover, retail sales of furniture are historically predicated on new housing construction, which slumped in the late 1980s, a dry period that lasted until 1992-93. But as the recession of the early 1990s had dragged down sales of household furniture and bedding, the economic resurgence of the middle and late 1990s brought a noticeable uptick in these sales.

Furniture typically used to house electronic components, known as ready-to-assemble (RTA) furniture, was one of the fastest growing consumer product categories during the 1990s, according to the Electronic Industries Association. Designed to hold audio, video, and home office products, this type of furniture is shipped unassembled to the store and then is either assembled by the store or the ultimate consumer. Products include home entertainment centers, television and VCR stands, home office furniture, and furniture designed to hold computers and related equipment. Due to the minimal labor in manufacturing, ease in shipping and inventory stocking, and perceived value versus price, the majority of sales of RTA furniture are made through mass merchandisers, specialty stores, and warehouse clubs. However, due to strong demand, many leading furniture stores have begun to sell RTA furniture. RTA furniture sales are expected to continue to grow to more than $1.3 billion annually. 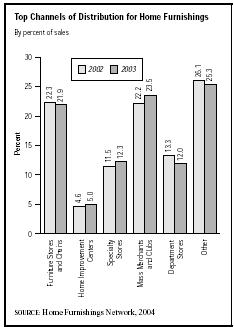 The top ten retailers of furniture and bedding in 1997 were roughly split between stores in the traditional category and those from the department/discount store segment, according to a 1999 report that appeared in Furniture Today Retail Planning Guide, 1999 . Topping the list with sales of roughly $1.7 billion was Heilig-Meyers, a traditional furniture retailer, followed by Levitz, which placed second with 1997 sales of $839 million. Making up the rest of the top 10 were Office Depot ($779 million), J.C. Penney ($747 million), Federated Department Stores ($743 million), Sears ($737 million), Ethan Allen ($736 million), Wal-Mart ($673 million), Rooms To Go ($550 million), and Montgomery Ward ($547 million).

While the economic recession of the early 1990s dealt a blow to the retail furniture industry, primarily due to the bleak performance of the housing industry, increased demand was seen throughout most of the rest of the decade. New housing construction experienced a significant uptrend during the middle and late 1990s, a development that provided a shot in the arm for the retail furniture industry. In 1997, the number of establishments in the industry was put at roughly 48,000, and sales totaled roughly $55.2 billion. As of March 1997, employment in the industry stood at about 386,600 workers.

The former leaders in furniture retailing remain the top performers, all except Montgomery Ward, who went bankrupt after being in business for 128 years, in 2000. A survey conducted by Furniture Today magazine reported that Wal—Mart was the number one performer in furniture sales for 2002. The survey further concluded that the last time a "non—conventional furniture store" sold more furniture than any other retailer occurred 10 years ago. Wal—Mart posted furniture and bedding sales of $1.24 billion. That figure was up 14 percent over 2001.

In 2003, according to the Home Furnishings Network, the "channels of distribution" for furniture retailers stood at furniture stores and chains with 21.9 percent, home improvement centers with five percent, specialty stores with 12.3 percent, mass merchants and clubs with 23.5 percent, department stores with 12 percent, and other segments with 25.3 percent combined.

The Business and Institutional Furniture Manufacturer's Association (BIFMA), in conjunction with Global Insight reported a 8.3 percent decrease in retail sales of office furniture. The slow growth was due to the sluggish economy, and also the lack of office construction. However, the projected sales forecast for 2004 was expected to reach $9.2 billion over $8.14 billion in 2003.

Today's furniture industry faces a more complex and dynamic distribution system than ever before. Traditional retail furniture stores continue to lose ground to their competitors among department stores and the large discount chains. According to the Furniture Today Retail Planning Guide, 1999, the four traditional furniture stores—Heilig-Meyers, Levitz, Ethan Allen, and Rooms To Go—among the top 10 retailers accounted for slightly less than 50 percent of the total sales of the top 10.

Another competitive force at work in the retail furniture marketplace is the increasing number of consumers purchasing furniture and office equipment at nontraditional sites such as warehouse clubs, discount superstores, department stores, galleries, and from catalogs. Large furniture retailers, such as Levitz, and smaller furniture retailers compete with department stores, warehouse clubs, and discount superstores. Smaller retail outlets have found the resultant discount prices necessary to compete in the marketplace especially difficult to maintain.

the entire furntiure business is in a downward spiral. my store is closing due to the industries bottom falling out. a friend of mine at a store in arizona said that 8 sales people were laid off.

what is going on?