The thread industry saw sales decline throughout the late 1990s and early 2000s, with an estimated $410 million worth of products shipped in 2001, compared to $725 million in 1998. The largest component of this category is sewing thread, purchased mainly by the apparel industry. American & Efird, Inc. of Mount Holly, North Carolina, with 2003 sales of $293 million, and Coats North America Consolidated Inc. of Charlotte, North Carolina, with 2003 sales of $334 million, were the largest manufacturers of thread. 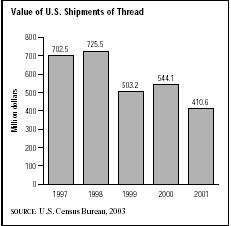 Along with the decline in sales, total thread industry employment figures dropped from 3,595 in 1997 to an estimated 3,120 in 2000. Employment of machinery operators in the textile industry as a whole was expected to decline through the year 2006 because of changing trade regulations and labor saving machinery. Hourly production workers in thread mills earned less, on average, than many of their counterparts in other industries, with pay scales increasing slightly from $7.34 in 1992 to $9.93 in 2000. States with the most thread mills and the highest number of employees in this industry included North Carolina, Massachusetts, and Georgia.

Like most segments of the textile industry, the U.S. thread sector continued to deal with increased international competition as well as a weak domestic economy in the early 2000s. However, the future for thread sales appeared to be good, with natural fibers outselling manmade fibers as demand for carpet, apparel, and household furnishings recovered along with the economy.